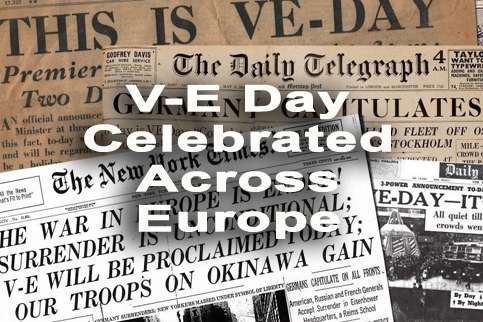 BERLIN – This past weekend marked the 76th Anniversary of Victory in Europe (V-E) Day.   Throughout Europe celebrations marked the event from wreath layings to parades.  Celebrations were again muted owing to continuing Covid-19 pandemic restrictions.

Although a member of the European Union, Ireland does not formally celebrate V-E Day.  Referred to as ‘The Emergency’ owing to the state of emergency throughout Ireland between 1939-1945, saw Ireland maintain its neutrality throughout World War II.  Switzerland, Spain, Portugal and Sweden also declared neutrality during the war.

The 8th of May marks V-E Day, the anniversary of Nazi Germany signing the articles of unconditional surrender marking the end of World War II in Europe.  Several former Soviet bloc countries, including Russia, Belarus and Serbia, celebrate V-E Day on the 9th owing to when the midnight surrender signed in Berlin went into effect in the Central European Time zone.  Many countries proclaim V-E Day a national holiday.

The foundation for World War II was laid when Nazi Germany and the Soviet Union joined together in a secret pact on 23 August 1939 that allowed each to invade Poland and divide it between them.  The Molotov–Ribbentrop Pact contained a Secret Protocol by which Moscow and Berlin bilaterally defined the borders of Soviet and German spheres of influence across Poland, Estonia, Finland, Lithuania and Latvia.

The long rumoured existence of the Secret Protocol was only proven when it was disclosed during the Nuremberg Trials, much to the anger of the Soviet Union.

On 1 September, only a week after signing the pact, Germany invaded Poland.  The Soviet Union quickly established a cease-fire with Japan with whom hostilities had recently broken-out to free up Soviet troops to invade Poland.  On 17 September Stalin ordered the Soviet Union’s invasion of Poland.  Effectively partitioned, Poland disappeared from the map as Hitler and Stalin confirmed their newly established frontier by the Soviet Frontier Treaty.

Russia invaded Poland from the East.  The large-scale, Soviet invasion of Poland deployed up-to 800,000 troops and within weeks resulted in between 3,000 – 7,000 Polish deaths. The outcome of this was the annexation of Poland between the Nazis and the Soviets.  The resulting partition resulted in the Soviets controlling more than 50% of Poland’s territory including effective control over some 13 million Poles.

Estimates are that the Soviets captured 250,000 prisoners during their 1939 invasion of Poland.  As the Soviet Union had not signed-up to any international convention on the rules of warfare the Polish prisoners were denied any discernable legal status.   Consequently, almost all Polish officers were murdered while in Soviet detention with the remaining soldiers deported to forced labour camps.  Civilians fared no better.  Stalin ordered the murder of 22,000 Poles by the Soviet police during the Katyn massacre, in addition to this Soviet police rounded up and executed anyone they deemed as a perceived threat from intellects, politicians to religious leaders.

According to a sociologist, Professor Tadeusz Piotrowski, between 1939–1941, nearly 1.5 million Poles (including both local inhabitants and refugees from German-occupied Poland) were deported from their homeland into the Soviet Union.  Only a small number of these deportees ever returned to Poland after the war.  According to American professor Carroll Quigley, at least 100,000 of the 320,000 Polish prisoners of war captured by the Red Army in 1939 were summarily executed.   It’s estimated that immediately following the partition and annexation of Poland by the Nazi-Soviet allies, between 10,000 – 35,000 thousand prisoners were killed either in prisons or during their harsh deportation into the Soviet Union.

Soviet and Germany troops marked their mutual success in invading and partitioning Poland by conducting joint celebratory events including a Joint Parade at Brest-Litovsk.  The lavish parade included a ‘Victory Arch’ on which the Nazi-Soviet troops placed the Swastika and Red Star side-by-side to formally highlight their status as allies.  German and Soviet troops also celebrated together in Białystok, Grodno, Lwow, Pinsk and other cities.

Soon after the Soviet Union and Nazi Germany allied to begin their territorial aggression in Europe other nations were invaded or drawn into the war by mutual defense pledges or treaties.  France and Great Britain joined the war within days, albeit too late to save Poland.  On the night of 21 June 1941, Adolf Hitler turned on his ally, Joseph Stalin, and ordered German forces to invade Russia.  Stalin, so stunned that his compatriot would betray him, retreated to his dacha, leaving a power vacuum in the Kremlin.  Historians largely agree Stalin suffered a ‘nervous breakdown’.  Given Stalin’s mental incapacity, it fell to Vyacheslav M. Molotov, the Soviet Foreign Minister, to announce to the people the fact of the invasion.

In the years that followed, the Soviet Union and Nazi Germany battled each other over territory from Finland to Ukraine.  The USA and Great Britain, the Free French Forces that escaped after the invasion of France as well as the brave Polish patriots and other European forces that fell under Nazi domination prepared to liberate Europe.   Countless civilians in occupied countries fought guerilla wars to liberate their homelands.  Out of necessity, the USA and Great Britain reluctantly took on the Soviet Union as an ally to buy time for each country to build their forces and marshal the materials necessary for the liberation of Europe.

Russia was unique in how they treated returned Prisoners of War (POWs) during and after the war.  Order No. 270, issued on 16 August 1941, by Joseph Stalin during the Axis invasion of the Soviet Union, ordered Red Army personnel to “fight to the last.”  Stalin essentially banned commanders from surrendering and set out severe penalties for senior officers and deserters were regarded as being derelict in their duties.  Order 270 is widely regarded as the basis of subsequent, often controversial Soviet policies regarding prisoners of war.  Historians often cite Stalin’s words, “There are no [Soviet] prisoners of war, only traitors.”  Hundreds of thousands of Russians returned from the Nazi camps only to go straight into Soviet camps, via NKVD filtration camps with the ultimate destination of the GULAG.

According to footnoted information available at Wikipedia, During and after World War II freed POWs went to special “filtration camps” run by the NKVD. Of these, by 1944, more than 90% were cleared, and about 8% were arrested or condemned to serve in penal battalions. In 1944, they were sent directly to reserve military formations to be cleared by the NKVD. Further, in 1945, about 100 filtration camps were set for repatriated Ostarbeiter, POWs, and other displaced persons, which processed more than 4,000,000 people. By 1946, 80% civilians and 20% of POWs were freed, 5% of civilians, and 43% of POWs were re-drafted, 10% of civilians and 22% of POWs were sent to labor battalions, and 2% of civilians and 15% of the POWs (226,127 out of 1,539,475 total) were transferred to the NKVD, i.e. the Gulag.  Russian historian G.F. Krivosheev gives slightly different numbers based on documents provided by the KGB: 233,400 were found guilty of collaborating with the enemy and sent to Gulag camps out of 1,836,562 Soviet soldiers who returned from captivity.  Latter data do not include millions of civilians who have been repatriated (often involuntarily) to the Soviet Union, and a significant number of whom were also sent to the Gulag or executed (e.g. Betrayal of the Cossacks).

The survivors were released during the general amnesty for all POWs and accused collaborators in 1955 on the wave of De-Stalinization following Stalin’s death in 1953.  While many scholars agree that declassified Soviet archive data is a reliable source, Rolf-Dieter Müller and Gerd R. Ueberschär disagree, writing, “Soviet historians engaged for the most part in a disinformation campaign about the extent of the prisoner-of-war problem.” and claimed that almost all returning POWs were convicted of collaboration and treason hence sentenced to the various forms of forced labour, while admitting that it would be unlikely to study the full extent of the history of the Soviet prisoners of war.  Thousands of Soviet POWs indeed survived through collaboration, many of them joining German forces, including the SS formations.

In the course of the war horrendous crimes against humanity occurred.  Persecution of Jews, Romani, Homosexuals, Freemasons, Catholic clergy and religious, Jehovah Witnesses, Poles, Serbs, Slovenes and others saw them systematically imprisoned in concentration camps with millions subjected to brutal medical experimentation, abuse, torture and attempted extermination.  Many of the human rights laws we enjoy today were established as a result of World War II’s atrocities. As a direct result of the Holocaust, war crimes and crimes against humanity that arose during World War II, a global standard of human rights was articulated in the Universal Declaration of Human Rights 1948.

A hastily prepared act of military surrender was first signed at 02:41 on 7 May in Supreme Headquarters Allied Expeditionary Forces (SHAEF HQ) at Reims.  The finalised document, considered the definitive German Instrument of Surrender, was signed on 8 May 1945 in Karlshorst, Berlin at 21:20 local time, providing for the following at Article 2:

The German High Command will at once issue orders to all German military, naval and air authorities and to all forces under German control to cease active operations at 23.01 hours Central European time on 8 May 1945….

According to the US National Archives, “Once the documents were signed, and Eisenhower recorded a short message for the newsreels and radio, it was time to send official word to Combined Chiefs of Staff, the joint British and American command directing the war in the west.  The officers around Eisenhower tried out several grand statements, hoping to come up with words worthy of the momentous occasion.  The final message came from the Supreme Commander himself—in typical concise, straightforward style:

June 10, 1940 – Italy joins the war on the side of Germany by declaring war against Britain and France.  Fighting spreads to Greece and Northern Africa.

July 1940-September 1940 – Germany and Great Britain fight an air war, the Battle of Britain, along the English coastline.

September 7, 1940-May 1941 – German bombing campaign of nightly air raids over London, known as the Blitz.

December 7, 1941 – Japan attacks the US Navy base at Pearl Harbor in Hawaii, destroying more than half of the fleet of aircraft, and damaging all eight battleships. Japan also attacks Clark and Iba airfields in the Philippines destroying over half of the US Army’s aircraft there.

December 11, 1941 – Germany and Italy declare war on the United States.

1942 – The Allies stop the Axis Powers’ advance in Northern Africa and the Soviet Union.

June 4-6, 1942 – Japan’s plans to invade the Hawaiian Islands, starting at Midway Island, but the United States cracks the code of the mission. Japan attacks Midway and loses four aircraft carriers and over 200 planes and pilots in the first clear victory for the United States.

August 19, 1942 – The battle for Stalingrad begins as Germany pushes further into Russia.

August 1942-February 1943 – US Marines fight for and hold the Pacific island of Guadalcanal.

February 1, 1943 – The German troops in Stalingrad surrender, defeated in large part by the Soviet winter. The defeat marks the halt of Germany’s eastbound advance.

July 25, 1943 – The King of Italy is restored to full power, and Mussolini is deposed and arrested.

April 28, 1945 – Mussolini is killed attempting to escape to Switzerland.

April 29, 1945 – US soldiers liberate the Dachau concentration camp outside of Munich, Germany.

May 7, 1945 – Germany surrenders in a red school house in Reims, Germany, Eisenhower’s headquarters. Victory in Europe (V-E) Day is celebrated on May 8 because that is the day the armistice went into effect.

Minister Byrne to Attend meeting of the General Affairs Council

Minister Byrne to Attend meeting of the General Affairs Council