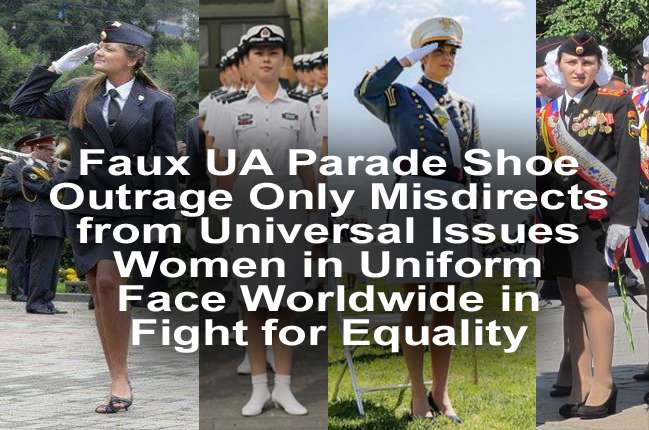 CORK – Images of young Ukrainian soldiers in battledress marching in-step wearing high heels brought almost universal condemnation and ridicule from media outlets around the world.  And it should.

After Russia invaded, then proceeded to occupy parts of Eastern Ukraine and Crimea in 2014, more than 13,000 Ukrainians were killed and over 1.5 million people became internally displaced.  Incensed by the Ukrainian people’s continued movement towards Europe, the then pro-Russian and traitorous Ukrainian President Viktor Yanukovych, whose purposeful machinations made his nation a soft-target for the Kremlin.  Russia, never one to fail to exploit its neighbours, responded in kind and invaded Ukraine using what the OSCE described as large-scale military movements under the guise of humanitarian assistance.

Still, the ill-funded and disorganised military rose to the occasion.  Against all expectations Ukraine stopped the Russian onslaught in its tracks, but not before some territory was lost.  The sacrifices of Ukraine’s military have been great.  Conspicuous amongst them has been the heroic exploits and service of young Ukrainian women, some 31,000 female warriors who volunteered to serve Ukraine, often on the contact line in which Ukrainians are still killed on an almost daily basis by Russian occupying forces.  Those who routinely count amongst the casualties inflicted by Russian invaders and occupiers include females in uniform.  The sacrifice, fidelity to service and commitment to peace, democracy and European values by Ukraine’s women in its hour of need will no doubt be heralded in the annals of history.

In what can only be described as a tone-deaf and clumsy attempt to justify its poor decision to ask its female warriors to march in shoes designed to accentuate females calves for sex-appeal, the Ukrainian Ministry of Defense posted pictures of women in military service in many nations wearing heels while marching.  The photos included women cadets at the United States Military Academy at West Point marching in heels.  Other nations’ military parades, replete with women in heels, were also posted.

It is appalling that in the 21st century women warriors who have proved their equality by service in combat still are being subjected to sexist uniform choices and being asked to parade in uniform clad in evening wear as though they were Donna Reed pushing a vacuum cleaner wearing pearls in the 1950s fantasy depictions of American domestic life.  But this is only part of the problem.

Given the Scale of the Problem – Why the Outrage Directed Only at Ukraine?

When we view photographs of America’s female cadets at its premier military academy wearing heels, or read about Switzerland’s military requiring female soldiers to wear men’s underwear until only two-months ago, or if one bothers to enquire about promotions and advancement for women in uniform, witnessing that it is a universal problem, it begs the question – why the outrage directed at Ukraine?

From media outlets insisting on maintaining the Russian spelling (Kiev) for Ukraine’s capital, Kyiv to using the Russian spelling of the name of Ukraine’s President (Zelensky) instead of the Ukrainian Zelenskyy, there is a pre-disposition in the world media to not only ignore that Ukrainians and Russians are different peoples, with different languages and cultures, but to heap disdain on Ukraine.  Such practices are not only culturally and socially unacceptable, but only serve to assist Russia in Putin’s favourite assertion (false though it may be) that Russians and Ukrainians are “one people”.  They are not.

Towards an Authentic and Universal Valuing of Women in Uniform

From the very basics of uniform design and availability, women in uniform are disadvantaged.  Women’s uniforms almost always cost more than men’s uniforms.  Design’s are often considered and adopted by men and as with the United States’ Navy’s latest changes, women complain their input, while invited, was ignored.  As for footwear, men’s footwear has always been pointedly functional while women’s footwear still includes heels which were designed in a different age (and for a different purpose) to accentuate the female form, not provide functional footwear for people who serve in active roles.

Women in uniform need to be taken seriously.  Their sacrifices certainly have been.  Opening professional development and promotional opportunities to women not only widens the pool of candidates to ensure militaries can select all the best possible candidates but it reinforces our concept of justice and equality.