Sanction Failed to Effect Change in Cuba, Iran, Cyprus, Russia, North Korea... Nor Will They Now 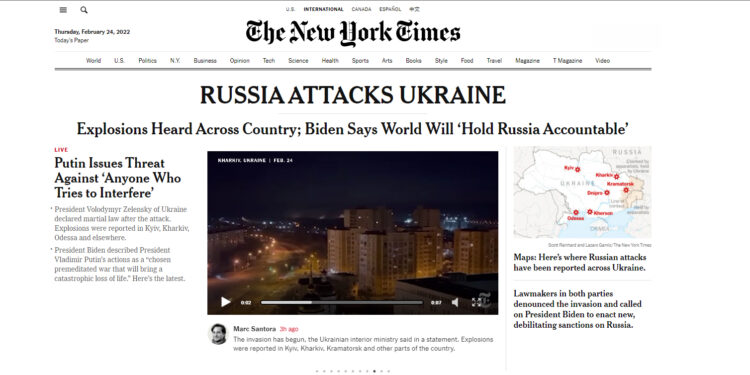 KYIV — Just after midnight, with the deafening clatter of artillery, rockets and tank fire, Russian forces began flooding across the Ukrainian frontier in the largest military invasion mounted since World War II.  Not satisfied with the partition of the country, achieved through diplomatic dishonesty, disinformation, a repudiation of all legal obligations by Charter, treaty, pledge, memorandum and undertaking, Russian Federation President Vladimir Putin ordered forces under his command to launch combat operations against those areas of Ukraine Russia did not already occupy. 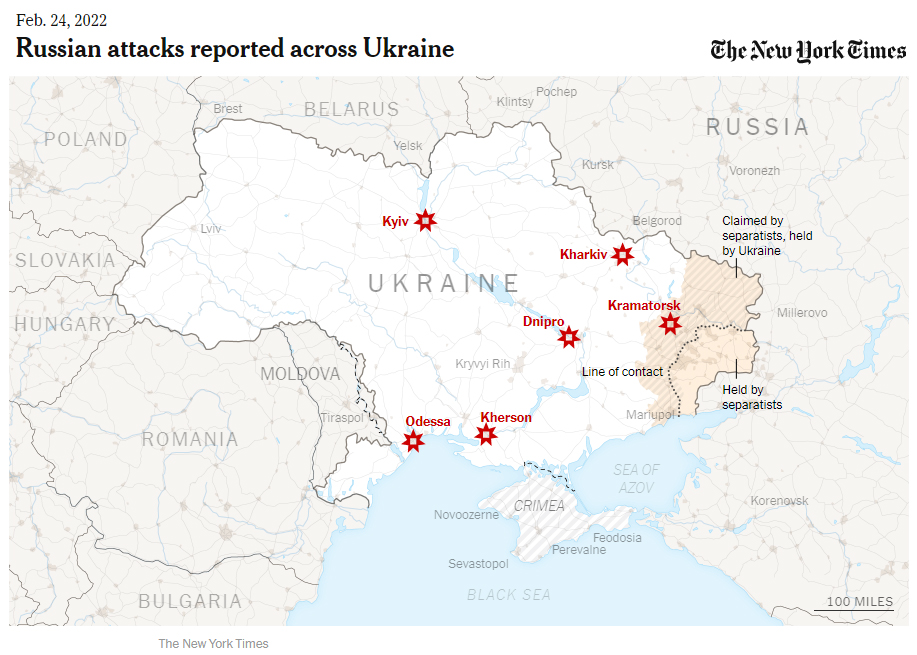 The 47 million citizens of Ukraine are now in peril.  If the 1.5 million internally displaced persons and more than 14,000 deaths that resulted from Russia’s previous invasions of Crimea, Luhansk and Donbas are an indication, Ukraine will be made to pay a high price for their independence.  Multiple, credible Western intelligence reports from several capitals indicate that Russia has constructed two extensive lists, one of people to be detained without charge under the guise of martial law and the other a summary execution list.  The ominous second list is said to contain the lists of politicians, civil society leaders, journalists and Russian dissidents who had previously fled Russia to the safety of Ukraine to avoid persecution by the Putin regime.

And here is where history is instructive.  In the year 48 B.C.E., the long-running battle between the imperious Julius Caesar and the Roman Republic reached its zenith at a place called Pharsalus, in Greece.  The Roman Senate, the lawful body governing a Rome that stretched from Germany to the Middle East and from Spain to Georgia, was lost when Pompey’s forces fell to Caesar on an unremarkable plain far from the Roman forum and Senate House.  In events of the past that reverberate in echoes today, Europe should be alarmingly concerned that its future rests not on what happens in Brussels, in the Hague or Geneva or for that matter in Dublin, Berlin or Paris, but in Kyiv, Kharkov, Dnipro, Odessa and the thousands of hamlets and villages that make up the ancient nation that is Ukraine.  Carthage was actually lost at Utica, Tunisia.  Modernity tells us that the Germany Empire ceased to exist after WWI without any real fighting on its own territory.

Today’s headline in the New York Times is telling.  The announcement of the Russian war on Ukraine is the leading banner.  President Joe Biden’s statement that the “World Will Hold Russia Accountable” may give comfort to some but only underscores the utter failure of the West to stand-up to Putin hundreds of time over the past 22-years.  History will memorialise, in long lists, just how many times the West subsidised Putin’s increasingly bellicose conduct, year-on-year.  The annals of time will undoubtedly record the litany of singularly humiliating events when Western leaders proclaimed that Putin could be trusted and dealt with as a normal Head-of-State.  Seminal moments in the West’s self-debasement of itself and betrayal of its values will be the enduring message that lingers,

And, despite harsh rhetoric by leaders that followed, from Barak Obama to Germany’s Angela Merkel and a succession of French Presidents, each will be shown to have failed to face reality by steadfastly refusing to believe Putin’s own warnings, repeated many times and many places, in many places. Putin never hid his ambitions to both humiliate the West for having caused the collapse of the Soviet Union and rebuild a new Russian empire by absorbing former Soviet Republics and Warsaw Pact countries back into his sphere of influence.  Now Western politicians will be left trying to hide from their long records of subsidising Putin’s aggressions, murders, poisonings, jailing of democracy advocates and sabotaging European security and stability.

Now, however, is not the time for recriminations on the consistent failure of the West to treat Putin as the brutal, murderous dictator he has yet again proven himself to be.  Nor is it the moment to wonder aloud or remind the world that the West steadfastly refused to treat Russia as the State sponsor of terror that is has been and continues to be today.  Alas, even wondering why the West took half-measures over the past few months that Russia would once again take as half-hearted support for Ukraine and the kind of weakness that invites the use of force, is time better spent at present.

Now is the time for unity, solidarity and determination.  The West now has a choice – because a positive agent for change or shirk-off the mantle of the past made from cloth adverse to sacrifice and clothe itself in armour prepared for defense and yes, offense when necessary.  The existential question of Ukraine is now squarely before us.  The question now remains, “What will happen to Georgia, Poland, the Baltics and the rest of Europe“?  If anyone believes Putin will be satiated by devouring Ukraine they are sorely mistaken.

The hour demands that the world finally dispense with the notion that sanctions will liberate Ukraine.  Despite sanctions regimes, some of which have endured for more than half-a-century, they have utterly failed to effect any real change in Cuba,  Cyprus,  Iran, Russia or North Korea.  The world is more dangerous today specifically because we have lulled ourselves into believing that criminal authoritarians and the regimes they lead can be dealt with as equals, even when they have repeatedly shown themselves to be unreliable and have nothing but contempt for a rules-based world order.  Even proponents of sanctions must surely admit the collective unwillingness to absorb the pain of truly crushing crushing sanctions that could produce real change has made them meaningless instruments of change and simply reduced them to punitive measures that mistakenly allow the West to feel they have met their moral obligations.

Now is not the time to send helmets or hospital beds.  Now is not the time to withhold the shipment of defensive weapons.  Now is the time for action.  If Ukraine is lost, the increasingly numerous despot countries around the globe will realise that aggression does pay and threats of half-measures are not real deterrents.  The West must confront its complicity in refusing to suffer any pain.  Ukraine’s security has been sacrificed and all of Europe put at-risk because of our unquenchable appetite for cheap energy resources.  We have forfeited our claim to moral certitude because today Europe will continue to have little choice but to continue to buy Russian energy products (at grossly inflated prices) knowing only full well they Euros paid for them will be used for Russian bullets and bombs in their attempt to erase Ukraine from the world map.  Western hypocrisy, fear and political weakness has not left Europe in a position where it has little choice but to pay for Russian energy with the knowledge its own money will be spent to undermine its very institutions and values.  Europe is now crowd-funding for its own demise.