What it Means - and What it Doesn't 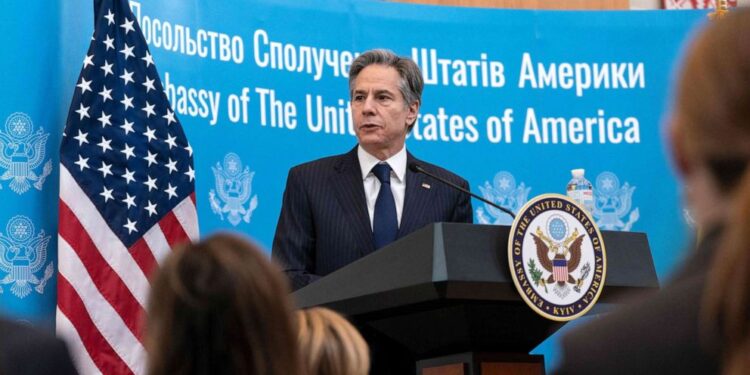 KYIV – Surely, these are times for resolve.  These are equally times for prudence.  Much speculation has been made of the United States Embassy in Kyiv requesting for permission to order non-essential personnel and family members to depart Ukraine owing to Russia’s most recent belligerence.  Sadly, most of what is being published and broadcast draws the wrong conclusion.

The Embassy in Kyiv, which was established by the Department of State shortly after Ukraine declared its independence, is one of the largest U.S. missions in Europe with approximately 900 employees.   While many of these employees are local, Ukrainian personnel serving in capacities from cleaning services to maintenance and security to administrative support the remaining staff are primarily American citizens.  Some of them are on long-term duty assignments and are in Kyiv with their families.

At the weekend, the U.S. Embassy, Kyiv, released a Travel Advisory that read as follows:

Consequently, with Level 4 travel restrictions already in place because of the Covid-19 pandemic and the threat situation growing because of the continued Russian build-up, the number of Diplomatic and Consular staff needed at the Embassy is drastically diminished.

According to former U.S. Ambassador to Ukraine, William Taylor, Chargé d’Affaires, ad interim, Kristina A. Kvien who serves as the Head of Mission in Ukraine, has been engaged in talks with the Department of State, including an ongoing assessment of the security situation in Ukraine. for the last couple of months.  This period coincides with Russia’s significant troop build-up on Ukraine’s border which threatens Ukraine’s security.  Russia has already invaded and occupied Ukrainian territory three times since 2014, in Crimea, Luhansk and Donetsk.

it is not out of the ordinary for U.S. missions around the world to change staffing levels or reduce them significantly giving the fluidity of many conflicts.  The situation in Ukraine is no different.  Additionally, the Department of State has become hyper-vigilant about protecting staff and families over the past few decades.  According to the Vienna Convention on Diplomatic Relations, the inviolability of embassies is the responsibility of host nations.  However, external factors, such as threat of invasion or civil wars, tend to reduce a host nation’s ability to guarantee embassy compound security causing all embassies (not only American) to resort to reductions in staff in-country when necessary.

The request for, and approval of the return of non-essential personnel from Kyiv must also be viewed in light of 6-seminal events in recent U.S. memory:

In the after-action review of these events, including lengthy and somewhat partisan Congressional hearings following the Embassy attack in Lybia, a series of recommendations were issued urging the Department of State to use all efforts to safeguard personnel.  Not surprisingly, Chargé d’Affaires, ad interim, Kristina A. Kvien, being well-aware of them, and reasoning the superfluous staff such as economic and cultural attaché or consular staff not needed at present due to significantly diminished travel reductions, made a prudent choice in requesting the Department of State to approve her request for the evacuation of non-essential personnel.

While it remains anyone’s guess what Putin might do concerning a possible invasion, it would be prudent for other embassies and consulates to take similarly prudent steps to ensure the safety of any and all people possible who are not essential to core mission demands at this time.

Does this mean the U.S. is certain a war will take place or is ‘turning tail‘ to avoid another debacle like the evacuation from Kabul last year?  No.  While admittedly, this consideration is undeniable,  neither Russia or any other observer should infer this to be a lack of commitment on the part of the U.S. to Ukraine’s future, security or sovereignty or a loss of confidence in the Ukrainian Government.  The U.S.  remains steadfast in its commitment to deter Putin from further bloodshed, violence and occupations and continues to not only express, but demonstrate confidence in its partners in Kyiv.

Despite pundits and keyboard warriors claiming this reduction of non-essential staff is an act of the U.S. exiting Ukraine, it would be useful to remember that both dogs and horses have 4-legs – but that doesn’t make a dog a horse.  One must draw the right conclusions based on knowledge and experience, which sadly, too few are doing at the moment.

This is, in the final analysis, simply a routine security measure taken for prudent reasons.