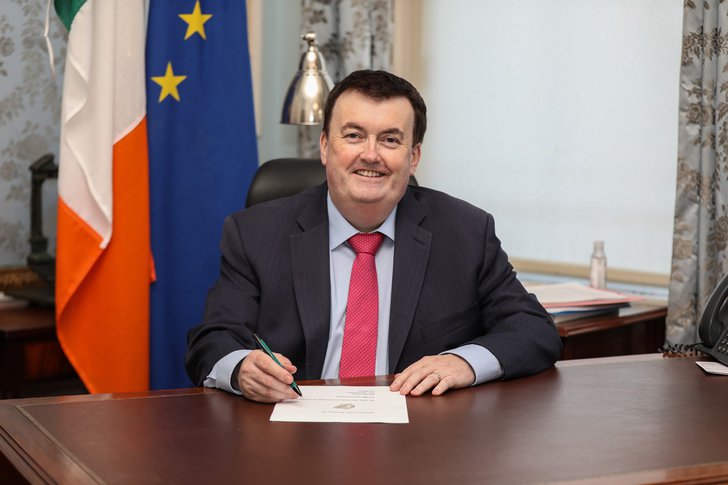 The Minister for European Affairs, Thomas Byrne T.D. focuses on enhancing the Irish connection with other EU member states – Slovenia and Austria this week.

The main topics of discussion were:

11th June 2021: The Minister for European Affairs, Thomas Byrne T.D., said “Zdravo!”  to Slovenia, and “Servus!” to Austria this week while focusing on enhancing and building the Irish connection with smaller EU states. Meeting separately with Slovenian and Austrian representatives, these discussions focused on the strong and growing connections between these countries and Ireland.

Minister Byrne met with Gašper Dovžan, Slovenian State Secretary at the Ministry of Foreign Affairs; Deputy Marko Pogačnik, President of the EU Committee of the National Assembly; and, Bojana Muršič, Head of the Parliamentary Friendship Group with Ireland. A wide range of issues were discussed including Slovenia’s upcoming presidency of the Council of the European Union, an open border on the island of Ireland, and the Conference on the Future of Europe.

Minister Byrne said: “I was honoured to speak with Slovenian representatives in the run-up to Slovenia’s upcoming presidency of the Council of the European Union. Not only is this an opportunity to learn more about Slovenia’s priorities for their presidency, it is also a demonstration of our mutual interest in reinforcing the strong and growing connections between our two countries. “

“While there is over 2,500km between our two countries, we have so much in common with Slovenia – economically, socially, and politically.  Not to mention the fact that an Irish monument stands tall in Slovenia. James Joyce spent an accidental night in Ljubljana’s railway station with his wife Nora Barnacle in 1904. In his honour, a small monument, created by the sculptor Jakov Brdar, was erected at Ljubljana railway station on Bloomsday in 2003.”

“It was great to speak with Minister Edtstadler and Secretary General  of the OSCE Helga Schmid. We had very constructive discussions on a number of issues of mutual interest such as growth, mobility and stability. I was also very pleased to speak at the Europa Wachau Forum, which was a further opportunity to share our approach to the Conference on the Future of Europe.”

In addition, Minister Byrne pointed to some examples of the deep historical connections between Austria and Ireland:

“Irish missionaries such as Saints Columbanus in Bregenz, Virgil (Fearghall) in Salzburg and Koloman (Colman) in Lower Austria played important roles in Austrian medieval history. So too did the Irish who established the Schottenstift (Irish Abbey) in 12th century Vienna. We remember, too, the contributions made from the 17th century onwards by Irish political exiles – the Wild Geese (Na Géanna Fiaine)- and their descendants. Many served with distinction at the highest levels in Austria’s military and diplomatic services and a number held high political office.”

The European Union has delivered more than half a century of peace, stability and prosperity. With the smaller EU member states working together, Minister Byrne hopes to create further opportunities for engagement and collegiality.