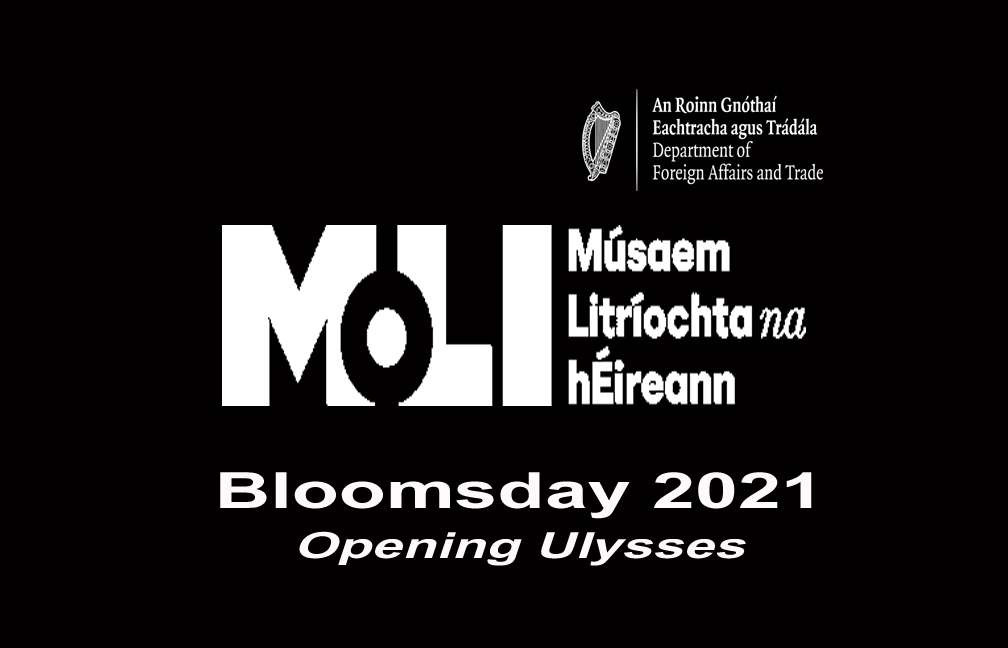 To mark Bloomsday 2021, the Department of Foreign Affairs (DFA) and the Museum of Literature Ireland (MoLI) have partnered to produce Opening Ulysses, a short film created in collaboration with 40 Irish Embassies and Consulates worldwide.  Ahead of the centenary of the novel’s publication next February, this specially commissioned film invites global audiences to engage with Ulysses through a playful, virtuosic reimagining of its opening line: Stately, plump Buck Mulligan came from the stairhead, bearing a bowl of lather on which a mirror and a razor lay crossed.

‘Building on Ireland’s innovations in digital diplomacy over the last year, our 2021 Bloomsday campaign is a global celebration of Joyce, as our diplomatic network mobilise hundreds of diverse partnerships to bring inspiring Irish literature to new audiences on six continents.’

Filming has taken place in more than 40 locations across six continents, from Alaska to Abuja, Santiago to Seoul, Canberra to Chicago.  The short film (2 min 30 sec approx) will be available to view on the DFA YouTube channel) from 1.30pm on Sunday 13 June.

As an additional initiative to reach new global audiences as part of DFA’s Bloomsday campaign, Irish Embassies and Consulates have also organised a Global Joycean Book Giveaway. Over the Bloomsday period, more than 5,000 copies of Ulysses, Dubliners and A Portrait of the Artist as a Young Man will be distributed in 100+ cities on six continents, in 18 languages ranging from Chinese, Japanese and Latvian to Hebrew, Greek and Bahasa.  To deliver this, our diplomatic network has partnered with hundreds of local organisations including national and public libraries, secondary schools, universities, development NGOs, bookshops, literary cafés, cultural centres, broadcast media and transport hubs, e.g.:

The Museum of Literature Ireland (MoLI) is also encouraging readers to join thousands of others in finally picking up Ulysses this year as part of a free online public book club. ‘Ulysses – for the rest of us!’ will run for two months from 16 June 2021, and is hosted by American podcaster Conner Habib. Sign up for free at moli.ie/Ulysses

More than 30 of Ireland’s Embassies and Consulates are also marking Bloomsday 2021 with a diverse range of physical and virtual events in collaboration with local partners. Joycean fans worldwide can enjoy a virtual exhibition from Germany, a Joyce-themed conference from Mexico, a Joycean Jam in Sydney, a Ulysses recreation in Shanghai, and many more –

check out the full range of activities at Ireland.ie/Bloomsday.

In Ireland the Bloomsday Festival, presented by the James Joyce Centre, is presenting an extensive range of programming from 11-16 June, including a Ulysses Punk Cabaret, Bloomsday Film Festival screenings, Joyce art exhibitions and drawing workshops. Find out more at bloomsdayfestival.ie.

A Short Film for Bloomsday 2021

Words from Ulysses by James Joyce

Performers (in order of location)

Austin: Katrina Gaedcke, acting major at the University of Texas

Canberra: Bridget Sayer, staff member at the Embassy of Ireland

Nairobi: Muthoni Njenga, staff member at the Embassy of Ireland

Rome: Enrico Terrinoni, Chair of English literature at the Università per Stranieri di Perugia and translator of the works of James Joyce

The Hague: Ruud Hisgen, Author, teacher and entrepreneur at the Direct Dutch Institute in The Hague

About the Museum of Literature Ireland

The Museum of Literature Ireland (MoLI) is a new landmark cultural institution in the heart of Ireland’s capital city. Picturesquely located on the southside of St Stephen’s Green in some of Dublin’s finest historic houses, MoLI’s cutting-edge exhibitions explore Ireland’s incredible literary heritage. Set amidst beautiful gardens, Dublin’s newest museum is an inspirational oasis for visitors to the city centre. The museum celebrates Ireland’s internationally renowned literary culture and heritage from the past to the present, inspiring the next generation to create, read and write. Immersive multimedia exhibitions, priceless artifacts, lectures, performances, free-to-access children’s education programmes, historic house tours, digital broadcasting, research facilities and a courtyard café set in one of the city’s most beautiful and tranquil gardens make the Museum of Literature Ireland a major contribution to the local and international literary landscape.

MoLI is a major partnership and creative alliance between University College Dublin (UCD) and the National Library of Ireland (NLI), supported by The Naughton Foundation and Fáilte Ireland.