In Conversation This Week Special Coverage of Russia's Invasion of Ukraine 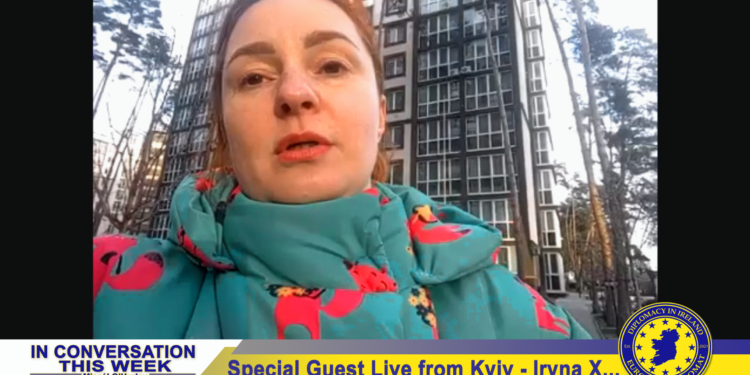 HOSTOMEL, KYIV OBLAST, UKRAINE — The airport in Hostomel (Ukrainian: Гостомель), with the longest flight line in Ukraine (the base of the world’s largest aircraft, the Antonov 225) has been the site of intense fighting for the last three days.

Russian paratroopers and Ukrainian forces have fought a fierce battle, with each occupying the airfield alternatively.  It remains uncertain in whose hands it remains at present despite Russian claims they hold the airport.

In my interview today with Iryna X. (her true name is being withheld for her own security and that of her family) she spoke LIVE on Diplomacy in Ireland – European Diplomat‘s ‘In Conversation This Week‘ about the Russian invasion, her personal experience, her family’s relocation for their safety and more.  Iryna reports that Ukrainian forces have destroyed key bridges leading into Kyiv city centre to help stop Russian invaders.

Remarkably, Iryna was the very pillar of bravery in the face of the Russian onslaught, remaining calm while explosions can be heard in the background behind her from the direction of Hostomel Airport.  The sound of continuing explosions would severely undermine Russian claims they control the airfield.

You can watch my interview with Iryna X. on our ‘In Conversation This Week with Miceal O’Hurley‘ Youtube Channel.

Ukraine’s military has put up an exceptional defense.  Despite being deprived of the necessary defensive weapons its needed to protect itself, Ukrainian women and men in uniform have taken the fight to the Russians.  Multiple, different pictures from different cities around Ukraine show Russian tanks and aircraft destroyed by Ukrainian forces.  Despite Russian denials of heavy losses, the plethora of destroyed Russian heavy tanks, armoured personnel carriers and aircraft litter have been documented on several social media platforms in real-time.  So heavy are Russia’s losses that they have cut-off Russian domestic access to the most used social media platforms as the images and information paints a much bleaker picture of Russia’s mounting losses that the Kremlin admits.

Speaking to Lieutenant Colonel (retired) Michael Hrycak, a retired American combat veteran with significant experience as an Armour Officer at the company, battalion and command levels, Russia is doing much more poorly than many might have expected.  “After only 24 hours of operations, Russia temporarily suspended offensive operations,” said Colonel Hrycak.  “There can be many reasons for this but Russia has notoriously poor logistical supports, tanks can throw a track or wear out the pads very quickly, ammunition can run-out, fuel can be expended and caring for casualties and the wounded will be necessary, there can be a loss of contact or control and many other reasons for a temporary halt,” he continued.

According to Colonel Hrycak, “The forces Russia is up against today isn’t the inexperienced, poorly led or badly equipped Ukrainian Army the fought in 2014….  Ukraine has trained its military in the most advanced ways possible, given them the best of equipment available and taught them discipline while encouraging critical leadership development.  The Verkhovna Rada (Ukrainian Parliament) formally recognised Non-Commissioned Officers (sergeants) a couple of years ago and this has ensured troops in the field can make collective decisions when possible and yet have the depth-in-leadership to seize the initiative whenever possible,” indicated Colonel Hrycak.  “The Russians aren’t taught, or encouraged, to think for themselves on the battlefield so I’m not surprised that given the training, leadership and sheer determination of the much-smaller Ukrainian military they are still racking-up an impressive record of destroying Russian tanks and aircraft….  I would bet anything the reason the Russian advanced has slowed to a crawl is due to the preparation, determination and heroism being undertaken from soldiers, to the impressively large Ukrainian reserve forces and the bravery of average civilians who are volunteering by the thousands to defend their homeland,” noted Colonel Hrycak. “Their strategic work of crippling infrastructure the Russian’s might use against them shows they are committed for the long fight… Ukrainians know it is up to them and they are showing every sign of fighting for their survival and the slowed Russian advance shows they deserve the world’s admiration and support…. Just like the Maidan Massacre in 2014, Ukrainians continue to show the extent to which they believe in European values and idea and are dying to prove it to ensure their future is in Europe and not under the thumb of the Kremlin,” Colonel Hrycak stated.

Lieutenant Colonel (retired) Michael Hrycak is a practicing lawyer in New Jersey.  He serves at the Judge Advocate of the Ukrainian American Veterans (UAV).  The UAV was founded in 1948, largely by Ukrainian immigrants that had fought against the Third Reich (Nazis) and then continued serving in the United States military during the Cold War to defend against Communism.  The UAV is the oldest, and largest Ukrainian-American veterans patriotic organisation in the United States.