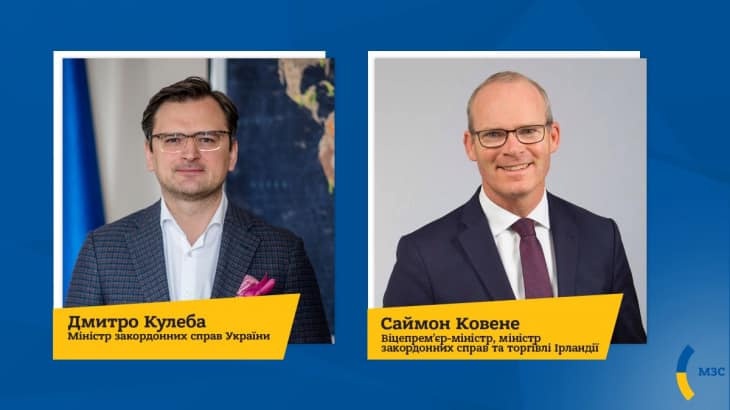 Minister Zlenko, a native of the Ukrainian capital, Kyiv, was fond of referring to Ukraine as a European nation, sharing a long border with Poland who at that time has similar historical, cultural and business histories and sharing the neighbouring Romania, Hungary and the then Czechoslovakia which also shared ethnic affinities, histories, culture and “economic ties, trade, mixed marriages, the common Danube waters….”  Twenty-nine years later Ukraine has firmly embraced its place in Europe and enjoys Visa-Free Travel within the Schengen Area and is a robust participant in the Eastern Alliance.

Today, the Ministry of Foreign Affairs posted a message on Instagram in which the MFA noted, “This year we will mark another milestone with the opening of Embassy Kyiv, further strengthening ties between our countries #GlobalIreland.”  At present, Ireland maintains a Consulate in Kyiv located at Khreschatyk Street, 32Б, Kyiv, Ukraine.

Last year, Minister for Foreign Affairs of Ukraine, Mr. Dmytro Kuleba had a telephone conversation with the then Tánaiste and Minister for Foreign Affairs and Trade, Mr. Simon Coveney.  The Foreign Ministers paid special emphasis on the Ukraine-Ireland bilateral cooperation. In particular, Simon Coveney has confirmed intention to establish the Irish Embassy to Ukraine before the end of 2020.  Delays have occured owing to the Covid-19 pandemic, however, both Ireland and Ukraine have maintained their commitment to see the Irish Embassy in Kyiv opened as quickly as possible.

An Irish Embassy in Kyiv is yet another sign of the mutual closeness that has developed between Dublin and Kyiv over the past 29 years.  At the time of last year’s call announcing the Embassy, Ukrainian Minister Mr. Dmytro Kuleba noted: “The establishment of the Irish Embassy in Kyiv is an important landmark in our relations.  We are also awaiting the Irish business mission to come to Ukraine before the end of this year.  There is a need to promptly develop a high-quality trade and encourage foreign investments in Ukraine”.  Mr. Kuleba also pointed to a consistent support by Ireland of the sovereignty and territorial integrity of Ukraine, including within the framework of international organizations.

The Ukrainian Embassy in Ireland is headed by Charge d’Affaires ad interim Ms. Olena Shaloput.  The Ambassador of Ireland to Ukraine who will establish the first Irish Embassy in Kyiv has yet to be announced.