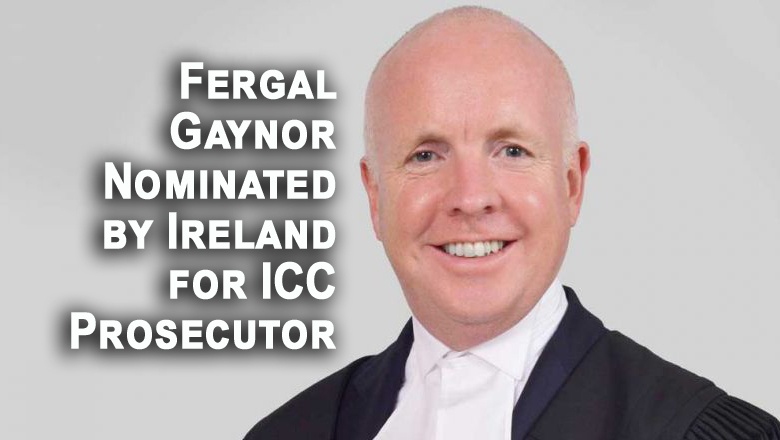 The Hague — Ireland has nominated Judge Fergal Gaynor for election as the next Prosecutor of the International Criminal Court (ICC).  Ireland is a committed supporter of the ICC, which is a central element of the framework for international criminal justice and accountability.

Speaking about the nomination, the Minister for Foreign Affairs, Simon Coveney T.D., said, “I am very pleased to nominate Judge Fergal Gaynor for election as the next ICC Prosecutor. The ICC needs a strong, experienced and effective Prosecutor who will exercise sound judgment and lead the ICC in the coming years. Judge Gaynor combines experience of civil and common law systems, strong management skills and an independent and principled vision for this vital role. I believe he will make an excellent Prosecutor.”

Gaynor, born to Irish parents then teaching in Malawi, was raised in Westmeath.  He studied law at Trinity College (Dublin) and Cambridge.  Since 2001, Gaynor has specialised in international criminal justice.  Prior to his nomination by Ireland, Gaynor served on prosecution teams pursuing leading members of the Bosnian Serb leadership, the Khmer Rouge and the Interim Government of Rwanda.  In 2020, he was one of six new judges appointed to a special court in the Hague to hear matters relating to crimes committed during the war in Kosovo.

Election of the Prosecutor

The Prosecutor of the ICC is an instrumental officer of the Court, heading the Office of the Prosecutor, which is responsible for investigating and prosecuting individuals for alleged genocide, crimes against humanity and war crimes in circumstances where States are unwilling or unable to hold the perpetrators accountable.  The election for the ICC Prosecutor is expected to take place at the upcoming, New York hosted, Second Resumed Session of the 19th Assembly of States Party to the Rome Statute.  There are 123 States eligible to vote in the election.  The Prosecutor is elected by an absolute majority of votes which are cast by secret ballots.

Currently, there are three nominated candidates for election as ICC Prosecutor, Judge Fergal Gaynor (nominated by Ireland); Mr. Karim Khan, Q.C. (Nominated by the United Kingdom); and, Mr. Carlos Castresana Fernández (Nominated by Spain).  Nominations by State Parties to the Rome Statute are eligible to nominate further candidates up to Wednesday, 10 February at 5:00 p.m. (GMT).

The term of the current Prosecutor, Ms Fatou Bensouda, ends in June 2021.  Ms. Bensouda has been widely praised for reinvigorrating the ICC with aggressive but measured high level investigations and prosecutions.  Noted for being cautious, Bensouda sometimes sought clearance from the ICC before pursuing investigations or prosecutions where novel issues of law or jurisdiction were concerned, almost always prevailing.  Her stewardship over the Office of the Prosecutor at the ICC has been widely hailed by legal scholars and human rights advocates alike, often to the frustration of responsible parties who strenuously objected or previously considered themselves beyond the reach of the ICC.

Israel-Palestine
The ICC announced that it has jurisdiction in Palestine, clearing its chief Prosecutor to investigate alleged atrocities despite fierce Israeli objections.  Israel’s prime minister, Benjamin Netanyahu, lashed out at the ruling and made clear Israel would act to “protect our citizens and soldiers in every way from legal persecution”.  Bensouda had earlier announced her intention to open a formal inquiry into alleged war crimes in the occupied West Bank, East Jerusalem and the Gaza Strip.  Owing to Palestine’s status as an ‘Occupied Territory’ rather than a ‘Sovereign Country’ Ms. Bensouda delayed action until the ICC, sitting at the Hague, affirmed the ICC had authority to act in Palestine.  The decision came on the heels of Palestinian Authority using its UN Observer Status (gained in 2012) to join the ICC and therefore ground its call for an investigation into Israeli actions.  The ICC has made clear it will also investigate conduct of the Gaza-based Hamas organisation.

The investigation is expected to enquire into conduct following the 2014 war between Israel and Hamas. The ICC has indicated it is particularly concerned over the alleged extrajudicial killings of more than 200 Palestinians, including more than 40 children were allegedly killed by Israeli occupation forces.  In a landmark argument, Bensouda stated there was a ‘reasonable basis‘ to believe that Israel had committed war crimes by resettling Israelis into the West Bank.  The Fourth Geneva Convention, to which Israel is a signatory, prohibits the resettlement or transfer of civilians into occupied lands.  Under numerous Resolutions, most notably in 1979 and 1980, the UN, employing international law, concluded Israel is an occupying power violating international law by resettling Israelis into the West Bank, East Jerusalem and the Golan Heights, which are deemed to be Palestinian Territories.  UN Security Council Resolution 446 specifically cited Israel’s violation of the 4th Geneva Convention to call upon Israel to cease resettlement of Israelis into the occupied territories.  Israel refutes that the Fourth Geneva Convention gives de jour jurisdiction over the Palestinian Occupied Territories and do not apply to their settlements..

In December 2020, Bensouda made further headlines by announcing the ICC had concluded its investigation into war crimes allegedly committed by Russia in Crimea and Eastern Ukraine following the 2014 attempted annexation of Crimea by Russia and the outbreak of hostilities in Eastern Ukraine.  Russia had effectively ended its cooperation with the ICC following a damning report in 2016.  Russia, while a signatory, has steadfastly refused to ratify the Rome Statute.  However, the ICC concluded it has authority over Russian citizens who may have committed certain crimes on Ukrainian territory based upon Ukraine’s accepting the ad hoc jurisdiction of the ICC.  Following Ukraine’s complaint, initiated in 2015, based upon hostilities following the 2014 Maidan events, the ICC took up the matter.  As with the ICC’s reasoning In RE: Israel, the ICC determined that Crimea, which is recognised as Ukrainian sovereign territory, is considered occupied territory under international humanitarian law (IHL) and Russia’s militarily was additionally involved in the conflict in eastern Ukraine (paras 158, 169-170), which brings Russian Federation citizen’s conduct under the purview of the ICC.  Russia’s position that they have failed to ratify the Rome Statute and have withdrawn their signature from it does not, in law, preclude them from ICC jurisdiction.

Beyond complaints of extrajudicial killings of Ukrainians, many of them ethnic Tatar minorities, and numerous abuses of human rights and war crimes, Russia is considered to have illegally resettled at least 140,000 Russian into Ukraine’s Crimea since 2014.  As access to Crimea is severely restricted, there is no way of verifying the number of Russians resettled in Crimea, but human rights organisations claim the figure to be more than 250,000 Russians resettled illegally in Crimea.  Moreover, Ukrainian citizens, including the indigenous Tatars, complain of being forced to leave their homeland under Russian occupation and forcibly settled with Russian citizenship against their will.

The ICC has also vigourously pursued investigations into the conduct of the United States and its citizens during its more-than-a-decade-long war in Afghanistan.  Despite the US not being a signatory to the Rome Statute, the ICC accepted jurisdiction only to see President Donald Trump order Bensouda barred from entering the United States as part of sanctions designed to intimidate the ICC.

A March 2020 ruling by the Appeals Chamber of the ICC sitting at The Hague announced the ICC could proceed with its investigation into war crimes allegedly committed by the United States and its citizens.  This groundbreaking decision may, for the first time, see US citizens appear as defendants before the ICC, a step that alarms the US.  While the Biden Administration generally rejects the unilateralism and isolationism that marked the Trump era it continues to remain aloof of submission to ICC jurisdiction.

Bensouda previously announced the ICC had gathered enough information to prove that US forces had “committed acts of torture, cruel treatment, outrages upon personal dignity, rape and sexual violence” in Afghanistan between 2003-2004.  Moreover, she has asserted that the US allegedly extended their sphere of illegal conduct by operating covert CIA facilities in Poland, Romania and Lithuania where the US stands accused of employing torture and numerous other human rights abuses in what the US euphemistically called ‘extraordinary rendition‘.

The ICC is additionally looking into war crimes allegedly committed by the Taliban.