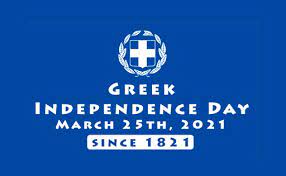 Dublin – We extend our best wishes today to the Greek people on the occasion of The Hellenic Republic’s National Day.

Greek Independence Day is celebrated annually on 25 March to mark the start of the War of Greek Independence.  The day is auspicious in that it coincides with the Greek Orthodox Church’s celebration of the Feast of the Annuncation to the Theotokos (Mary, Mother of God) when the Archangel Gabriel appeared to Mary announcing that she would bear the Christ child, the Son of God.  200 years ago, Greek patriots chose 25 March to commence their struggle for the liberation of Greece from Ottoman domination.

Independence for the Hellenic Republic in Modernity

Greece, like many nations, experienced a long struggle prior to achieving independence.  As with Ireland’s 1798 (United Irishmen) Rising, Greek patriots formed a secret society, Φιλική Εταιρεία (Filiki Eteria), to fight for Greece’s liberation.  In 1821, betrayed by informers to Ottoman authorities, the planned, simultaneous risings in the Peloponnese, the Danubian Principalities, and Constantinople itself, was forced to being before its planned 25 March date.  Bishop Germanos of Patras initiated the revolution by hoisting a flag at the Monastery of Agia Lavra in the Peloponnese.   By September, Greek forces had won several victories from Macedonia to Crete.

After major setbacks in 1825-1826 a makeshift ‘fleet’ of Greek vessels won a resounding sea victory against a vastly superior Ottoman Navy flotilla in the Aegean Sea.  Realising the Greek people had a real opportunity to gain independence, and consistent with the age of revolutions across Europe, the ‘Three Great Powers’, Russia, France and Britain weighed in on the side of Greek Independence.

Russia invaded the Ottoman Empire and forced it to accept Greek autonomy in the Treaty of Adrianople (1829).  Greece was finally recognized as an independent State under the London Protocol (1830).  In 1832, the London Conference and subsequent Treaty of Constantinople fixed the territorial boundaries of an independent Greece.  On 27 May 1832, the Kingdom of Greece was established with Prince Otto of Bavaria, aged only 17, installed as the first (modern) King of Greece.  He was later deposed when the Greek National Assembly elected Prince William of Denmark, himself aged only 17, King of the Hellenes, under the regnal name, George I.

A 200th anniversary cultural project, ‘1821 Before and After,’ celebrating the Greek War of Independence bicentennia,l has been organised by the Benaki Museum in partnership with the Bank of Greece, the National Bank of Greece and Alpha Bank.  Some 1,200 objects will be presented for a period of eight months (3 March – 7 November 2021) in an exhibition space of over 2,500 square metres at the Benaki Museum, Athens.  The exhibit can be experienced online through a panorama of a whole century of Greek history (1770-1870) guided by the exhibition team and enjoy rare moments of the preparation. (Greek, with English subtitles)

From the Áras an Uachtaráin, President Michael D. Higgins conveyed greetings to President Katerina Sakellaropoulou on the occasion of Greece’s National Day.  President Higgins has been a key advocate of promoting Irish-Hellenic bilateral relations, visiting Greece in 2018 and again in 2019.  During his 2018 visit to Athens, where President Higgins was presented an Doctorate (Honoris Causa) from the ancient University of Athens Department of English Language and Literature School of Philosophy, his lecture,‘Of Greece and Ireland – an ancient and enduring relationship full of new possibilities’ was warmly received throughout the Hellenic Republic and throughout Europe.

Greece & Ireland at a Glance

The relationship between Ireland and Greece is ancient.  The Celtic people were known to ancient Greeks and the works of classical Greek civilisation have been known in Ireland for many centuries.  The giants of Irish literature: Oscar Wilde, W.B. Yeats, James Joyce, Samuel Beckett and others, were all deeply influenced by Greek culture.  In the modern era, Ireland has enjoyed close fraternal relations in a broad range of fields, including politics, economics, trade, culture, philosophy and academia.  Over the last number of years the relationship has both deepened and intensified  as Ireland and the Hellenic Republic work together to move Europe forward, particularly during our common membership of the trio Presidency of the Council of the European Union in 2013/14.

Greece and Ireland maintain traditionally friendly relations.  There is potential for further development of political relations, given that the two countries’ positions converge on a large number of issues and they share common values. Both countries are members of the EU, the UN and the OSCE, and they both participate in the eurozone.   The Greek Community of Ireland – based in Dublin – is the main association of the Greek Irish community, which is estimated to be 800 strong. The Irish-Hellenic Association – active for 40 years now – regularly organizes Greek cultural events.  In Ireland, Ancient Greek language and culture are taught in the Classical Studies Departments of tertiary education. There are Modern Greek departments at Trinity College and University College, Dublin.

Greece’s chief diplomat in Dublin is Her Excellency Μs. Ekaterini Simopoulou, Ambassador Extraordinary and Plenipotentiary of the Hellenic Republic to Ireland.  Resident since 2019, Ambassador Simopoulou has had a distinguished career, representing Greece in postings from South Africa to Jordan, Spain to the UN Agencies Vienna, United Kingdom, Portugal and now Ireland.  She is the recipient of several honours including the Isabela la Catolica (Spain 2000); the Grand Cross of the Order of Prince Henry (Portugal 20180; and the Grand Cross of the Older of the Merit (Portugal 2019).

__________________________
This article was based on independent research and information made available by the Department of Foreign Affairs and the Embassy of the Hellenic Republic, Dublin.