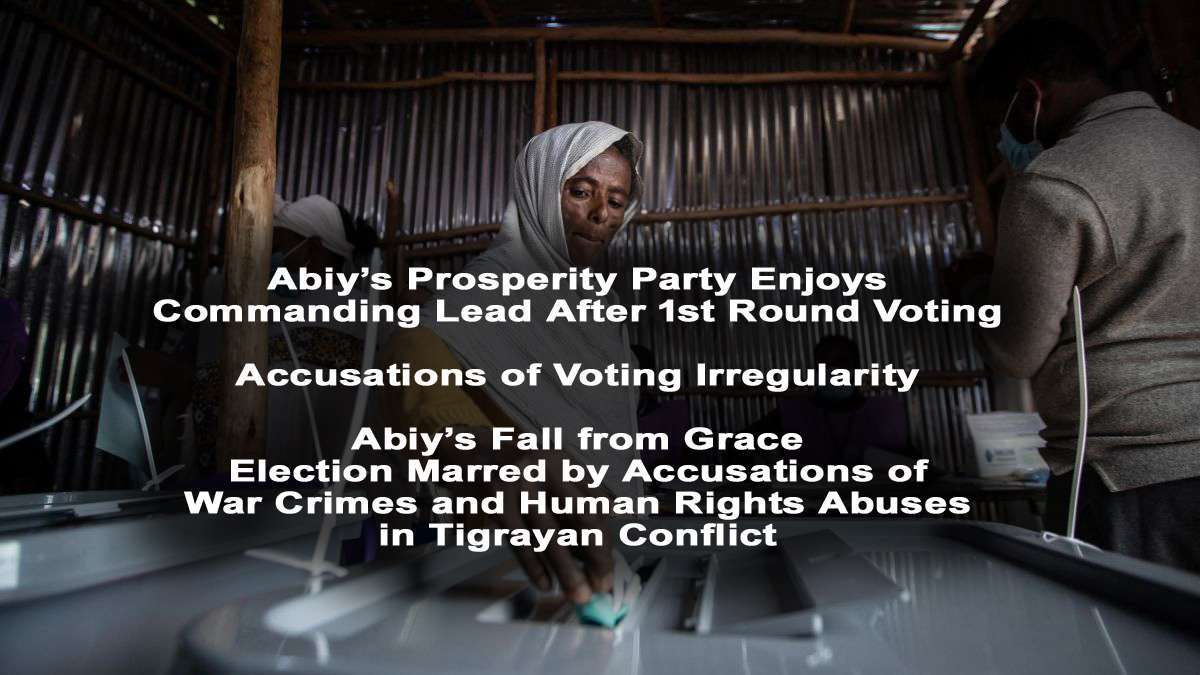 ADDIS ABABA – Under what the European Union described as “problematic conditions” and the United States expressed they were “gravely concerned about the environment” in which the election occurred, Ethiopia’s Nobel Peace Prize winning Prime Minister, Abiy Ahmed, was swept back into power when his ruling Prosperity Party (PP) took more than 410 of the 546 parliamentary seats.  This was Ethiopia’s sixth ever national election.  Abiy is the first of the Oromo people to lead Ethiopia.

Abiy, who took office in 2018 after his predecessor, Hailemariam Desalegn Boshe, resigned.  Hailemariam, who had previously served as Foreign Minister before taking on the duties of Chairman of the African Union, led a troubled administration.  He resigned in February 2018 owing to widespread unrest and protests across the country.  Hailemariam held the distinction of being the first ruler of Ethiopia in modernity to step down from office.  His predecessors were overthrown.   Since 1909, there have been 3 chief ministers and 11 Prime Ministers and one was both Chief Minister and Prime Minister, making a total of 15 persons being or having been head of government.  After the 1960 coup d’ètat, two rivals claimed to serve as Prime Minister, one elected and the other appointed by the leaders of the coup.

The second round of voting, which is scheduled for 6 September, will take place for those who could not vote in conflict impacted areas.  Election observers and rights advocates have already announced their significant concerns with voting irregularities in the first round of voting that took place yesterday, undermining confidence in the election results reported.

Ruling Despite Self-Inflicted Fall from Grace

Abiy won the Nobel Peace Prize in 2019, largely for his work in resolving a violent border dispute with neighbouring Eritrea which borders the northern Ethiopian province of Tigray.  In November 2020, Abiy launched a military incursion into Tigray following months of Tigrayan leaders asserting their independence from Addis Ababa and holding elections not sanctioned by the Abiy government.

Despite his prestige, Abiy’s rule as Prime Minister over the last 3-years has not been without significant criticism.  Although he received high marks for uniting the disparate parties to form a stable government following Hailemariam’s resignation due to unrest, Abiy delayed elections twice, alarming opponents amongst what appeared to be significant authoritarianism.  That reputation was amplified after Abiy ordered what would arguably have been a legitimate military exercise to maintain Ethiopia’s integrity by suppressing an uprising in Tigray that quickly turned into a tactical disaster.

Tigrayan rebels resisted with force with the result that after almost 9-months of wielding the combined strength of the Ethiopian State’s military and police forces, assisted by Eritrean military forces, Tigrayan forces pushed Ethiopia’s troops from their capital of Mekelle in a humiliating defeat followed by the wide scale retreat of Government forces.  Today, Mekelle is firmly under Tigrayan control.

Rampant Human Rights Abuses and Accusations of War Crimes – Humanitarian Crisis
What marks this conflict as most disturbing is the documentation of some of the most brutal war crimes and human rights abuses in modern history.  Ethiopian government forces used mobile phones to record their extrajudicial killing of countless civilians.  These videos have appeared on international news networks with a shocking regularity and are not limited to a single or limited number of incidents.  Equally disturbing are the accusations that the Eritrean troops that allied with the Ethiopian government forces are also accused of brutality.  Abiy, whom laid a claim to peace, justice and equality at the beginning of his tenure has fettered away that mantel and now stands as yet another Ethiopian Prime Minister whose tenure will be forever tarnished.

While there have been no personal accusations against Abiy, as Prime Minister, he is the chief executive of the government which bears responsibility for the conduct of its troops.  But where Abiy is undeniably responsible is having been obdurate in refusing to open aid corridors to alleviate the human suffering that accompanies all military conflicts.  From the European Union to the United Nations and even Ethiopia’s long-time booster, the United States, universal condemnation has been voiced for the suffering of millions of Ethiopians, including Tigrayans, many of whom have had to flee to neighbouring countries creating a refugee crisis in the already beleaguered African Horn.