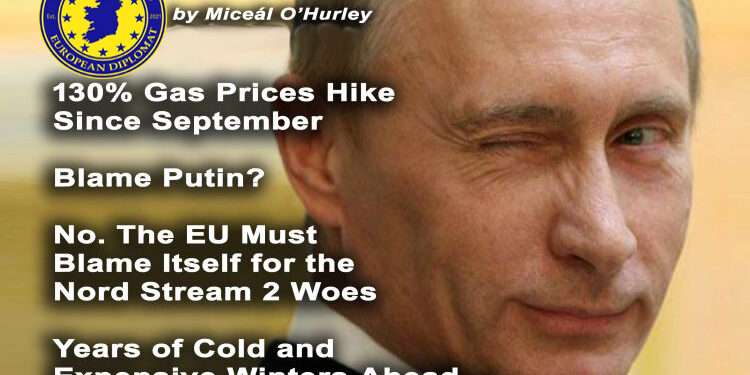 MOSCOW – Going against European Union policy, Germany pushed for the completion of the highly controversial Nord Stream 2 pipeline.  The gas pipeline was completed last month despite abundant warning by European partners, the United States and Ukraine that it would concentrate European energy security in the hands of one person – Russia’s Vladamir Putin.

Nord Stream 2 has now been completed after US President Joe Biden removed the threat of continued US sanctions in his bid to regain favour in Berlin and received assurances from Germany that Russia would not seek to further punish Ukraine.  The pipeline has yet to obtain final regulatory certification that would allow it to begin operating.  Nord Stream 2 is a high-capacity gas pipeline that connect Russia to Germany through a largely Baltic Sea route.  German regulators must provide final certification before the pipeline can begin to operate.

Russia’s Deputy Prime Minister, Alexander Novak, spoke on Wednesday, 6 October, pushing for the “… early completion of the certification [for Nord Stream 2]” on the basis that it would “cool of the current situation.”  The current situation, the disproportionately high cost and low demand of gas throughout Europe, is an entirely artificial construct of Russia designed to threaten European businesses and homes with energy poverty as the continent fast approaches what forecasts project to be some of the most severe winter weather patterns in decades.

Of course Germany and Russia argue that the additional capacity provided by the Nord Stream 2 pipeline is essential to Europe’s energy demands and security.  This view wholly disregards that current capacity exists through various pipelines, most notably those running through Ukraine, against whom Russia is waging a brutal war and illegal occupation of parts of Eastern Ukraine and Crimea.  Moreover, capacity is not the issue, nor has it been.  The issue is Russia’s desire to both deprive Ukraine of money by bypassing its pipelines (another component of Russia’s hybrid warfare in which now all of Europe will actively participate by assisting Russia in starving Ukraine of gas transit revenues) but more to the point, if Putin refuses to use the capacity of Nord Stream 2, as he now does with other pipelines, the issue is one of Russia manipulating prices by withholding supply.

That Russia is now in a position to refuse to “cool the current situation” when it has the gas reserves, production capacity and alternative pipelines at their disposal to reduce prices and assure European energy security demonstrates quite clearly the fears of opponents of Nord Stream 2 are now realised.  Having capitulated to Germany and Russia’s demands for the pipeline to be constructed, Europe’s warmth and economic stability rests in the hands of a single man who wields almost absolute power over Europe’s gas supply – Putin.

Germany has been allowed to dictate energy policy by fiat for the entirety of the EU by demanding the opening of the Nord Stream 2 pipeline.  Germany’s energy thirst is great, but largely one of its own making by ending nuclear energy production and dragging its heels on key carbon-neutral energy reduction practices.  In a European Union of ‘equals’ in at least the field of energy policy, Germany has proven itself to be ‘more equal than others.’

By acquiescing to Germany’s demands Europe has voluntarily placed itself at Russia’s mercy and control while entrusting its economic stability to a Russian ‘good will’ that evidence proves does not exist.  Alarmingly, Europe is now actively rewarding Russia with increased gas profitability for its brazen-banditry of artificially driving-up gas prices at whim while simultaneously inflicting another blow to Ukraine which continues to struggle to keep Russia from encroaching on its internationally recognised borders.  If there were any policies more contrary to foundational and stated European values and covenants I have yet to see them.

Increased Russian breaches of the cease fire agreement brokered by the European Union continue to claim the lives of Ukrainian civilians and defenders.  The unexploded landmines, ordinance, booby-traps and more will continue to claim Ukrainian lives into the future, long after combat operations cease.  Europe knows this as evidenced by its many sanctions levied and sustained against Russia for its enduring bad conduct.  All this makes the decision to reward Russia and concomitantly placing European energy security in the hands of Putin all the more unconscionable and unreasoned.

While Nord Stream 2 could play a role in reducing gas prices the underlying issue is Putin’s willingness to unilaterally withhold gas supplies to punish Europe all while profiting handsomely by the same act.  The building of Nord Stream 2, 3, 4 or 5 would not begin to address Russia’s unbridled willingness to toy with Europe’s energy security, economic stability and the misery it will cause the average European who will be forced to choose between heat and food, prescription drugs, medical care and basic family needs.  Europe, by Germany’s fiat, is now as firmly under Putin’s control as if we were members of the Russian Federation.  It was foreseeable and yet it was allowed to happen.  There is no quick or painless remedy to this debacle.

According to the Independent Commodity Intelligence Services (ICIS) the spike in prices caused by Russia manipulating gas supplies to Europe is more than 8-times higher than at the same point last year.  This is despite Russia claiming increased production and coming on the heels of reduced-demand and increased-reserves owing to the Covid-19 pandemic.

In a statement as lacking in credibility as much as it displays a failure to forecast the unintended consequences of bad policy decisions, the EU’s Energy Chief, Kadri Simpson, unpersuasively claimed, “This price shock is an unexpected crisis at a critical juncture.”  Given that Russia planned the crisis, put it in action, has shown itself to be both an unreliable and aggressive ‘partner’ and the EU (with the exception of Germany) collectively opposed Nord Stream 2 completion and that both the US and Ukraine warned specifically this would happen, Simpson’s claim that it was “unexpected” is a preposterous indictment of the EU’s failures in this regard and disregards the years of warning which connotes willful ignorance on the part of EU energy policy-makers.

Simpson further gave rise to the humiliation Europe now suffers by claiming, “The immediate priority should be to mitigate social impacts and protect vulnerable households.”  In toto, the EU is now forced to subsidise the cost of energy for the most “vulnerable households” while the vast majority of European households and businesses will continuing paying artificially inflated prices all while re-affirming the hold Putin and his Russia have over Europe while lining their pockets with higher revenues.  Europe is now paying what is tantamount to extortion money to Russia because Russia is not satisfied with the disproportionate hold it already has over European access to energy and demands more, now.

After Wednesday’s public relations offensive by Russia gas prices dropped slightly after Putin spoke to the media.  Here, parsing his statement is incredibly important.  Putin “hinted” that Russia “could” increase its output, saying that Russia’s State-owned Gazprom corporation has never “refused to increase supplies to its consumers if they submit appropriate bids.”  In other words, Europe is being asked to rely on “hints”, which “could” result in increased Russian supply, but only if we agree to “appropriate bids.”  As if ripped from the script of the Godfather with all the gravitas of an implied threat by Don Corleone, all this is plain speak for us trusting Russia in the future to not do what they have demonstrated they are willing to do in the past and at present, and only if we pay the price they feel is “appropriate.”  Putin is essentially claiming he will make Europe, “an offer they can’t refuse.”

Owing to policy failure and allowing one State, Germany, to set European energy security policy, Europe depends on Russian gas and now must pay their extortionate rates or “sleep with the fishes.”

The wily Kremlin spokesperson, Dmitry Peskov, told reporters Wednesday that possible increased export supply, “…depends on requests, on contractual obligations and commercial agreements.”  As any lawyer will tell you, contracts mean nothing when the person with whom you deal has a continuing and pervasive history of breaches of law and avoiding responsibility.

It is high time for Europe to take notice that Russia is not a law-abiding partner, as evidenced by its invasion and occupations of parts of Georgia, Moldova and Ukraine, its constant State-sponsored hacking of other States, its breaches of maritime law and refusal to be guided by the International Tribunal on the Law of the Seas (ITLOS), the findings of the European Court of Human Rights Grand Chamber that it was the State sponsor of the murder of Aleksandr Litvinenko, it poisoned Sergei and Yulia Skripal on EU territory and caused the death of Dawn Sturgess, murdered an asylum seeker in the German park in broad daylight, imprisoned Alexis Navalny and other dissenters and protestors, shot-down the civilian airliner MH-17 over Ukraine killing all aboard…  Russia is obdurate in its refusal to be guided by the rule of law or international norms.  Still, Peskov and Putin ask us to trust them and sadly, too many politicians and policy-makers in Europe do.

This winter and for years to come every European household and business will pay the price, feel the chill of winter and be poorer for the experience all while Putin and Russia are enriched because Europe voluntarily decided to make itself precariously vulnerable to their extortion.