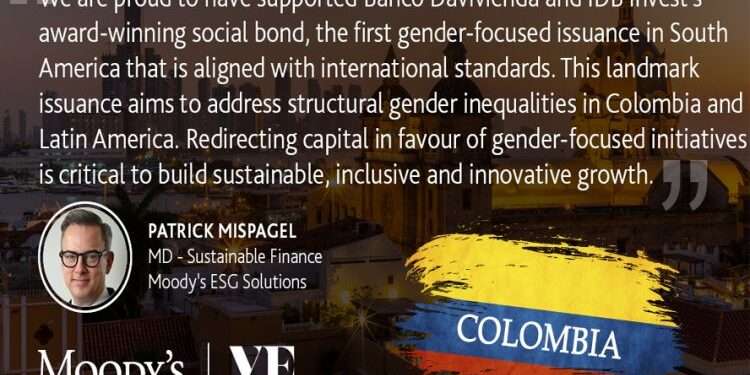 Bogotá – In August, Colombia took another giant leap forward in promoting gender equality and female empowerment, continuing to demonstrate its continued leadership in the region and the Americas.  Colombia issued the first gender-focused social bond in Latin America aligned with international standards.  The bond issue marks Colombia as the first country in the region to both structure and place this kind of financial instrument in the market as recognised by UN Women.  The bond issue is expected to contribute to no less than six of the United Nations Sustainable Development Goals (UN SDGs).

Proceeds from the bond placement will be used to finance the growth of female-led SMEs, as well as the purchase of social interest houses by women.  Similar bond issues were launched in Australia and Canada.  Although few in number, these ‘gender lens investment’ vehicles have proven powerful and financially rewarding for investors as well as the goals of the bonds – to empower women.  Colombia’s entry into gender focused investments are aimed at closing the critical gaps in women’s access to the labor market and to positions of leadership or funding.

The bonds are a new, socially conscious, fixed income financial product.  They are subject to the same financial and capital markets regulation as traditional bonds.  By creating a funding mechanism to lift women out of poverty, provide them the same access to capital as men have traditionally been able to access and create opportunities the financial market fulfils its goal of responsible investment and social development.

The issuance of these social bonds with a gender lens focus were offered for a term of seven years, in the amount of COL$362,500m Colombian pesos (equivalent of $100m US dollars).

On 30th August, the Government of Colombia launched a pioneering tool to facilitate project funding through productivity bonuses for the promotion of female empowerment in the Colombian regions.  The first project, which will be made effective in the Huila Department, with an investment of approximately €970,000 will immediately benefit more than 500 women in the region.  The knock-on benefit of these investments is expected to add further jobs in the region which will also benefit women.

According to Colombia’s Equality Presidential Counsellor, Gheidy Gallo Santos, the productivity bonuses system will provide territorial authorities the resources and means “to make of Colombia a nation of entrepreneur women.”  Colombia’s decision to empower territorial authorities to implement the productivity bonus strategy corresponds to international ‘best practices’ where geography, dialect, customs and traditions often have significant impact on entrepreneurial development which is not often considered by centralised national governments or international institutions.  Regional administration lends itself to greater accountability driven by local data collection and assessment.

The rise of thematic bonds, designed to produce mutually beneficial social and financial profitability are exploding on the world market.  The trend arose following the ‘Green Bonds’ issues linked to the 2015 Paris Climate Agreement in support of the 2030 SDGs.  The bonds were the capital market’s response to empower entrepreneurs to adapt and implement measurable actions to stem the cause and effects of climate change.

Within 18 months of the Paris Climate Agreement, Bancóldex (the Colombian Business Development Bank) issued its first green bond in the local market.  The ‘Green Bond’ issue was offered at COL$200b Colombian Pesos and financed projects that would help measurably reduce the negative consequences of climate change while providing a positive return for investors.

The success of the 2017 ‘Green Bond’ issue led Bancóldex to issue another thematic bond in 2018, geared towards “projects related to the generation and formalisation of employment, the reduction of inequalities, the activation of rural economies, access to credit, the reduction of the wage gap between men and women and the integration of excluded groups within the productive economy.”  The 2018 bond offering was targeted for the local market with a COL$ 400,000m Colombian pesos issue.  That bond issue was supported with technical assistance from the Inter-American Development Bank made possible by financial assistance from the Swiss Embassy in Colombia – Economic Cooperation and Development (SECO).

Timed for Maximum Effect
Colombia’s bond issue to empower women comes at a critical time when the world economy is struggling to maintain jobs and drive new job creation in the aftermath of the Covid-19 impact on the world economy.