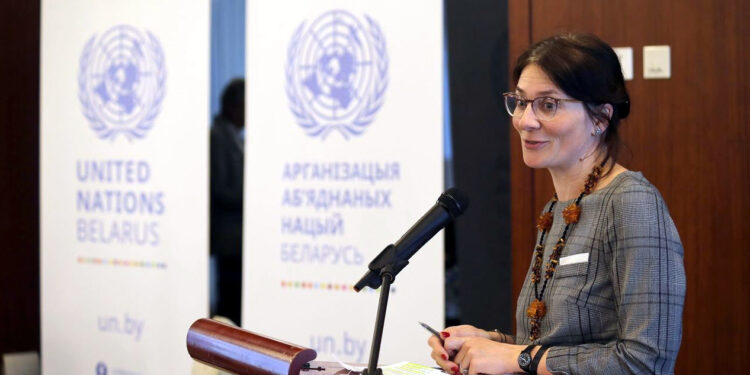 MINSK — Kremlin vassal Alexander Lukashenka’s Belarus Regime has caught the ire of the European Union following what is by all accounts an unwarranted detention by Belarusian police of an EU diplomat.  On 6 September 2022, the EU chargé d’affaires to Belarus, Evelina Shultz, attended a public hearing in which 10 political prisoners of the Lukashenka regime were handed-down unusually long sentences, even by Belarusian standards.  All stood accused of crimes for engaging in pro-democracy activity as civil society actors.

Returning to her office, Shultz was arrested by Belarusian police and held for more than 2-and-a-half hours the the Frunze District Police Department in Minsk.  The Vienna Convention on Diplomatic Relations, 1961 guarantees the safety and freedom to function of diplomats making them free from “any form of arrest or detention….”:

Radio Svaboda reported the head of the EU delegation, Dirk Schuebel, who was asked to depart Belarus in 2021 at the request of the Lukashenka regime, was notified of the incident. 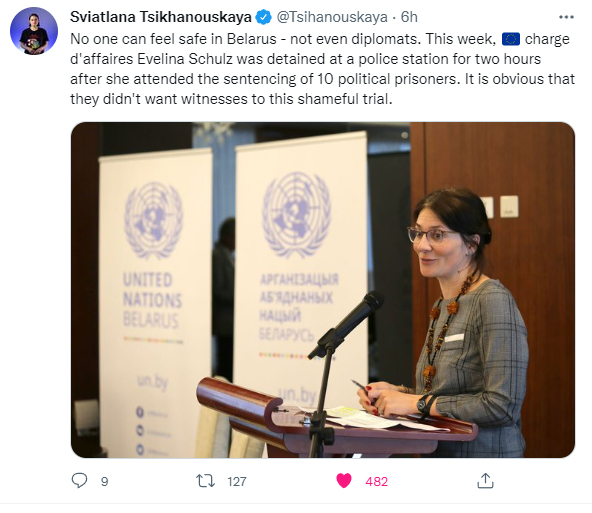 Along with Shultz, 13 other people were detained following the public hearing.  Of the 13 persons, several were relatives of those sentenced on the day.   As of filing this report, at least 2 persons were still being detained.  It is expected they will stand trial for “misdemeanor” offenses against the State.  Of note, Shultz was not the only foreign diplomat to attend the public hearing, however, she was the only diplomat detained by the regime.

EU spokesperson Peter Stano confirmed Shultz’s detention during yesterday’s routine briefing, “I can confirm this very unfortunate incident that happened the day before yesterday. It was an unacceptable and deplorable act of violation of diplomatic status. Our chargé d’affaires from the EU delegation in Minsk was detained and detained by the Belarusian police for more than two hours. This illegal detention of our diplomat is a serious violation of the Vienna Convention on Diplomatic Relations, which guarantees the personal inviolability of diplomats. Such actions undermine their (diplomats’) security.”

According to Stano, “This is already the second such incident related to the illegal detention of EU diplomatic personnel. We have already summoned the chargé d’affaires of Belarus in Brussels with a strong demand for an explanation regarding this incident and stressed that it should not be repeated.”

According to a Tweet by Sviatlana Tsikhanouskaya, who rightfully won the election for President of Belarus before the Lukashenka regime stole the election, forcing her to flee, “No one can feel safe in Belarus – not even diplomats.”