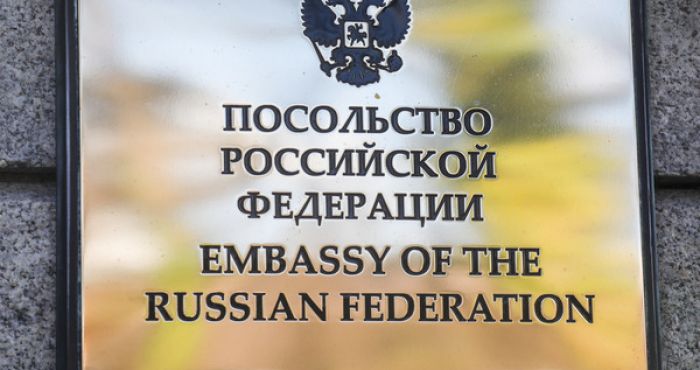 DUBLIN — In the midst of their viscous war on Ukraine there is something entirely delicious about Russia having to beg for the assistance of the Irish Government for oil.  It seems Moscow told its bankers to stock-up on cash reserves before they unleashed their latest round of bloodshed on their Ukrainian neighbours but the the memo failed to get to the Russian Federation Embassy in Dublin or its Ambassador, Mr. Yuriy Filatov.

In need of 3,000 litres of heating oil, Ambassador Filatov’s request for assistance from the Department of Foreign Affairs must be deeply humiliating.  Imagine exhausting all attempts to purchase fuel oil for their Embassy in Rathmines and being rejected time-after-time by businesses usually eager to make a profit.  According to reporting by the Irish Mirror today:

All this misses the point, entirely.  The Department of Foreign Affairs knows this and therefore their response and that of the Tanáiste is all the more disappointing.

For as long as the Government accredits the Russian Federation mission to function in Ireland it is obliged under Article 22 of the Vienna Convention on Diplomatic Relations (1961) to be of assistance.  It has a “special duty to take all appropriate steps to protect the premises of the mission against any intrusion or damage and to prevent any disturbance of the peace of the mission or impairment of its dignity“ [emphasis added].

The Department of Foreign Affairs should assist the Russian Federation in obtaining fuel oil and indeed, has a “special duty” to prevent this situation from becoming a public embarrassment on the part of the Russian Ambassador.  It is beneath the dignity of diplomatic relations to see any mission reduced to begging and humiliation just to stay warm.  It would not be an enviable position in which any Irish Ambassador would like to find themselves and in such a situation would surely raise an official protest from the Department of Foreign Affairs to that host nation.  Ireland knows this.  To claim it needs to check “to see if it was obliged to step in and help under the Vienna Convention” is patently ridiculous.  Diplomacy should rise above such pettiness and the Department of Foreign Affairs should take care lest such treatment befall an Irish mission in its hour of need.

To be certain, Russia deserves no respect, compassion or assistance from any person or the general public.  It does, however, deserve the universal benefit of the law.  After all, the horrors of what is taking place in Ukraine is the very product of one nation’s departure from the rule of law.   Although nowhere on the scale of Russia’s vile transgressions, Ireland need not mirror their flouting of law simply because it is in a position to do so because of popular opinion subsidises such crass conduct.

God knows Russia deserves disdain and condemnation for the cruel war it wages on the Ukrainian people, amongst its other crimes.  There remain plenty of reasons for the Russian Ambassador to debase himself before the public for the crimes of his country.  Yet even prisoners in their cells awaiting trial deserve warmth.  Let’s not trivialise diplomacy by humiliating the Ambassador of a murderous regime over something so little as this.

Russia deserves disdain and condemnation for the cruel war it wages on the Ukrainian people, amongst its other crimes.   Still, the continued damage done to the Russia Embassy after the 24 February escalation of their war on Ukraine should not have been allowed to take place.  It represents a failure on the part of the Department of Foreign Affairs and An Garda Síochána which was alarming to all missions who expect the protections of Article 22, whatever the public mood.  As for the Russian Embassy’s media release following the 7 March gate crashing incident, their assertion, “The incident is cause of extreme concern. We believe that no people of sound mind could support such senseless and barbaric actions”?  Well, it seems especially repugnant given Russia’s reported summary execution of civilians with their hands tied behind their back in Bucha.  One must wonder how the Russian mind manages to call a damaged gate barbaric but is silent on their butchering of innocent civilians.  But that is a matter for a war crimes trial.

The Department of Foreign Affairs is obliged to discharge its obligation under the Vienna Convention of 1961 and arrange for the Russian Embassy to obtain this basic necessity.  A debate about what constitutes an “impairment of a mission’s dignity” is in no one’s interest.  In all, this situation reflects badly upon Ireland’s commitment to the rule of law, the customs and courtesies of diplomacy.