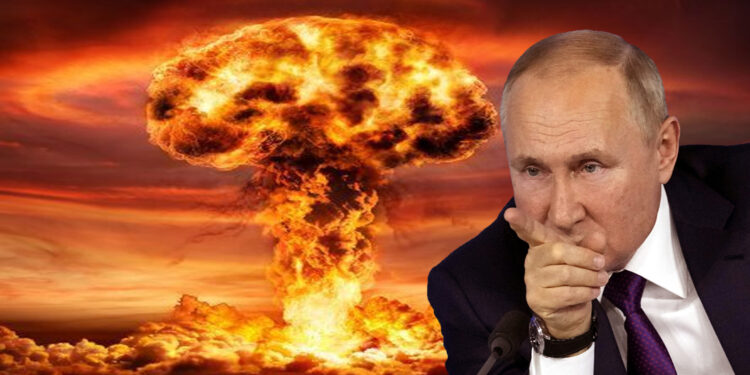 MOSCOW —  With hubris, bravado and a chilling voice emanating from his menacingly, smiling mouth, Russian Federation President Vladimir Putin issued a undeniable threat of nuclear war to the West at a Kremlin press conference this afternoon:

In the space of a mere 12-seconds, Putin threatened nuclear war with anyone, anywhere, that threatened to interfere with his ongoing crusade to create a new Russian empire over which he would preside as a self-ordained Tsar.   Europe can now only ignore him at their own peril.

Russia launched a multi-pronged invasion of the Ukrainian interior along the borders of Belarus, Russia and temporarily occupied Luhansk, Donetsk and Crimea overnight.  Civilian populations, critical infrastructure and military facilities have been pounded by Russian artillery, missiles, tanks and troops since just after midnight, some 16-hours ago.

Putin’s calculus, including factoring in his success in escaping accountability for all of his and Russia’s many evils, has led him to the conclusion that force works.  In real terms, Putin has estimated (and given history, rightly if not sadly so) that 22-years of   appeasement on matters large and small, economic and existential, the West simply has had no appetite to confront him.  For all of its rhetoric, the West, including the EU, OSCE, NATO and Europe’s transatlantic partners have found the political expediency of non-confrontation and the unreasoned belief that Putin was a rational actor that could be trusted has now imperiled the entirety of the European security architecture.

Hungary has already signaled it supports Putin and the Kremlin, creating an obstacle for NATO action, even if NATO wanted to act.  Speaking this afternoon, NATO Secretary General Jens Stoltenberg stated, “We have made it clear that we don’t have any plans and intention of deploying NATO troops to Ukraine”.  Absent a Russian attack on a NATO member country that would allow them to invoke Article 5, a clause that would trigger all alliance members to give ‘collective defense’ to the member country that has been attacked, little can be done by NATO.

NATO made an exception, however, carrying-out a crushing aerial bombing campaign against the Federal Republic of Yugoslavia during the Kosovo War.  NATO undertook the preventative bombing campaign in response to Yugoslavia’s campaign of ‘ethnic cleansing’ in a genocidal attempt to eradicate Muslims from the region by unfathomable acts of brutality.  The campaign, code-named ‘Operation Allied Force’ marked NATO’s 2nd major combat operation, the first being the 1995 bombing campaign in Bosnia and Herzegovina. Operation Allied Force was the first (and remains the only time) NATO employed military force without the prior, expressed endorsement of the United Nations Security Council (UNSC).

The United Nations Charter generally forbids military interventions in other sovereign countries.  Such decision are reserved for the UNSC, with few exceptions.  In the aftermath of NATO humanitarian intervention, Russia placed the matter before the UNSC.  Russia’s draft Resolution claimed, “such unilateral use of force constitutes a flagrant violation of the United Nations Charter”.  China, Namibia and Russia voted in favour of Russia’s Resolution, the other members uniformly voted against it.  Russia’s Resolution condemning the use of air power by NATO for life-saving, humanitarian operations therefore failed to pass.  The issue has remained a historical complaint of Russia since 1999, corresponding to when Putin came to power.  Others, however, including survivors of the genocide that took place during the Kosovo War, remain adamant that the extraordinary circumstance taking place created a positive obligation upon NATO powers to help.

What NATO might do to save the 47-million Ukrainians at risk of becoming additional victims to the 14,000 killed and more than 100,000 wounded by Russian and Russian-proxy forces since 2014 remains uncertain.  What is certain, however, is that by today reminding the West that Russia “remains one of the most powerful nuclear states…” he has thrown a pall over hopes for a quick or eventual diplomatic resolution of this conflict for the foreseeable future.

For anyone who might content that Putin would not be so mad as to use nuclear weapons, I would only commend watching Diplomacy in Ireland – European Diplomat’s 14 February 2022 interview Delusions and Destiny – Inside the Dark Mind of Vladimir Putin: Ian Robertson, Ph.D. of Trinity College Dublin on the Psychological Makeup of Putin.  When considered after reviewing Putin’s press conference with Russia’s Security Council on 21 February in which he engaged in publicly excoriating its members, it becomes clear that Putin, like all authoritarians, feels unrestrained by even those closest to him.  Watching Putin individually humiliate members of the Russian Security Council unto the point they were lost for words, left cowering in their seats or simply shrinking into the fabric of their clothes, or remaining mute with their heads bowed in the hopes of escaping Putin’s wrath, was chilling demonstration of the unbridled ‘Putin-the-Alpha-Male’.

And here is the problem with Putin’s less-than-veiled-threat to use his enormous nuclear arsenal — unlike Nikita Khrushchev who brought the world close to the brink of nuclear destruction during the Cuban Missile Crisis — Putin does not have a Supreme Soviet of powerful councilors with each maintaining a certain, menacing, portfolio of power based on subterfuge and blackmail that restrained Khruschev and every other Soviet leader.

Putin can no longer be deemed a rational actor.  His word and undertakings, and those of the Russian Federation, have been shown to be meaningless in light of his latest departure from a rules-based world order by unilaterally abandoning the Minsk Agreements.  Kremlin statements are simply reflections of Nazi Propagandist Josef Goebbel’s assertion, “If you say something often enough people will accept it as fact“.  Putin has irrevocably put the Russian Federation on a collision-course with the law-abiding world and risks the totality of European stability and peace on his gambit to create a new Russian empire.  The question remains, ‘Is it too late to do anything about it’?

Putin is convinced the West will once again allow him to get away his latest invasion and occupation.  With Macron facing re-election and Biden confronting mid-term elections, and with Scholz leading a neophyte coalition government, Putin is relying each will continue to place political expediency and their individual preservation of power over fundamental principles of law, order, morality and security.  For 22-years Putin has watched a succession of Western leaders follow this same pattern.  Today, Ukraine is paying an extremely high price (in addition to what has been extracted from them already) because of a consistent pattern of concessions by a litany of leaders whose decisions to avoid confrontation have only served to embolden and encourage Putin’s irrational and illegal conduct.  To underscore the point, George W. Bush actually praised Putin (as so many have), saying, “I looked [Putin] in the eye. I found him to be very straightforward and trustworthy. We had a very good dialogue. I was able to get a sense of his soul….”   Enough said.

Unlike 1939, there was no singular ‘Munich moment’ in the lead-up to today’s invasion of Ukraine such as the one that enabled Hitler to plunge Europe into World War II.  Rather, there have been hundreds of such moments of appeasement by the West through the years.  From accepting invasions and occupations to looking the other way when journalists were brutally murdered, dissidents were locked-away without due process of law and opponents were poisoned or met horrible fates, the non-confrontation policy of the West has been an abject failure.  All these missed opportunities for containment and deterrence only served to invite increasingly bellicose conduct by Putin – all without him ever paying a real price that might otherwise have discouraged Putin’s nefarious ambitions.  The half-hearted sanctions imposed over the years were, admittedly, inconvenient if not uncomfortable for Putin to endure.  But endure them he has without losing his stride.  In the final analysis, Western sanctions proved themselves to be mildly punitive measures enacted to placate the consciences of societies bent on consuming cheap Russian energy products, imposed by politicians who valued re-election and high poll numbers over the rule-of-law and enduring world order.  They have produced no change, whatsoever.  Even today the European Union refrained from sanctioning Putin personally.

With his overt reference to Russia’s nuclear capacity and capability, Putin has declared that he has no use for proportionality.  Putin has abandoned the practice of putting a gun to West’s head to obtain his desired goals.  He has declared, unequivocally, he is now predisposed to putt his finger on the nuclear trigger if expected to abide by international law.

Our worst nightmares have become reality.  We should have listened to Ukraine and Georgia many years ago.  Now we must face a nuclear-equipped madman much of our own making bent on creating a new Russian empire.