Attempt to Expel the Israeli Ambassador Misses the Point, Entirely 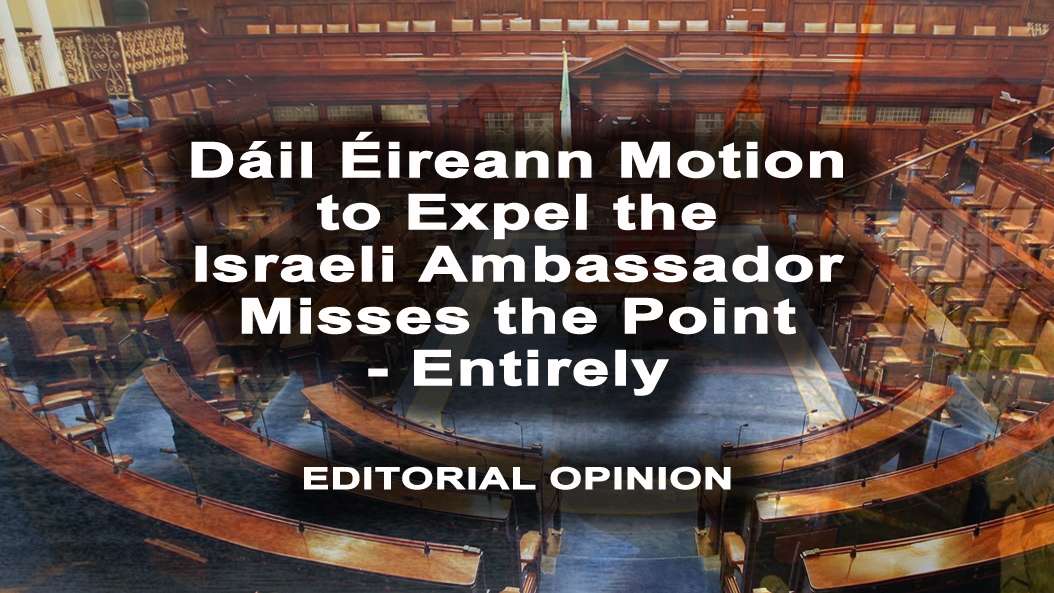 DUBLIN – The People Before Profit electoral alliance of left leaning socialists are collaborating with Sinn Fein to move a vote with the hopes of having Dáil Éireann call for the expulsion of His Excellency Mr. Ophir Kariv, the Israeli Ambassador.  The vote is scheduled to occur this evening, 26 May 2021.  Proposing to expel any Ambassador is a serious step in the course of bilateral and international relations.  Today’s demand to expel the Israeli Ambassador is simply a misguided attempt to substitute public humiliation for good policy.  It should fail.

The Editorial Opinion expressed herein is neither and endorsement or condemnation of Israel, its policies or the conduct of the Israeli Ambassador.  Opposing an attempt to expel the Israeli Ambassador by a vote of Dáil Éireann is based on the principles of the proper functioning of a democratic government which are predicated on the separation of Executive and Legislative powers.  An Taoisigh and their Cabinets must preserve their flexibility to employ informed judgment without Dáil Éireann dictating specific actions that may run contrary to complex, evolving and strategic decisions which are Executive decisions reserved for Government.  There is a reason that Foreign Policy is conducted by a Minister, and not a committee, though the Committee plays a vital and indispensable role in the foreign policy process.

This is not the first time Dáil Éireann has been encouraged by populist movements to expel an Israeli Ambassador.  From The Journal.ie to online petition sites, the call to expel Israel’s Ambassador to Ireland has been a repeated demand over the past decade.  Often it is made by passionate people with a keyboard but lacking reliable information.  Fortunately, Governments are administered by information, the resources of its diplomatic and consular corps and the expressed will of the electorate – not simply the latest public opinion trends or suggestions by party political strategists.

There is no doubt, however, that Foreign Affairs Minister, Simon Coveney, summed up the mood of the nation when today he said the motion and amendment are a “clear signal of the depth of feeling across Ireland.”  It is true – the Irish people are fed-up with the endless cycle of death, destruction, displacement and repugnant human rights violations that occur daily in the Occupied Palestinian Territories – and they are rightly so.

The point which Sinn Fein and People Before Profit miss, altogether, is not if Dáil Éireann should be demanding the Israeli Ambassador to be declared persona non grata for the sins of his Government, but why Dáil Éireann has repeatedly refused to look into the mirror and accuse itself of complicity by inaction, abatement and the daily, structural biases and subsidies that enable the nearly century-long misery which consumes the people of the Occupied Palestinian Territories and Israel to continue.  Yes.  In this regard, Dáil Éireann has much for which it must account.

A vote to expel an Ambassador is a dangerous step at any time, not the least of which arises when Ireland occupies a coveted seat on the United Nations Security Council.  While some might see an expulsion of an Israeli Ambassador by Israel at this time as an act of courage it is as inescapable as it is undeniable that many of our international partners will see it as an act of a petulant child throwing a tantrum for a situation sustained by their own conduct and/or inaction.  And here our the cultural, historic religious ethos of Ireland fails to rest in the mind of those supporting Sinn Fein and the People Before Profit’s motion to expel the Israeli Ambassador – such an act is a total abdication of Ireland’s collective sins of omission.

Ireland has a commitment to embrace the rule of law, human rights, crimes against humanity, ethnic cleansing and other ills of the human condition equally and robustly.  Yet, despite Russia invading and occupying parts of Georgia, Moldova and Ukraine, and attempting to illegally annex Crimea, there is never a populist movement led by Sinn Fein or People Before Profit to expel the Russian Ambassador.  When Russia poisoned the Skripals, the Russian Ambassador himself was not declared persona non grata.  When a Russian asylum seeker taking refuge in Germany was murdered by Russian State agents in a public park, again, no similar motion was moved.  After Russia downed flight MH17 with the loss of all on-board (including an Irish woman) there was no clamour for the expulsion of the Russian Ambassador.

Nor was expulsion demanded after the heinous attacks on the Syrian people (even hospitals) by the al Assad regime and its Russian advisors and military assets using banned chemical weapons.  After Russia invaded Eastern Ukraine and Crimea it has left more than 13,000 Ukrainians dead and more than 1.5 million more displaced under a cruel Russian occupation that sees its snipers and landmines kill indiscriminately, daily.  Where is Sinn Fein and People Before Profit’s call for the expulsion of the Russian Ambassador?  Where is the collective Irish outrage that should also accompany Russia’s annexation, murders, war crimes and the disappearance and jailing of dissidents?

The same is true of China where the Uyghurs have undergone what many argue is a ‘genocide’.  It could also be said of Myanmar where a military junta has abolished democratic government while killing its citizens without remorse or an end in sight.  There has been no agitation by socialists in Dáil Éireann to terminate diplomatic relations with Belarus even after they committed a brazen act of air piracy to violate the human rights of a single journalist while putting the passengers, crew and jet in peril by the threat of one of their fighter jets armed with air-to-air missiles.  The list of our collective and subjective amnesia could consume pages.

More pointedly, this motion simply misplaces Ireland’s own responsibility for the sad affairs of the Middle East by displacing blame for Dáil Éireann’s failures.  Those who offered this motion and amendment are engaged in the art of slight of hand – hoping we will believe what is before our eyes without looking behind the curtain.

The Occupied Territories Bill has been languishing in Leinster House for years, despite it promising to be a bold declaration of Ireland’s willingness to comply with our international and human rights law obligations.  As one simply example, it would ban the sale of goods in Ireland made in illegal settlements in the Occupied Palestinian Territories.  Since 1948 Ireland has failed to even once impose sanctions against Israel, a common diplomatic step, despite repeated outbreaks of conflict, expansion of settlements, confiscation of properties, deaths of children and civilians and demolition of entire communities.  There has also been an absence of truly critical examination of the role Hamas has played in the continuity of the conflict.  Dáil Éireann’s failures to act for the past decades have created a glaring stain on Ireland’s international reputation at a time when Sinn Fein and People Before Profit are asking Dáil Éireann to lay all the blame at the feat of the Israeli Ambassador.

To be certain, if Sinn Fein and People Before Profit prevail, it will not make a Palestinian sleep safer tonight, nor will it feed them, educated them, provide them real access to education, resolve land confiscations, address their complaints about apartheid or change their daily lives.  This is about domestic politics, period.

Its time for us to move beyond self-congratulatory rhetoric and actions that may well make us feel better about ourselves, but we should not allow Dáil Éireann to congratulate itself for its failures to take concrete steps to improve the lives of the Palestinian people beyond sending an endless stream of money while refusing to enact structural change that will finally see them live with dignity and peace.  As long as our economic and social policies subsidise the violence that has raged, now rages and will continue to rage into the foreseeable future, we are complicit.

Maintaining our relations with the Israeli government, with the presence of the Ambassador, extraordinary and plenipotentiary, is Ireland’s best way of communicating our views, values and demands for justice and peace.  With our seat on the United Nations Security Council, Ireland can use this opportunity to make real, measurable and implementable changes that will lift the Palestinian people out of the constant state of desperation in which they endure.  We should not forfeit our ‘bully pulpit’ for the sake of self congratulatory adulation.  Ireland has an opportunity to combine our bilateral relations with Israel with our seat on the United Nations Security Council to do some actual good.  We will have the opportunity to support the International Criminal Court who is investigating these very matters.  In short, there are many things we can do that will have an immediate and real effect for the good of the Palestinian people.  Expelling the Israeli Ambassador so we can feel superior is not one of them.

It is high=time for Dáil Éireann to finally enact real change and abandon populist motions that will be admired by voters but will fail to change the daily suffering of the Palestinian people.  Dáil Éireann should vote down this motion and amendment, refrain from the dangerous practice of micro-managing foreign policy by expelling the Israeli Ambassador and finally legislate in critical, meaningful and measurable ways.  The time for Dáil Éireann to act has long passed.