Ascendency of Abazović Hailed as Victory for a Multi-Cultural, Tolerant, Inclusive and Modern Montenegro 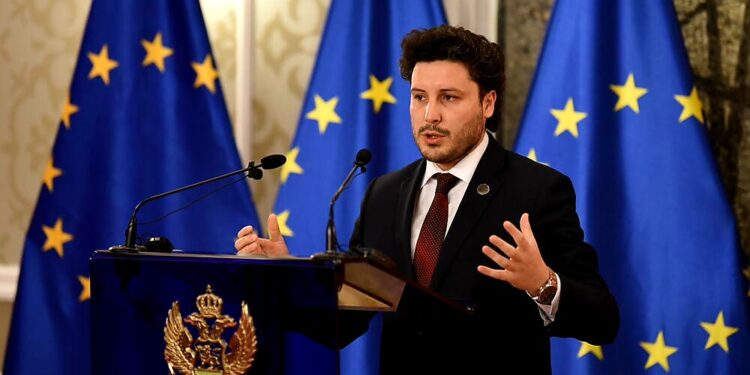 PODGORICA (Montenegro) — The Parliament of Montenegro today endorsed the formation of a minority Government.  Dritan Abazović, the leader of Montenegro’s centre-left, pro-European, social-liberal United Reform Action (URA) party was confirmed as the new Prime Minister of Montenegro.  The formation of the new government was supported by the Democratic Party of Socialists (DPS), a party led by Montenegro’s President and former Prime Minister Milo Djukanovic, despite having no representatives in the new Government.  In all, a 45-Members of Parliament supported the new, minority Government with 3-Members voting against it.  Representatives of the Democratic Front (DF), Peace is Our Nation and the Movement for Changes did not participate in the session which endorsed the new Government.  Montenegro has an 81-seat Parliament.

Abazović leads a coalition of pro-European legislators largely comprised of intellectuals, NGO activists, journalists and academics that have sought to steer Montenegro clearly on a European Union path, to embrace reform and ensure Montenegro continues as a multi-cultural, tolerant society that reflects its multi-ethnic makeup.  This movement led by Abazović has been heralded as having steered Montenegro clear of the internecine politics and culture wars that led the Balkans into a brutal period of armed conflict in the 1990s.

Montenegro, a Balkan nation of 620,000 on the Adriatic Sea, separated from Serbia in 2006.  Montenegro has continually moved away from its historic relationship with Moscow in the ensuing years.  It joined NATO in 2017.  Nevertheless, the country remains somewhat divided between those who see Montenegro’s future in the European Union and those who would prefer a return to the historic relationship with Serbia and Moscow.  It remains uncertain how Russia’s recently pariah status has influenced that divide and what influence it may have on the future of Montenegrin politics.

Abazović’s election as Prime Minister with only 3-dissenting votes is seen as a powerful message that his vision of a multi-cultural, tolerant and inclusive Montenegro integrating further into the EU is prevailing, albeit with 33-Members of Parliament abstaining from the vote.  The break with a 30-year political dynasty has, however, taken place and it is perceived to be monumental and Abazović now has a clear mandate, compelling momentum and the tides of history on his side.

The election of Abazović as Prime Minister marks the first real democratic change in Government in Montenegro since its independence.  President Milo Đukanović and the Democratic Party of Socialists (DPS) previously controlled the government for over 30-years.  This election is widely regarded as a break from the past in both leadership and policy.

The new government will consist of 18 ministries and includes representatives of URA, the Socialist People’s Party (SNP), the Social Democratic Party (SDP) as well as the minority Bosniak Party and Albanian Coalition. In a debate prior to the vote, Abazović laid out the paramount goal of his agenda for Montenegro, “I believe that Montenegro can request an accelerated accession and that it can soon become a full member of the EU with urgent but wise decisions. This is our most important goal.”  Prior to the escalation of the war in Ukraine by Russia in February which saw an accelerated EU membership process placed  before Ukraine, Georgia and Moldova, Montenegro was long held to be the next State to join the EU.

The Parliament also elected Danijela Djurovic from SNP as speaker.

Brussel’s reaction was both warm and anticipated.  Josep Borrell, the High Representative of the European Union for Foreign Affairs and Security Policy tweeted after the outcome of the vote was announced, “Welcome the new government of Prime Minister Dritan Abazović in Montenegro. Looking forward to our joint work for tangible progress on EU path. Montenegro is a trusted partner, fully aligned with the EU’s foreign policy.”

Abazović previously served as Deputy Prime Minister in the Government of Krivokapic.  In February, he filed a no-confidence motion against the government of Krivokapic over stalled EU accession process which brought down the Government.   Abazović also objected to the overt influence of the Serbian Orthodox Church in Montenegro’s domestic affairs which threatened to return the society to monolithic control which exacerbated social and political divisions in the country.  The progress made by Montenegro in creating a stable, inclusive society was in the balance.  Abazović prevailed.

Last month, while Krivokapic remained in office with the lame-duck Government before today’s vote, Abazović prevailed in a crucial vote that was seen as a test of his leadership when the Krivokapic Government began to backslide on promises to take part in the EU sanctions regime against Moscow.  Abazović was instrumental in reversing the policy and ensuring Montenegro remained a reliable partner of the EU and international community and did not allow Russian oligarchs to use Montenegro to hide assets including luxury yachts.