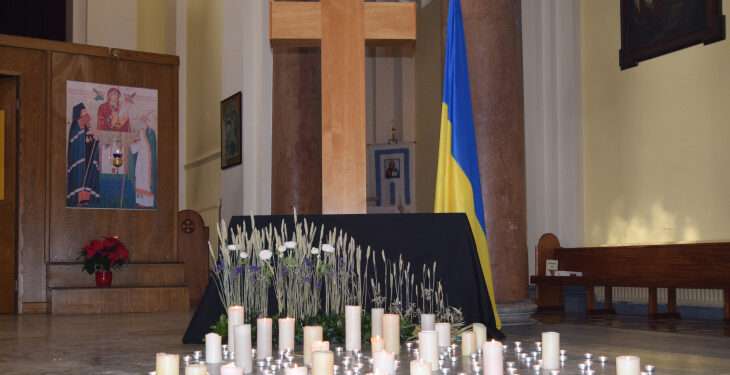 DUBLIN – Ukrainian Chargé d’Affaires Mrs. Olena Shaloput marked the end of the annual Month of Remembrance to commemorate the Holodomor.  The Holodomor (Ukrainian: Голодомо́р, romanised: Holodomór; derived from морити голодом, moryty holodom, ‘to kill by starvation’) resulted in the death of upwards of 10 million Ukrainians between 1932-1933 when Soviet leader Josef Stalin ordered the confiscation of all grain and foodstuffs for export to Russia, leaving millions of Ukrainians, including various ethnic groups within Ukraine, to starve unto death.  Each year Ukrainians in Ireland, and the international diaspora, join Ukrainians at home in lighting candles to commemorate the Holodomor dead, marking the end of a month-long series of commemorations.

Commemorations Move Online in Ireland and Across Globe

Owing to the Covid-19 pandemic, this year’s commemorations were largely conducted online, with members of the Ukrainian Diaspora in Ireland hosting a webinar, ‘Talk About Holodomor: Save the Memory – Save the Truth.’  Sunday’s ZOOM event, open to the public, was Moderated by Father Vasily Komitsky of the Ukrainian Greek-Catholic Church in Ireland and opening remarks were delivered by Chargé d’Affaires ad interim Mrs. Olena Shaloput of the Ukrainian Embassy in Ireland.  Other panellists included historians, researchers and officials from the Institute of National Memory of Ukraine in Kyiv.

“Our theme, ‘Save the Memory – Save the Truth’ has been adopted by Ukrainians worldwide,” said Michael Baskin, a leader in the Association of Ukrainians in Ireland.  “It was developed by the Institute of National Memory in Kyiv to assist Ukrainians in not only recalling the horrific human toll the Holodomor caused us, but to assist us in communicating to people around the globe the danger imposed by oppressive regimes, even today,” he continued.

While on 9 May 1990 the Under-Secretary for Human Rights (Geneva) received the United Nations final report of the International Commission of Inquiry into the 1932-1933 Famine in Ukraine concluded the Holodomor to in fact, be genocide, as with the Shoa, the Armenian Genocide and other atrocities, deniers remain, despite the abundance of proof.  More than 17 nations have officially declared the Holodomor to be an act of genocide.

Asked about those who deny the genocidal nature of the Holodomor, or seek to diminish it, Michael Baskin replied, “The Ukrainian Diaspora gathers in Dublin and internationally because it helps us to understand the price Ukrainians have paid for simply maintaining our national identity and how, under communism, secrecy and media manipulation was used as a tool to hide the crimes.  We also have a broader ethic with ‘Keep the Memory – Keep the Truth’ – sharing our experience with the world helps people understand the human aspect of the threat oppressive regimes pose to free and independent people everywhere.”

Grain seizures were followed by land confiscation and collectivisation which saw cultivation fall dramatically.  All the while, the diminished crop output was largely exported to Russia for consumption and international sale in order to generate much-needed revenue for the Soviet treasury which lacked other export materials.  Substantial independent farmers known as Kulaks, as well as small family farms, were deprived of even maintaining seeds for the next year’s harvest which caused long-term food insecurity.  It became a capital crime to withhold any amount of grain.  Occasionally, a small jar containing seeds from the period are found buried, demonstrating how aggressive grain seizures were.  Stalin’s policy imposed land confiscation and the establishment of collectivised farms.

Given the lack of agricultural experience of people forced to work on collectives, and being devoid of farming tools due to Russia’s lack of industrialisation, Ukrainian were forced to work the fields with their hands, further diminishing per-acre harvest output even as Moscow demanded greater quotas.  Political appointees began to manipulate statistics to appear to meet quotas and shift the blame to others, causing a total collapse of an already perverse agro-economic policy.  The absurdity of Stalin’s policies from the period is reflected in the era through dark-humour.  In one such story, Stalin asked a collective worker about crop production quotas to which the worker replied, “Comrade Stalin, the wheat is piled high, up unto heaven,” to which Stalin replies, “Comrade Worker, you know there is no Heaven!”  The worker replied, “That’s OK tovarisch, there is no wheat either.”

Throughout the Holodomor, Stalin imposed strict media controls on the closed-border Soviet Union.  One reporter, a close friend of, and advisor to US President Franklin Delano Roosevelt, Walter Duranty, of the New York Times, became an instrument of Stalin and the USSR’s campaign to hide the truth.  Duranty, a Pulitzer Prize winner, used his status to minimise the truth about the Holodomor, denying fundamental aspects of it as being ‘fake news.’

Other journalists, including Malcolm Muggeridge, Gareth Jones and Rhea Clyman all wrote factually about the Holodomor but their reporting was dismissed owing, in large part to Duranty’s prestige.  Stalin, for his part, organised tours of impacted areas, creating virtual ‘Potemkin Villages’ for international visitors by re-populating and rehabilitating towns that were virtually wiped-out and presenting them as ordinary examples of the ‘supposedly’ starving regions.  After the fall of the USSR a record began to emerge of how comprehensive such efforts were and how successfully they were employed to hide the truth.

Historians have long-noted the similarities between the agricultural-economic policies that created the Holodomor being analogous to those suffered by Ireland during An Gorta Mór (Great Hunger) which saw the population starve while produce was exported and sold externally by occupying foreign powers.

“Knowing Ireland was starved during An Gorta Mór (the Great Hunger) by an oppressive occupier and yet emerged as a proud, independent, caring and successful State today, whose sons and daughters are known for their commitment to charity, humanitarianism and peacekeeping gives us hope,” said Baskin.  “We too gained our independence, although late in the last century, and aspire to writing the same success story for Ukraine, as Ukrainians and as Europeans who also have to come to terms with our tragic history without losing our culture, faith and heritage – those things which make us unique as Ukrainians.”

There are several good resources for learning more about the Holodomor:

Educational Websites on the Holodomor

Holodomor Research and Education Consortium A project of the Canadian Institute of Ukrainian Studies, University of Alberta www.education.holodomor.ca/ and www.holodomor.ca

This website contains research-based, reliable content and curricular materials on the Holodomor for grades 6-12. Educational materials found here include background information for teachers and students, memoirs of survivors, primary documents, newspaper articles, excerpts from literature, as well as a variety of suggested lesson plans and assignments. Emphasis is placed on developing historical and critical thinking skills using a variety of strategies that complement curricula expectations in a number of provinces. The site has an excellent list of resources and links.

Developed by educators throughout Canada for use in K-12 and for school events, this site draws together dozens of lesson plans, PowerPoint presentations, and background materials on the Holodomor and is grouped by grade level. Although some of the materials are designed for use in Catholic schools, all the resources can be adapted as needed.

This site provides general information and includes an “Information Links” page that offers a categorized and regularly updated list of carefully selected print and media 2 titles and direct links to a wide range of Holodomor resources.

“Exposing the Ukrainian Holodomor – How starvation was used as a political weapon,” 2017. (Unit 2, Chapter 5). Free curriculum-based teaching resource from “Voices into Action,” 2017. www.voicesintoaction.ca/Learn/Unit2/Chapter5/

This is a resource for educators prepared by the Saskatchewan Holodomor Awareness and Education Committee for Voices into Action. Unit 2 of the online resource provides information on five genocides. Chapter 5 is dedicated to the study of the Holodomor.

Documentaries on the Holodomor

Genocide Revealed. Educational Version, 2013. Directed by Yurij Luhovy. The 26- and 52- minute versions are on a single DVD for classroom use. To purchase the DVD: http://www.yluhovy.com

Harvest of Despair: The 1932-33 Man-Made Famine in Ukraine. Directed by Slavko Nowytski and Yurij Luhovy. Toronto, 1984. 55 min. To purchase the DVD: www.ucrdc.org/Films.html  or contact: info@ucrdc.org https://www.youtube.com/watch?v=vOVe59GM-EQ

Harvest of Despair is a feature-length documentary containing excellent background information on the Famine and its cover-up. Produced in the 1980s, it remains one of the best overall presentations on the history of the Holodomor within the context of world events, with an emphasis on how the world reacted.

The opening 11 minutes of the film describe the 1932-33 Holodomor and can serve as a powerful introduction to the topic. The film outlines Stalin’s murderous regime from its inception through its early complicity with the Nazis and describes the impact of this legacy today.

This 30-minute film is appropriate for grades 7-12. It presents the personal stories of 25 Ukrainian-Canadian survivors who were children in the 1930s, many of whom were orphaned and suffered severe illnesses and trauma. The film is interwoven with drawings that illustrate their experiences, rare archival footage, Soviet propaganda posters, and photos.

Klid, Bohdan and Alexander Motyl, eds. The Holodomor Reader: A Sourcebook on the Famine of 1932-1933 in Ukraine. Edmonton and Toronto: CIUS Press, 2012.

Articles on the Holodomor

Lemkin, Raphael. “Soviet Genocide in the Ukraine” 1953.  Lemkin, who coined the word “genocide” and worked on the UN Convention on Genocide, asserts that events in Ukraine in the early 1930s were “the classic example of Soviet genocide.” He concludes “This is not simply a case of mass murder. It is a case of genocide, of the destruction, not of individuals only, but of a culture and a nation.” www.education.holodomor.ca/teaching-materials/role-of-lemkin/

Ukraine and Holodomor – An Explainer Video from Diplomat Ireland