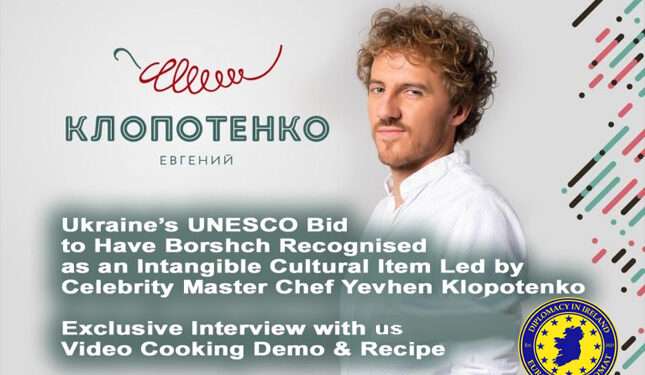 KYIV – I have had the pleasure of interviewing Heads of State, Ministers of Foreign Affairs, the UN Secretary General and senior Ambassadors and diplomats, but never have I had the chance to interview a Chef whose fame was cemented when National Geographic profiled him and his restaurant, Сто років тому вперед – ranked “One of the World’s 50 Best Restaurants”.  Trained at the famed La Cordon Bleu culinary school in Paris, Chef Yevhen Klopotenko won acclaim as Master Chef – Ukraine in 2015.  He hosts a YouTube Channel here.

Today, Chef Klopotenko is using his fame and prestige to promote Ukraine’s national dish, Borshch, in a bid to have UNESCO recognise it as one of Ukraine’s intangible cultural items.  I had the chance to interview Chef Klopotenko on the ancient and authentic Ukrainian dish, Borshch (sometimes mistranslated as borscht or borsch) and he shared one of his favourite Borshch recipes with Diplomacy in Ireland – The European Diplomat and you can learn how to cook it in a special cooking demonstration he performs at the end of his interview.

Borshch is an authentic Ukrainian dish dating to the period in which St. Volodomyr the Great, Grand Prince of Kyiv and Ruler of the Kyivan-Rus.  Since at least the 11th century, Ukraine has made Borshch as a staple food of its national cuisine.  Russian’s borrowed the recipe after their invasion and occupation of Ukraine in the late 18th century which is where the misnomer that it is “Russian Soup” arises.  Borshch, however, is not a Russian food item but rather one of the many items that Russians misappropriated from the many countries they invaded during their colonial and communist era and now try to call their own.  Today, the world acknowledges Borshch as an authentically Ukrainian food.

Hello dears!  I’m glad to share this recipe with Diplomacy in Ireland – The European Diplomat for you to enjoy.

My name is Yevhen Klopotenko.  I’m a Ukrainian chef.  This is my debut video and it’s all about Borshch.  I am helping lead an effort to have Borshch, one of our ancient and authentic national dishes of Ukraine, named to the UNESCO list of intangible cultural items belonging to Ukraine.

With the help of Diplomacy in Ireland – The European Diplomat I will share with you how to cook mouth watering Red Borshch with Pork Ribs.  It has extremely wonderful flavours and has even twice as good taste.

Ukrainian soul lives in Ukrainian Borshch and I want you to feel it fully.   You’ll definitely like it!  Enjoy this video and the Borshch!

How To Cook Borshch

The Heart of Borshch is Pre-Roasted Vegetables

Congratulations, Our Borshch Is Almost Ready!

Put the rest of the Borscht in a fridge and remember that it tastes better the next day.

Thank you to Miceál O’Hurley, Oksana Shadrina and Diplomacy in Ireland – The European Diplomat for helping Ukraine promote one of our national dishes – Borshch.  Enjoy!