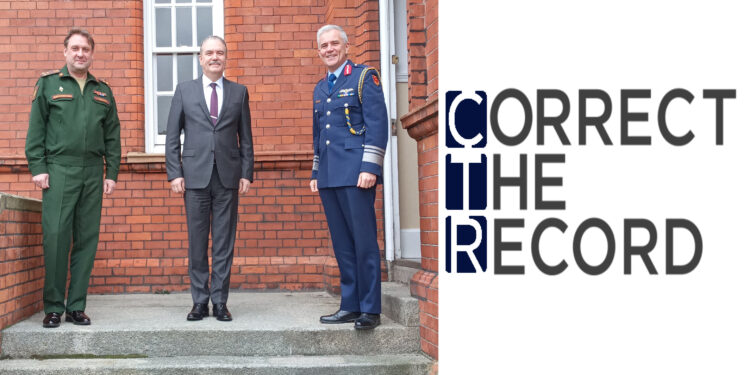 DUBLIN – On 23 January 2022, Diplomacy in Ireland – European Diplomat published a story, Mixed-Messaging from Ireland on European Unity & Security — News & Analysis under my by-line.  I am responsible for the content of that article.

I must now clarify information that has only just come into my possession to set the record straight.  This is my responsibility as a journalist.

The photograph was taken at the Chief of Staff’s offices and not the Russian Embassy.  The occasion of the visit, I have only just been able to learn, was a long-scheduled, routine meeting between the Chief of Staff and one of the handful of military attaché that are present in Ireland – in this case, the Military Attaché of the Russian Federation.  I have further learned that it is customary during these routine visits for the Ambassador of the sending Embassy to accompany their military attaché on their first visit as a matter of long-standing protocol.

It is worth revisiting the actions (or in this case the inaction on the part of the Department of Foreign Affairs and Defense Forces Press Offices) that led to the discrepancies in my reporting and in other media sources.

It is my policy, and that of Diplomacy in Ireland – European Diplomat to be careful with sources and fact checking.  In writing this story I personally emailed both the Department of Foreign Affairs and the Defense Forces press offices for comment prior to publication.  I was directed by the Department of Foreign Affairs to seek answers to my questions from the Defense Forces.  I not only telephoned the Defense Forces Press Office but sent an email and text message as well.  This was stated in my article.  Out of an abundance of caution, given the seriousness of the issue, I took the exceptional step of delaying publication of the article to allow for a prompt response from the Defense Forces (breaking a story is not as important as getting it right).  While I did get a telephone call from their Press Office asking to to send an email (which I did – with the promise of a prompt reply), no reply was given until the following day, long after the story was published.

I am satisfied that I was reasonable, prudent and responsible in attempting to gather information for the article and provided both the Department of Foreign Affairs and Defense Forces more than ample opportunity to respond to my several enquiries.  In over 30-years of working as a journalist, around the world, it is necessary to state for clarity that it has becomes too routine for Government press offices to simply ignore enquiries where there is a legitimate public interest.  Such practices are inherently detrimental to the transparency, openness, cooperation and responsibility to the public interest.  Of greater concern is that such practices of simply ignoring media requests, especially from credentialed journalists, has proven hazardous to the Government’s trust and reputation, for which the blame rests on their inability or refusal to communicate effectively with members of the media.

The world has long moved-on from the days where ‘stonewalling‘ is accepted or effective.  Eventually, the truth emerges and almost always because of a refusal to engage with the media in a responsible and professional manner.

As I wrote in the original article:

My information about, and confidence in Lieutenant Genereal Clancy, remains the same.  I still have every belief that he is a man of good judgment, intellect and capabilities.  He retains my respect (and yes, admiration), and I believes deserves the public’s too.  He would not be the first person in history to have a photograph circulated that portrays something as ominous when it was not (the Russian Embassy’s attempt to bring discredit upon the Chief of Staff and mischaracterise the meeting much to their benefit is shameful).  Here, it is also worth reporting that at the time of the meeting, the Russian Federation Ambassador had not forewarned the Irish Government about their plans to hold naval exercises in Ireland’s Exclusive Economic Zone.  From all accounts now available, the Chief of Staff was not aprised of Russia’s plans, albeit it would be more than reasonble to believe Ambassador Filatov was aware of them when he met with General Clancy.

The timing of the meeting and photograph was extremely unfortunate, but was owing in no part to Lieutenant General Clancy.  True, many would have called-off such a meeting given Russia’s build-up of combat forces to threaten yet another invasion of Ukraine/  But, that was a judgment call and there is a legitimate argument to be made that it is better to have established the relationship with the Russian Federation Military Attaché sooner, rather than later.

I am more than happy to correct the record on information that has come to me by a member of the Oireachtas Joint Committee on Foreign Affairs and Defense.  The facts should and must be know.  It remains puzzling why this information had to come from a member of the Committee and was not provided b either the Department of Foreign Affairs or Defense Forces Press Offices who duty it is to work with journalist to ensure the truth will out.

I do regret that both the Chief of Staff and the Irish Government ‘took it on the chin‘ from myself and others in the media, not to mention numerous memes and social media post by the hoi polloi simply because of a misguided, lingering belief that they can pick-and-choose when or if they will respond to media requests.  Sadly, they have again done so by self-inflicted injury and the affair could have been entirely avoided with a simple response.  It seems to be a pattern throughout government over the years.

The saying goes, ‘Democracy Dies in Darkness‘.  It is the duty of the media to shine the light of day on matters of public importance.  Trying to keep the media in the dark simply sets-up an unnecessary adversarial relationship and is a disservice to the public interest.  It is incumbent on Government press offices to be more responsive or better yet, proactive with providing information, to avoid such situations continually arising.