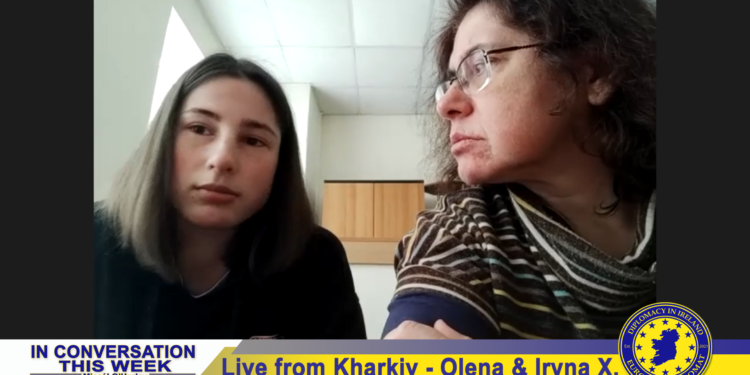 KHARKIV — Mother and daughter Olena and Iryna X. (names changed to protect their identity) spoke with Diplomacy in Ireland – European Diplomat from an undisclosed location in Kharkiv.  The video, the visual of which conveys cool and calm, and the demeanor of the mother and daughter can only be described as cheerful, hopeful and filled with esprit de corps, belies the real danger Olena and Iryna face.

This reporter teared-up and held back depriving them of hope by telling them of the state of affairs in Russia’s conquest of Kharkiv and the West’s preparations for a ‘Ukrainian Government in Exile’.  They would not have believed me and injuring their sense of hope would only have been cruel.

Russian forces have been fought to a standstill in battles reminiscent of historic battles of the past.  Ukraine’s armed forces, out-staffed, under-equipped and stretched beyond mortal reason, have put-up an incredible resistance, bringing Russia’s ground operations to a standstill.  Putin has now commanded his forces to change tactics and has been engaged in aerial and missile attacks against civilian populations centres in violation of international law.  This is the danger Olena and Iryna face as their fellow citizens of Kharkiv, Kyiv and population centres around Ukraine are dying without ever seeing the face of the enemy.

Still, Olena and Iryna have confidence in President Zelenskii, their armed forces and the people of Ukraine.  It is not misplaced.  However, any expectation that the West will do more than attempt to put a bandage on the fastest growing humanitarian crisis in Europe since World War II is misplaced.  The West betrayed Ukraine by shirking its responsibilities under the Budapest Memorandum where Ukraine made the world safer by exchanging security guarantees to put what was then the 3rd largest nuclear arsenal in the world beyond use.

Little changed when Russia invaded and occupied Luhansk, Donetsk and Crimea.  Western sanctions were lackluster and their commitment to Ukraine continued to be non-committal.  From Western leaders to rank-and-file civil servants who tarried and failed to assist Ukraine before it was too late, Ukraine was offered up as a ‘lamb to the slaughter’.  Now her future hangs in the balance as Western Governments have spoken publicly about plans for a ‘continuation of authority’ with a ‘Ukrainian Government in Exile’. When told of these announcements, Olena and Iryna laughed in disbelief.  They made clear, “Ukraine will never give up”.  That, of course, is not the issue.  The issue remains, the West gave up on Ukraine years ago and for all the incredibly outpourings of humanitarian aid, it will not wash the bloodstains from Western hands.

I am reproducing below an extract from a previous article which Diplomacy in Ireland – European Diplomat believes needs to be repeated.

In battles that will be remembered alongside Thermopylae and Bastogne, Ukrainians are fighting, falling, rising-up again and defending their homeland in towns the name of which the West will remember for eternity.  By their blood sacrifice and heroism, endurance and determination, Ukrainians are giving humanity a lesson in the true cost of freedom, democracy, human rights and self-determination.  Europe’s future is not being forged in Brussels or Berlin but in Kyiv and Kharkiv, Odesa and Sumy.