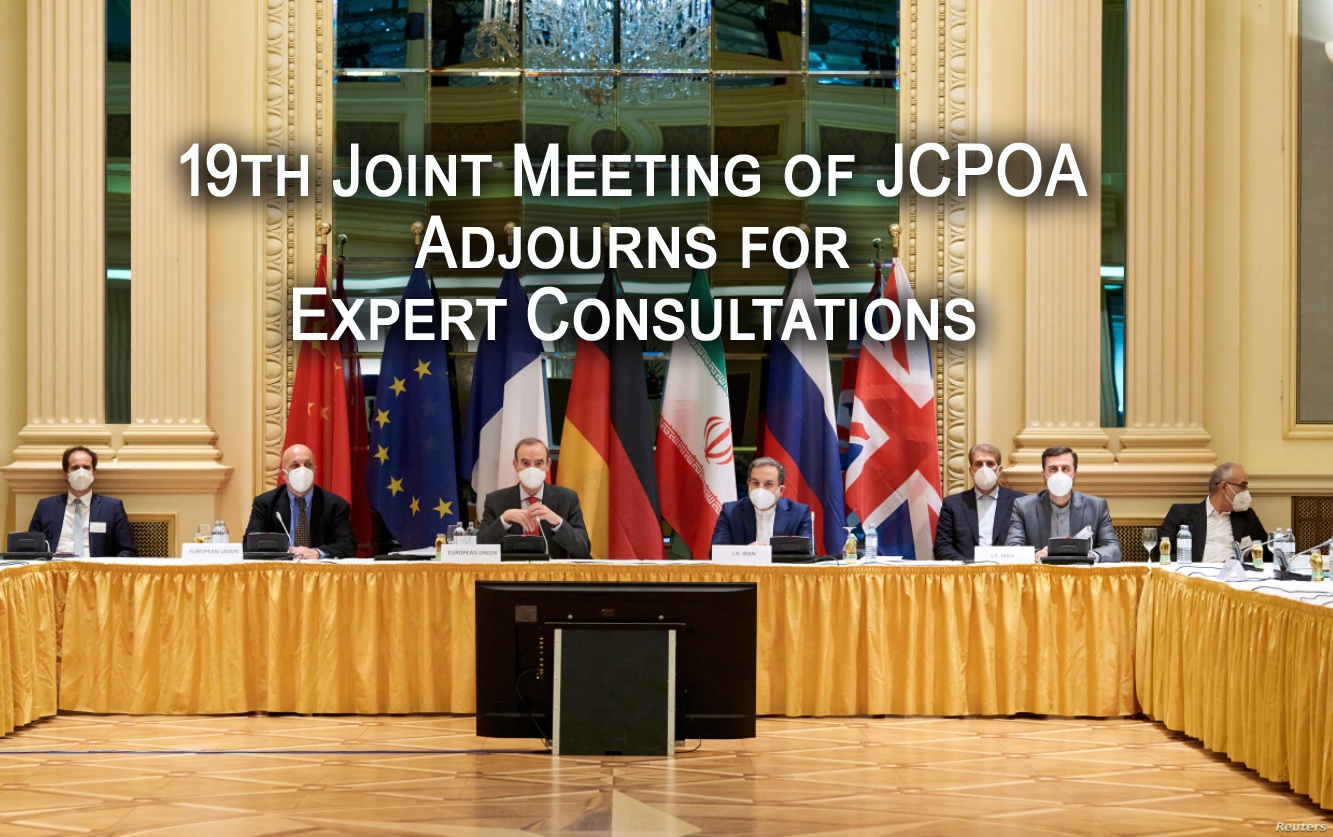 VIENNA – The 19th Joint Meeting of the Joint Comprehensive Plan of Action (JCPOA) ended yesterday in Vienna.  All JCPOA members participants supported a US return to deal according to a press release by the German Foreign Ministry.  The meeting was attended by Iran and representatives of Britain, China, France, Germany and Russia.  A US delegation travelled to Vienna but did not take part in face-to-face conversations with Iran.  The five permanent members of the United Nations Security Council (UNSC), with the addition of Germany, is commonly referred to as the ‘P5+1’ group.

Prior to the meeting, US State Department spokesperson Ned Price told a press conference that US Special Envoy for Iran, Robert Malley, would lead the US delegation to the Vienna talks.   The US withdrew from the JCPOA upon orders from then President Donald Trump in 2018.  Price said the U.S. would consider lifting the Trump re-imposed nuclear-related sanctions on Iran in return for “…more permanent and verifiable limits” on the Iranian nuclear program.

Veteran Iranian Foreign Ministry spokesman, Saeed Khatibzadeh, re-stated Iran’s position that the talks should focus on the US lifting what he called its, “cruel” Iran sanctions.  He said Tehran would reject the US taking a “step-by-step” approach to resolving the impasse with any expectation that Iran would be obliged to resume JCPOA compliance.   According to Khatibzadeh, “We (seek) only one step, which includes lifting of all US sanctions.  In return, Iran is ready to suspend its remedial measures and reverse actions.”

Despite withdrawing from the agreement, and reinstating sanctions on Iran, the US has continued to criticise Iran for non-compliance with the JCPOA.  President Joe Biden and his national security team has prodded Tehran to return to the JCPOA in exchange for the US to return to the deal and lift sanctions.  The International Atomic Energy Agency (IAEA) had verified that Iran was in fact in compliance with the JCPOA, for over a year after the US withdrew from the agreement.  Since then, Tehran has been adamant that the US must both rejoin the JCPOA and lift sanctions as precursors to their resuming full compliance with the deal, outright rejecting further demands by the US to renegotiate the deal or expand it to include ballistic missile and other restrictions.

Tehran maintains that Washington’s desire to renegotiate the 2015 JCPOA is unnecessary, and therefore direct talks with the US would serve no meaningful purpose.  Several of the provisions in the JCPOA have ‘sunset provisions’ that expire in the not-too-distant future.  Speaking on background, a P5+1 participant in Vienna told DiplomacyIreland.eu that while the participants were of the consensus that the US should rejoin the JCPOA, patience was “wearing thin and if the Biden Administration doesn’t act quickly his language about a renewed US commitment to multilateralism would have to be accepted as empty rhetoric by America’s long-term allies.”

The 19th Joint Meeting adjourned with an agreement to engage in consultations at the ‘expert level’.  According to the participants, two parallel meetings between the JCPOA participants were held for the purpose of ‘technical consultations’ regarding nuclear weapons issues and lifting sanctions with reports being reported to the Commission without delay.

An Iranian senior negotiator, Abbas Araqchi, Deputy Foreign Minister for Political Affairs, stressed that it is incumbent on the US to first lift sanction in order to revive the deal.  Araqchi reiterated Iran’s readiness and willingness to re-embrace its JCPOA commitments upon the full and durable lifting of US sanctions being verified by Tehran.

The pressure is now on President Biden to deliver on his campaign promise to rejoin the JCPOA.  P5+1 participants have generally opined that once the US rejoins the deal and the lifting of sanctions can be verified will it be possible to restart the JCPOA.  The IAEA has indicated its readiness to return to robust inspections.  For President Biden, largely considered a pragmatist adjudged on his tenure in politics since the early 1970s, considerations of re-negotiating the deal or expanding it to cover collateral security issues that could not be resolved in 2015 now must appear wishful if not misguided.

With the Biden Administration assuming a pointedly confrontational approach to both Russia and China the calculus in the Department of State and National Security Council must include the limited resources available to the US as well as the potential for the opportunity to become a distraction to President Biden’s otherwise successful start in domestic politics and re-starting the American economy after the Covid-19 crisis and fumbled vaccination plans of his failed predecessor, former President Donald Trump.