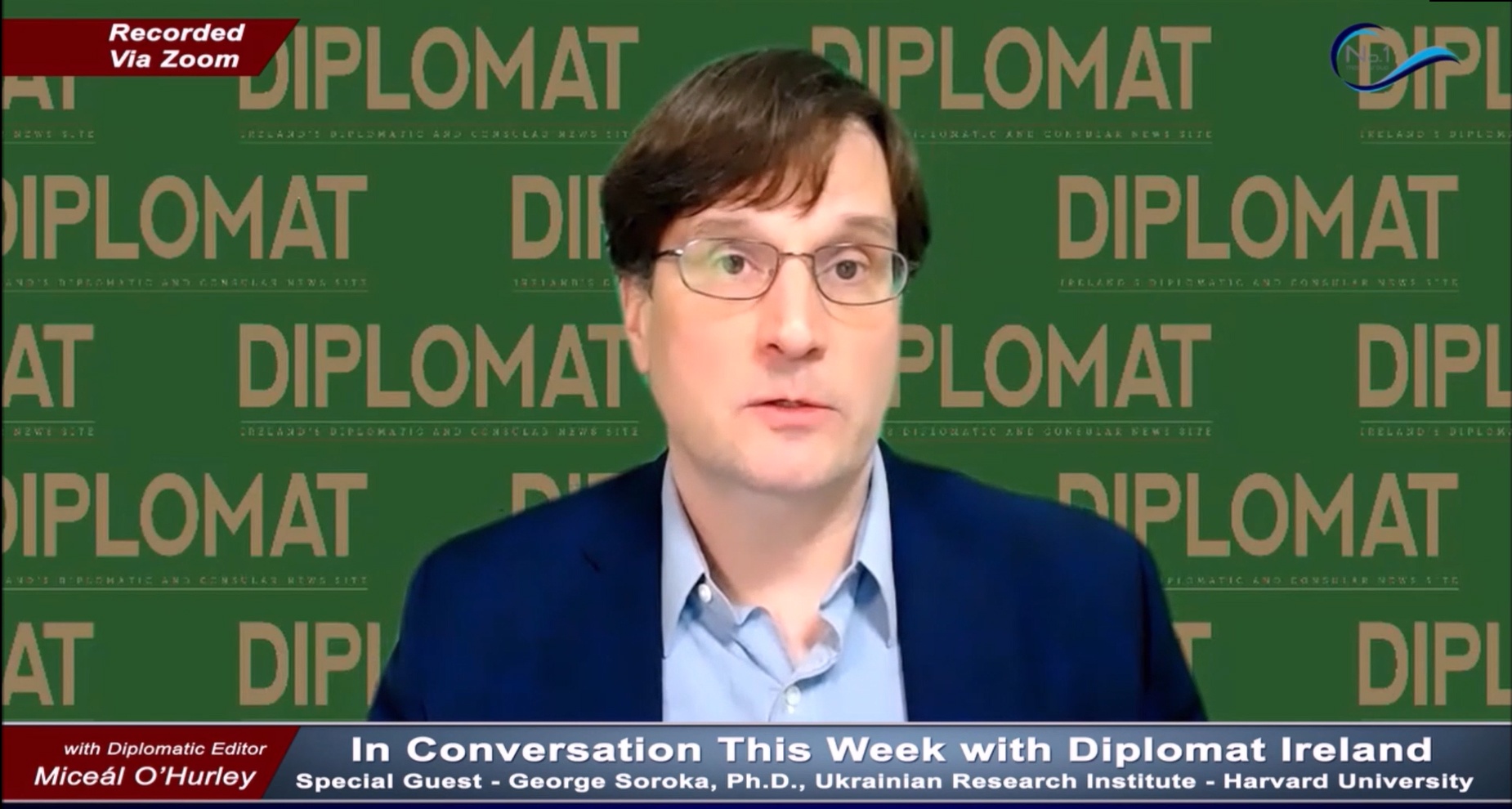 DUBLIN – George Sorika, Ph.D., a scholar at Harvard University’s Ukrainian Research Institute discussed the academic views on the Crimea Crisis in the latest episode of In Conversation This Week with Miceal O’Hurley.

Dr. Soroka, who earned a Master’s degree in Russian, East European and Central Asian Studies (REECA) at Harvard’s Davis Center for Russian and Eurasian Studies.  Realizing that his core intellectual interests lay in deciphering how elites gain, transfer and legitimate the use of power — whether it be religious, military, economic or political — Dr. Soroka finished his scholarly journey by obtaining a PhD in Political Science (also at Harvard).  His dissertation examined how contentious historical episodes and moralizing rhetoric were utilized by Russia to justify present-day foreign policy decisions, such as the annexation of Crimea.  Specifically, Dr. Soroka looked at contemporary relations between Russia, Poland, Ukraine and the EU through the lens of the 1940 Katyn massacre, the 1932-1933 Holodomor, and post-communist attempts by East-Central European politicians to equate the crimes of Stalinism to those of Nazism.  This project has morphed into a sizable book manuscript, one which combines historical analysis with qualitative process-tracing, elite interviews and quantitative content-analysis of speeches and policy statements.

The interview with Dr. Soroka focusing on the Crimea Crisis is the latest in DiplomacyIreland.eu’s efforts to cover the affairs of the diplomatic corps and provide knowledge-based information for our viewers.

International Criminal Court Prosecutor Believes War Crimes and Crimes Against Humanity Committed in Occupied Ukraine
Given the diverging views presented by interested parties in the current Crimea Crisis which began when Russia attempted to annex Crimea in 2014 following Euromaidan, the Crimean Peninsula has remained the centre of the region’s political affairs, earning Russia continued sanctions from the UN and EU for what they consider breaches of international law and the use of military force in Europe.  Last week, the International Criminal Court (ICC), sitting at The Hague, Netherlands, announced the Prosecutor, Fatou Bensouda, announced she had concluded her preliminary examination of the situation in Ukraine and found “… my office has concluded that there is a reasonable basis at this time to believe that a broad range of conduct constituting war crimes and crimes against humanity within the jurisdiction of the Court have been committed in the context of the situation in Ukraine.”

The following is the Official Statement issued by the International Criminal Court concerning the Situation in Ukraine: 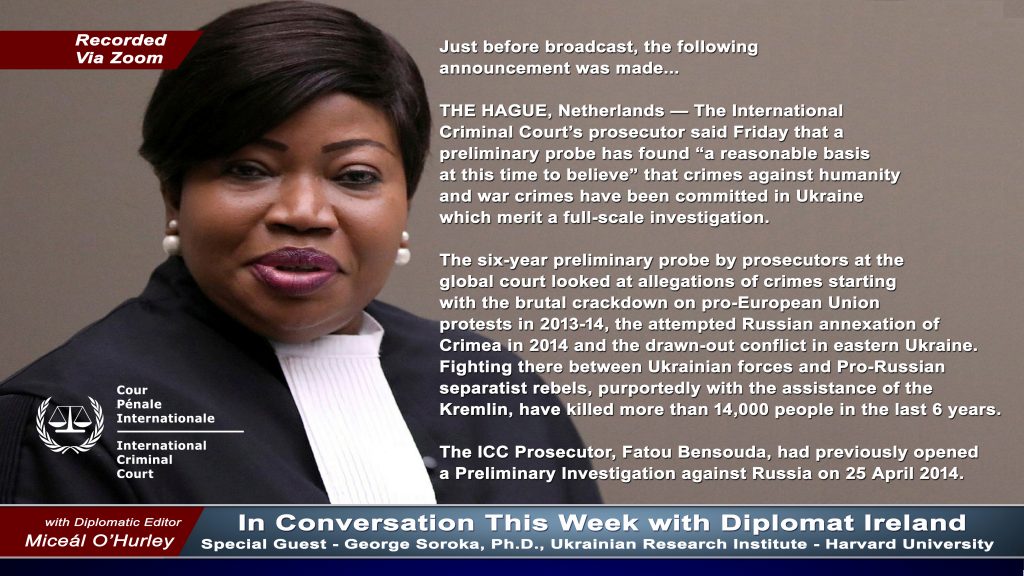 Today, I announce the conclusion of the preliminary examination in the situation in Ukraine.

As I stated last year at the annual Assembly of States Parties, as I approach the end of my term as Prosecutor  of the International Criminal Court (“ICC” or the “Court”), it is my intention to reach determinations with respect to all files that have been under preliminary examination under my tenure, as far as I am able. In that statement, I also indicated the high likelihood that several preliminary examinations would progress to the investigative stage. Following a thorough and independent process, I can announce today that the statutory criteria for opening investigations into the situation in Ukraine are met.

The preliminary examination of the situation in Ukraine was opened on 24 April 2014 on the basis of an initial ad hoc declaration lodged by the Government of Ukraine accepting the jurisdiction of the Court, which was subsequently extended by a second declaration by Ukraine, lodged in 2015, to encompass ongoing alleged crimes committed on the territory of Ukraine from 20 February 2014 onwards.

Specifically, and without prejudice to any other crimes which may be identified during the course of an investigation, my Office has concluded that there is a reasonable basis at this time to believe that a broad range of conduct constituting war crimes and crimes against humanity within the jurisdiction of the Court have been committed in the context of the situation in Ukraine. These findings, which will be spelled out in more detail in our annual Report on Preliminary Examination Activities, include three broad clusters of victimisation: (i) crimes committed in the context of the conduct of hostilities; (ii) crimes committed during detentions; and (iii) crimes committed in Crimea. My Office furthermore found that these crimes, committed by the different parties to the conflict, were also sufficiently grave to warrant investigation by my Office, both in quantitative and qualitative terms.

Throughout the preliminary examination, my Office has benefitted from the cooperative engagement of the Ukrainian authorities, including the provision of detailed information on investigations and judicial proceedings at the national level with regard to crimes of relevance to ICC jurisdiction initiated by the national authorities in relation to alleged crimes by all parties to the conflict. Information available regarding national proceedings relevant to the situation in Ukraine initiated by the Russian Federation has also been considered in our assessment.

Having examined the information available, despite the existence of information on domestic proceedings, my Office has concluded that the potential cases that would likely arise from an investigation into the situation in Ukraine would be admissible. This is because the competent authorities in Ukraine and/or the Russian Federation are either inactive in relation to the categories of persons and conduct that the Office has identified, or because the national judicial system is ‘unavailable’ in territory under the control of the opposing party, rendering the competent authorities unable genuinely to obtain the accused or the necessary evidence and testimony or otherwise to carry out their proceedings.

Moving forward, the next step will be to request authorisation from the Judges of the Pre-Trial Chamber of the Court to open investigations. The Office faces a situation where several preliminary examinations have reached or are approaching the same stage, at a time when we remain gripped by operational challenges brought on by the COVID-19 pandemic, on the one hand, and by the limitations of our operational capacity due to thin and overextended resources, on the other. This is also occurring in the context of the pressures the pandemic is placing on the global economy. Against this backdrop, in the immediate period ahead, we will need to take several strategic and operational decisions on the prioritisation of the Office’s workload, which also duly take into account the legitimate expectations of victims and affected communities as well as other stakeholders. This is a matter that I will also  discuss with the incoming Prosecutor, once elected, as part of the transition discussions I intend to have.  In the interim, my Office will continue to take the necessary measures to ensure the integrity of future investigations in relation to the situation in Ukraine.

The predicament we are confronted with due to capacity constraints underscores the clear mismatch between the resources afforded to my Office and the ever growing demands placed upon it. It is a situation that requires not only prioritisation on behalf of the Office, to which we remain firmly committed, but also open and frank discussions with the Assembly of States Parties, and other stakeholders of the Rome Statute system, on the real resource needs of my Office in order to effectively execute its statutory mandate.

As we move towards the next steps concerning the situation in Ukraine, I count on the full support of the Ukrainian authorities, and equally, I invite the cooperation of all parties to the conflict.

I also recall the Court’s much needed support from the Assembly of States Parties more generally. And as we look ahead to future investigations in the independent and impartial exercise of our mandate, I also look forward to a constructive and collaborative exchange with the Government of Ukraine and, it is my hope, with the Government of the Russian Federation, to determine how justice may best be served under the shared framework of complementary domestic and international action.

The Office of the Prosecutor of the ICC conducts independent and impartial preliminary examinations, investigations and prosecutions of the crime of genocide, crimes against humanity, war crimes and the crime of aggression. Since 2003, the Office has been conducting investigations in multiple situations within the ICC’s jurisdiction, namely in Uganda; the Democratic Republic of the Congo; Darfur, Sudan; the Central African Republic (two distinct situations); Kenya; Libya; Côte d’Ivoire; Mali; Georgia, Burundi Bangladesh/Myanmar and Afghanistan (subject to a pending article 18 deferral request). The Office is also currently conducting preliminary examinations relating to the situations in Bolivia; Colombia; Guinea; the Philippines; and Venezuela (I and II), while the situation in Palestine is pending a judicial ruling.

For further details on “preliminary examinations” and “situations and cases” before the Court, click here, and here.

Source : Office of the Prosecutor