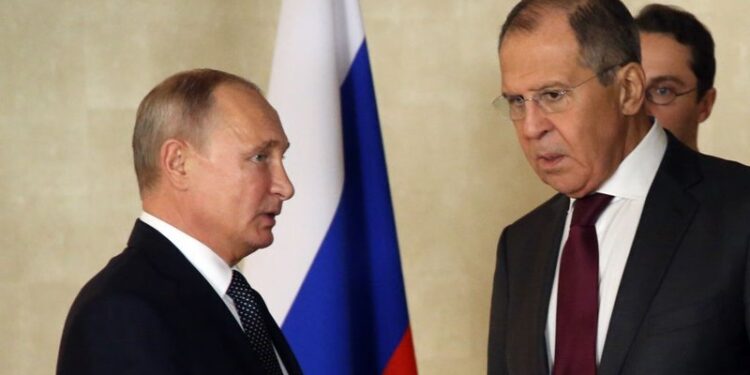 DUBLIN — The Russian Federation President, Vladimir Putin is, by all accounts, an honest man whose word is his guarantee.  I believe him when he says he has “no intention of occupying Ukraine“.

Putin told us that he felt the collapse of the Soviet Union was a “tragic mistake” that left millions of Russians beyond the Kremlin’s “control”.   In this oft repeatedly statement (if not complaint) Putin let the world know that he believed Estonians, Lithuanians, Latvians, Georgians, Ukrainians… to be “Russian”.  Admittedly, Putin views these peoples to be ‘minor Russians’, descendants of the same tree, albeit without the “purity” of those who have always remained in the ‘Motherland’ (is this starting to sound like another historical authoritarian in our not too distant European past?).

And despite treating these peoples from the Baltics to the Steppes; and, from the Urals to Siberia as ‘lesser-equals,’ to Putin they were still Russians at heart.  Unsurprisingly, he and his Foreign Minister, Sergeĭ Lavrov, refer to them with great frequency as “orphans.” And, like the orphans of any Dickens novel, they should, nay, must be deprived of their agency and “controlled”.  In the eyes of Putin, these ‘lesser Russians’ are simply incapable of surviving on their own (clearly, the economic, democratic, social, lingual and multilateral success of these ‘minor Russians‘ is, to Putin, a mirage).

So, when I say Putin’s word is his guarantee – I am not referring to the transactional promises he makes with quicksand-like reasoning and a partiality for Houdini-like escapism but the words he has spoken repeatedly over the last 22-years about his goals of creating a neo-Russian Empire by which Russia, the United States and China would divide the world into 3-spheres of influence.  Putin told us what he would do in his autobiography.  Still, we convinced ourselves it wasn’t real but the mere tool of a clever politician appealing to the easily fooled hoi polloi that forms his domestic, political base.

And, even if we discounted his biography or the multitude of public statements through the years in order to convince ourselves he was a rational actor (or, as Donald Trump put it this week, “a pure genius,” an endorsement that even Putin didn’t want), it is inescapable that Putin told us the truth about his ambitions in last summer’s essay.  Putin has made no secret of his contempt for the West.  Nor has he withheld the repeated tales of his personal umbrage at the fall of the Soviet Union.  Neither has Putin hidden his plans to re-absorb former Soviet Republics and Warsaw Pact countries under this direct influence and control.  His word, it must be admitted, was a guarantee he kept to his people – even if the West should have heeded them as warnings if not threats.

Since yesterday, the European security architecture, first built during the cold war, then reconfigured in the 1990s, has been proven impotent in stopping the very thing for which it was erected – protecting Europe.  But here too the fault is not martial alone – it has equally been a political dereliction.  The European Union’s failure to  embrace enlargement and instead opting for the nether-world that is the Eastern Partnership or erecting the loosely defined ‘proximity policy’ has contributed to the high-risk exposure for those nations at the periphery of the union, but made the EU itself vulnerable.  And Ukraine played no small role in the debacle in which it finds itself – not for its desire to join NATO after Russia’s 2014 invasion – but for having become too comfortable with the belief that they were ‘special’ and reforms were not really necessary.  Europe’s lack of embrace and Ukraine’s rejection of reform created a lethal environment in which Putin undermined each to his and Russia’s benefit.

Today, Russia’s existential threat to European stability, values, democracy and the rule of law are not defined by the geographical Europe that includes Ukraine (and Georgia) but by a Europe defined by an exclusive membership club.  The EU has been forced to confront its fears.  The EaP and proximity policy, designed to create a buffer between the EU and Russia has now all but disappeared in the twilight the last 2-days.

Whether or not Ukraine can sustain itself until Europe realises the errors of its ways and figures out a way to save this ancient nation from disappearing under the modern Stalinist regime Putin has created is anyone’s guess.  One thing, however, is certain — Putin’s word has proven to be his guarantee which means Georgia, Moldova, the Baltics, if not Poland, will be his next targets.

History is abundantly instructive in this regard.  Ukraine has long warned of this day coming and serving as an ‘Ides of March‘ moment.  Yet political leaders across Europe, born to the purple, arrogant, haughty and dismissive, have brushed aside Ukrainian soothsayers and instructed the litter bearers to speed-on to the forum.  More than 200 years ago, Edward Gibbon reminded us in his seminal work, The Decline and Fall of the Roman Empire, great nations do not fall overnight or because a battle, or even a war is lost.  They die by increments from having ignored reality and failed to act decisively while there was still time to shirk-off the errors of their ways.

It is still not too late.  The economic sanctions now being imposed should have fallen on Putin and his cronies after the invasion of Georgia’s Abkhazia and Tskhinvali regions, or after their occupation of Crimea, Luhansk and Donetsk.  They will take time.  We must find real and tangible way to help defend Ukraine today.  Ukraine cannot be sacrificed.  It must be saved and saved now lest Europe itself will die a slow death like a leper whose appendages fall away, bit-by-bit, until the body, once beautiful and desirable devolves into a pitiful, unrecognisable, hideous creature that makes everyone turn away in disgust as its very life force ebbs away slowly, but surely, day by day until it is no more.

Putin should be taken at his word when he claims he has “No intention of occupying Ukraine“.  After all, he has told us numerous times, “Ukraine doesn’t exist.  Its not a real country” and we all know, you can’t occupy what isn’t real.  Putin believes Ukraine is Russia and this is as much of a word-game for him as his threat of a “military-technical” solution.  He might have well followed his friend, Donald Trump as said, ‘Covfeffe‘.

Kyiv Under Attack – Reports from the Front