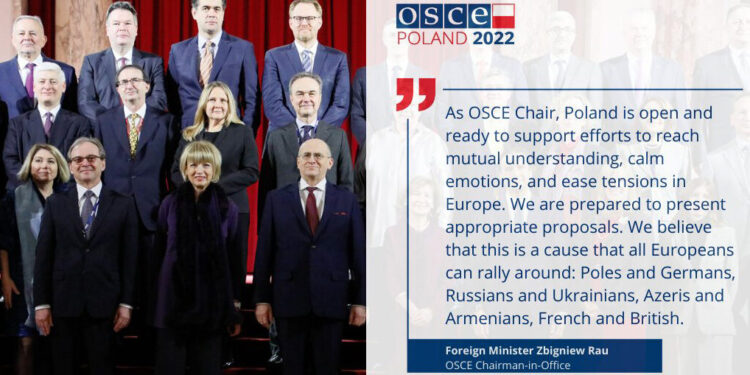 VIENNA — Mr. Paweł Kotowski was our special guest on the latest episode of ‘In Conversation This Week with Miceál O’Hurley’.  Kotowski, who serves as Plenipotentiary of the Minister of Foreign Affairs for Poland’s 2022 OSCE Chairmanship and Head of the Task Force, addressed Poland’s priorities for the Chairmanship of the OSCE and discussed the current security climate throughout Europe.

According to Kotowski, Poland’s Chairmanship of the OSCE in 2022 intends to promote and advance the rational, smart and flexible use of the OSCE’s unique tools and negotiation formats.  On 13 January 2022, addressing Poland’s priorities, OSCE Chairman-in-Office, Minister of  Minister of Foreign Affairs of Poland Zbigniew Rau told the Permanent Council in Vienna, “We need to reinvigorate the debate about European security. Let us start a process that will help us to uphold the Helsinki principles in full conformity with international law”.

The Chairman-in-Office, stressing Poland’s Chairmanship core approach, said:  “We do not always have to be faced with negative scenarios as long as we recommit our work and our priorities to the United Nations and Helsinki founding principles, which are universal and irreplaceable”.

Rau has used the OSCE Chairmanship to underscore the need to pay special attention to improving the security situation in the OSCE area, particularly by contributing to finding peaceful solutions to regional and protracted conflicts.  “It is time to put humanitarian consideration into the centre of our attention. Behind every protracted conflict there are people that suffer the most,” said Rau.   Mr. Rau’s OSCE Chairperson-in-Office address to the Permanent Council, on 13 January 2022 can be viewed in its entirety online.

Poland’s laedership in the OSCE comes at a critical time for Europe.  Belarus began threatening the EU’s Eastern border with Poland last year by weaponising migrants to attempt to cross into the EU as a means of attempting to destabilise Europe and create intra-EU tensions.  Diplomacy in Ireland – European Diplomat covered this story with an exclusive interview with Poland’s Ambassador to Ireland, Her Excellency Ms. Anna Sochańska on ‘In Conversation this Week with Miceál O’Hurley’, on 19 November 2021.  Simultaneously, the Russian Federation renewed its build-up of combat forces along the Ukrainian border and in December, made a series of demands that included a binding pledge by NATO not to admit Ukraine as a member and roll-back NATO membership to 1997 levels prior to former Soviet Republics were admitted to the voluntary alliance.

Vladamir Putin’s build-up of combat forces threatening Ukraine has included now Russia essentially re-occupying Belarus under the guise of “exercises“.  The move, which not only raises concerns over an invasion of Ukraine, but moves Russian Federation combat forces far closer to NATO along Poland’s 418km border with Belarus; Lithuania’s 679km border with Belarus; and, Latvia’s 173km border, stands in sharp contrast to Putin’s rhetoric.  Despite a steady propaganda mantra that NATO is “advancing on Russia,” it is NATO which is actually being encroached upon by the Russian Federation.  NATO remains a defensive association for the defense of Europe and unlike the Russian Federation, NATO has not invaded or illegally occupied any countries.  The Russian-driven deterioration of European security set in motion by its escalation of troops threatening an invasion of Ukraine and now Poland, Latvia and Lithuania is reflected in the OSCE Special Monitoring Mission (SMM) to Ukraine daily reports issued from Kyiv.

According to Kotowski, Poland will use the Chairmanship to emphasise the OSCE’s need to support societies in conflict areas, with special attention to vulnerable groups.  In addition to human rights and other core commitments of the Helsinki Final Act (1975), the OSCE will be addressing “confidence building measures” to promote universal security throughout the OSCE and address key issues such as energy diversification and multilateral communications to improve the security climate across Europe.

Paweł Kotowski assumed the position of Deputy Director of the Department of Economic Cooperation at the Polish Ministry of Foreign Affairs in September 2021. Between 2017 – 2021 he served as Deputy Chief of Mission at the Embassy of the Republic of Poland in Washington DC Previously he was a member of the policy planning staff (Department of Foreign Policy Strategy) at the MFA.  His portfolio included transatlantic relations, European and transatlantic security, US foreign policy and energy security.

A career diplomat, he served in various positions at the Polish diplomatic mission in Washington DC between 2000-2004 and 2006-2012 (chief of the Political Department).  In 2004-2006 he served as US desk officer in the MFA’s Department of the Americas. An alumnus of the GMF Marshall Memorial Fellowship program of 1999.  A graduate from Maria Curie-Skłodowska University in Lublin and The National School of Public Administration in Warsaw, he joined the diplomatic service in 1998.  Paweł Kotowski is fluent in English, French and Polish (mother tongue).

Stand with Belarus – Day of Solidarity

Stand with Belarus - Day of Solidarity