A Special 3-Part Series by Diplomacy in Ireland – European Diplomat 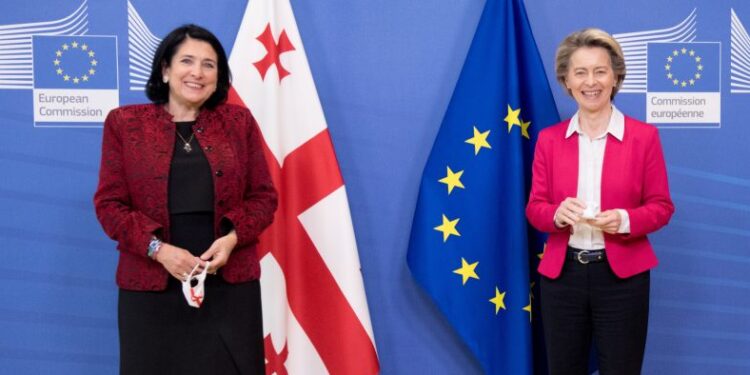 TBILISI — Today, scholars argue that little did the ‘Inner Six’ nations realise when they signed the Treaty of Paris in 1951 that their economic experiment would evolve into a social compact that now encompasses some 27 Member States spread over a non-contiguous 4,233,255.3 kilometres.  The collaboration of Belgium, France, Italy, Luxembourg, the Netherlands and West Germany was rooted in a history of shared European culture but one marked by continual warfare on a devastating scale.  Economic collaboration was not only critical to their union following post-war rebuilding, but was believed by them to be an instrument to avoid future military conflicts.

Nations that had been at war, or were economic and political competitors only a few years before, found collaboration promised a better path for their future.  At the time of their compact, each suffered significant domestic disruption, the lingering aftermath of two World Wars.  Accepting that none were perfect, aach were able to temper their expectations with the reality that the union which they were building would be of mutual benefit, even if achieved by an uncertain path.  It was their collective belief that economic stability and interdependence would provide a basis for stabilising the heavily bruised continent.  Such was the birth of the bold experiment in cooperation and democratic action that laid the foundation for the modern Europe enjoyed by some 447.7 million people today.

And yet while many acclaim this to be this birth of what we now know to be the European Union (EU), its roots predate the European Coal and Steel Community (ECSC).  Far from today’s historical-financial dogmatics, the EU’s true genesis can be traced to the inter-war period’s pan-Europa movement which was significantly more influenced by culture and values than economics.

The Pan-Europa movement that was the wellspring of today’s EU were largely the gift of a Austrian-Japanese aristocrat, politician and philosopher.  Richard von Coudenhove-Kalergi, who traced his family lineage back to the Hellenic Byzantine Emperors, provided in his 1923 exegesis, Pan Europa, a visionary masterpiece in arguing for a beneficial compact of the entirety of Europe.

A friend and collaborator with contemporaries the like of  Engelbert Dollfuss, Kurt Schuschnigg, Otto von Habsburg, Winston Churchill, Albert Einstein, Sigmund Freud and Charles de Gaulle, von Coudenhove-Kalergi’s vision of Europe remains the singularly most influential movement of European multilateral cooperation since the Treaty of London (1518).  There is a reason his epitaph reads, “Pionnier des États-Unis d’Europe”.  Indeed, the EU’s anthem, Ode to Joy, was proposed by von Coudenhove-Kalergi almost 30-years before its formal adoption.

For Pan-Europists, who gave modernity its collaborative and social values imbued in EU policy, any compact’s achievements would remain incomplete until all of Europe participated in the compact.  This appeal to the universality of a Pan-European union was merely a goal – it was by their thinking an values a functional if not moral necessity.  And yet today, the EU seems to suffer from a sort-of schizophrenia evidenced by its contradictory and self-defeating inclusion/exclusion views most recently voiced in its European Neighbourhood Policy and the creation of new hybrids that offer neither membership or close the door to accession.  The resulting uncertainty has had a deleterious impact on the European psyche as much as navel-gazing at a Central Bank’s interest rate policies create irrational market fluctuations that drive markets crazy and suppress investment.

It may be time for the EU to take a page from another body of European intellectual elites, the Jesuits.  Jesuit spirituality calls for a ‘Daily Examen,’ a critical self-examination and reflection about personal choices, conduct and philosophical adherence that has seemingly been devoid from the EU for years.  The successive demands upon the EU by successive financial crisis, refugee and border issues, various nations drifting from the hymn-sheet of EU conformity (especially in the area of judicial administration and independence) and dealing with climate change and the energy dependency that has left the EU helpless in the face of invasions, occupations and renewed threats by Russia, have distracted the EU from its core mission – uniting all of Europe for its own security, stability and prosperity.  Nowhere is this more noticeable than in the area of European Enlargement – the nomenclature for the process of bringing new States into EU Membership.

Today, there is an over-focus on the economic foundations of the EU in the Treaty of Paris (1951) and the subsequent Treaty of Rome (1957) upon which the  European Economic Community (EEC) was erected.  At their core, these remain primarily economic mechanisms, devoid of the language of values.  Admittedly, these seminal achievements go hand-in-glove with the Pan Europists values of peace and prosperity, but they lack the fundamental raison d’etre for which the EU was erected – to lift the entirety of Europe out of chaos and disarray by a universal embrace of stability and mutuality of values.

Admittedly, the EU should be inordinately proud of the achievements made by the creation of a single, internal market.  This is also true of the incredibly important creation of a standardised legal code to support the union – an accomplishment which would even impress Justinian.  Regardless, the EU  must come to a reckoning with the reality that its policies of late have had a propensity to insulate itself from any discomfort caused by growth (a discomfort the EU was once more than willing to endure to achieve its ultimate goal of universal Pan-European compact) and it has done so under the guise of ‘expansion fatigue’.

This resort to citing ‘expansion fatigue’ stands at odds with the Pan-Europa philosophy and vision which drove the EU’s founders and created the union.  In its infancy, the zeal which drove the union was the comprehensive participation of the entirety of Europe and a stagnation, deferral or loss of that goal would have been, and should today be considered a failure.  The question is then, “Why is the EU today willing to divest itself of its core and most sacred foundational value, inclusivity”?

This is the question that must be asked and examined before any contemplation of Georgia’s 2024 EU Membership aspirations can be discussed.

The next instalment of this 3-part series examining Georgia’s 2024 EU Membership Aspirations in Focus will appear on Thursday, 17 February 2022.

Delusions and Destiny – Inside the Dark Mind of Vladimir Putin

Delusions and Destiny - Inside the Dark Mind of Vladimir Putin