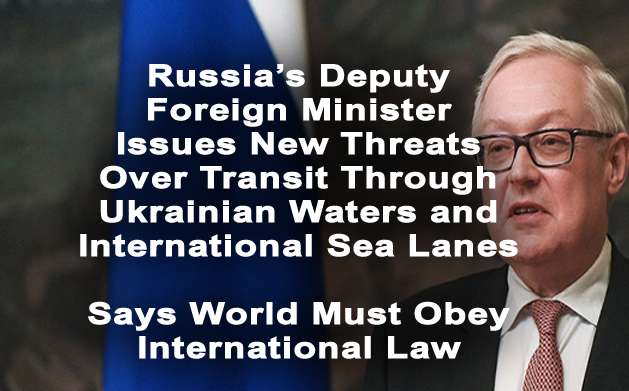 MOSCOW – Following a maritime challenge by Russia to HMS Defender which two days ago transited through Ukrainian and international waters, Russia’s famously combative Deputy Foreign Minister, Sergei Ryabkov, let loose a new round of invective language that marks a continued, unilateral escalation of hostilities between Russia and the international community over free navigation of international waters and transit through internationally recognised Ukrainian waters.

Speaking to the TASS News Agency, Ryabkov issued a stark warning that Moscow would “stand guard” over its borders and would resort to ordering its military to “bomb” any vessel that does not strictly obey Russian commands at sea.

Despite international law, and the non-recognition of Russia’s attempt to annex Crimea in 2014 by the United Nations and European Union (including Ireland), Russia continues to attempt to assert control over Ukraine’s territorial waters off Crimea and control Black Sea shipping lanes by acts of force and intimidation.

In one of the most repugnant resorts to the adherence to the rule of law, Ryabkov is quoted as claiming Russia to be a victim of border incursions, saying, “What can we do? We can appeal to common sense, demand respect for international law.  If this does not help, we can bomb not only in the direction, but also on target, if our colleagues do not understand.”  Ryabkov made his statement to TASS New Agency.

Ryabkov claiming the high-ground by asking the world community observe ‘international law’ when Russia has notoriously  violated international law by invading and attempting to annex Ukrainian territory, committing human rights abuses and engaged in extra-judicial murders and disappearances in Crimea and Eastern Ukraine, that are now the subject of investigation by the International Criminal Court, and judicial findings of its violations of the International Law of the Sea (ITLOS) cannot be considered anything but sui generis.

One NATO nation’s Ambassador, not authorised to speak on-the-record about recent events, told Diplomacy in Ireland – The European Diplomat about the growing concern in diplomatic circles over the “… disconnected world-view now daily espoused by the Russian diplomatic corps that is making  finding common-ground challenging”.  He continued, “ It is increasingly difficult, if not impossible, to approach any subject with reliability when Moscow redefines reality to suit their own purposes.  When they claim they will shoot,” he continued, “it is the one thing we can all agree on.  Russia has demonstrated an alacrity for using violence, or the threat of violence, to get their way in Europe.  We should all be alarmed.”

Moscow summoned the British Ambassador for an urgent démarche following the HMS Defender passage through internationally recognised Ukrainian and international waters.  Following the meeting, where Russia asserted their un-recognised claim to the region, a Kremlin spokesman described HMS Defender’s transit through the sea lanes as, “a deliberate and premeditated provocation”.  Putin’s Press Secretary, Dmitry Peskov, imparted a further belligerent, “In the event of a repeat of unacceptable provocative action – if those actions go too far, no options can be ruled out in terms of legally defending Russia’s borders”.  As Peskov’s warning was issued not by the Russian Ministry of Foreign Affairs, but personally by the President’s own Press Secretary, it is presumed to convey Putin’s official position.