Yevhen Burdin Speaks with Miceal O'Hurley for 'In Conversation This Week' 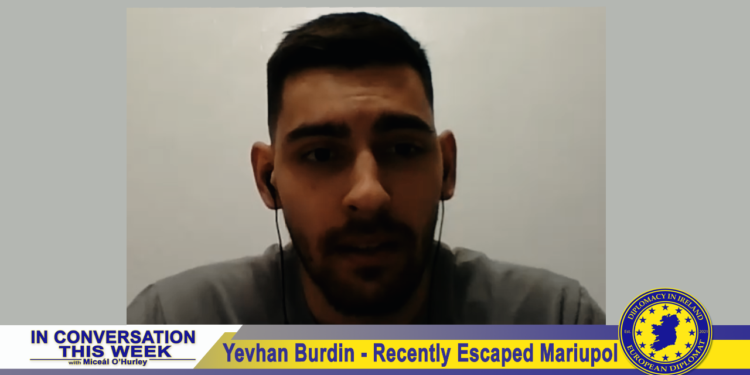 CHERNIVTSI — The siege of Mariupol has been marked by brutality on a scale not seen in Europe since the fighting in Srebrenica in 1995.  Just before this ancient seaport fell to Russian occupiers on 28 March Mariupol’s Mayor, Vadym Boichenko, reported that 90% of the city’s buildings had been severely damaged, 40% of them reduced to rubble and more than 5,000 civilians were dead.  The number of dead is estimated to be significantly higher as sporadic fighting continues in the city and Russian occupation forces are prohibiting civil authorities from searching through the destroyed buildings for any signs of survivors or the recovery of the dead.   Mariupol’s profile was elevated in the international media when Russian bombers destroyed the Muriupol Drama Theatre in which some 1,000 persons had fled for safety.  The building, which suffered several direct hits, was marked with bright, white paint with the message “CHILDREN” to ensure Russian bombers would avoid striking the building.  The warning was in vain.  Dozens of children’s strollers and prams photographed outside the theatre signaled the number of children who were killed or trapped inside.

Mr. Yevgen Burdin, a native of Mariupol who had been living in Kyiv for the past several years, had returned to Mariupol with his wife and 9-month old child for family holidays just before Russia expanded their war on Ukraine on the 24th of February.  He recounts for Diplomacy in Ireland – European Diplomat his experiences from the outset of the combat to his family narrowly escaping death when their home was destroyed a Russian bombing campaign and their escape to the relative safety of Chernivtsi in Western Ukraine.