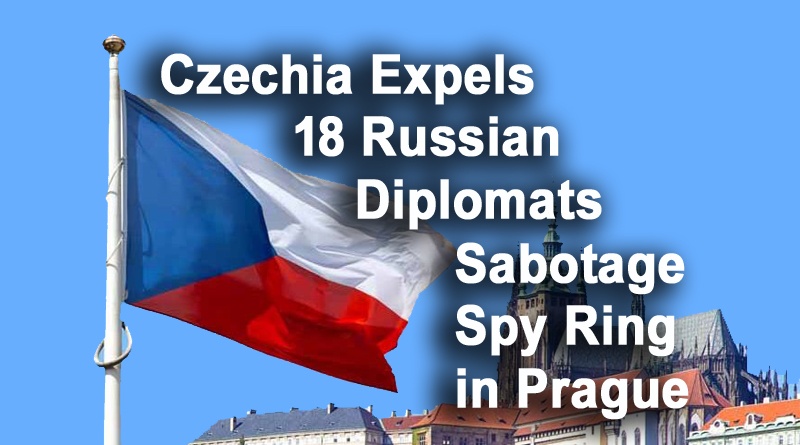 PRAGUE  – The Czechia Government has accused Russia of being responsible for the 2014 destruction of a munitions depot.  Czechian Prime Minister Andrej Babis announced at a surprise press conference on Saturday, 17 April 2021, that Czechia (Czech Republic) Intelligence System (IS) found “unequivocal evidence” proving Russian military agents were responsible for the sabotage.  Prime Minister Babis announced that the Czech Republic would be expelling 18 Russian diplomats whom IS claims have been “clearly” identified as spies.  Those Russian diplomats declared persona non grata were given 48-hours to leave the country.

Prime Minister Babis also signaled the strength of the information upon which Russia stands accused by publicly noting that Czechia President Milos Zeman, notorious for his fervant pro-Russian views, which puts him out-of-step with the Government, was briefed about the situation and notably “expressed absolute support for us.”  Czechia has been a North Atlantic Treaty Organisation (NATO) member since 1999.

The destruction of the ammunition depot from a massive explosion occurred in the town of Vrbetice on 16 October 2014.  The secure munitions depot stored 50 metric tons of military grade munitions.  A month-and-a-half later, 3 December, a second explosion destroyed an additional 13 metric tons of ammunition at the same facility.

EU Member Czechia has long been a target of Russian subterfuge.  In the latest twist of affairs, Interior Minister Jan Hamacek indicated Czechia was prepared for Russian backlash, saying, “We’re in a similar situation to Britain in the attempted poisoning case in Salisbury in 2018….  I’m very saddened that the Czech-Russian relations are going to suffer such significant damage, but the Czech Republic must respond,” Hamacek said.  Czechia has formally notified the EU and North Atlantic Treaty Organization (NATO) and is expected to have their support.

In the aftermath of the Salisbury poisonings carried out by two Russian intelligence officers Great Britain and other countries throughout the EU and the world expelled Russian diplomats.  Great Britain credibly accused Russian SVR and GRU operatives Anatoliy Vladimirovich Chepiga and Alexander Yevgenyevich Mishkin for entering the country on falsified passports and carrying out a attempted assassination on Sergei Skripal and his daughter, Yulia, using the banned chemical weapon Novichok.  Later, an innocent bystander, Dawn Sturgess, died from accidentally coming into the bottle containing Novichok discarded by the Russian assassins.  Interpol maintains arrest warrants for the pair.

In what appears as clumsy spycraft, the covert operations names of the two Russians accused of attempting to assassinate Skripal were used in munitions depot sabotage in Czechia.  According to IS, the very suspects in the munitions depot explosions used  passports under the names of Ruslan Boshirov and Alexander Petrov – the very covert operations names used by Chepiga and Mishkin in the Skripal assassination attempt.  It remains uncertain at this time if Chepiga and Miskin were involved in the Czechia sabotage or if the passport names were simply recycled for other Russian operatives.

Moscow outright rejected Czechia’s allegations of Russian responsibility for the sabotage.  In a move that has become almost wrote over the past decade, Russia not only rejected any proof of responsibility for their bad acts but in-turn threatened retaliatory expulsion of diplomats in a tit-for-tat exchange.  “We are expressing our firm protest to the Czech authorities,” according to a Russian Foreign Ministry statement released today. “Our response will force the people behind these provocations to feel the full responsibility for their departure from the foundations of normal relations between our countries.”

Czechia’s expulsion of 18 Russian diplomats, identified as spies operating from their Embassy in Prague, comes close on the heels of the EU taking actions against Russia for their bellicose build-up of Russian combat forces on the border of Ukraine as well as their imprisonment of Russian opposition leader Alexei Navalny following Russia’s attempt to assassinate him using the same Novichok agent deployed against Skripal.

EU Foreign Ministers are expected to take up the issue of the Czechia announcement of the expulsion of Russian diplomats during their scheduled meeting of 19 April 2021.