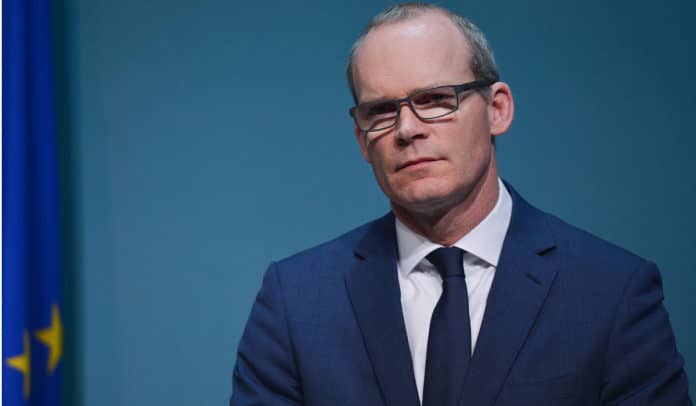 DUBLIN — Israel has issued an open tender for the construction of more than 1,200 new settlement housing units in occupied East Jerusalem causing outrage in the international community and in Ireland.  Speaking on the topic, Minister for Foreign Affairs Simon Coveney, T.D. stated, “I condemn the decision by Israeli authorities to open a tender for construction of a new settlement of over 1,200 housing units in Givat Hamatos in occupied East Jerusalem.  Senior officials in my Department met the Israeli Ambassador today to underline Ireland’s serious concerns at the expansion of settlements in this strategically sensitive area between Jerusalem and Bethlehem.”

Foreign Affairs Minister Coveney Condemns Israeli Plans as Undermining Two State Solution
Minister Coveney conveyed the Irish Government’s position on the illegality of Israel’s conduct, “This announcement by Israel undermines the viability and territorial contiguity of a future Palestinian State and the possibility of a negotiated two-state solution in line with the internationally agreed parameters with Jerusalem as the future capital of two states.  Settlement activity in the occupied Palestinian territory is clearly illegal under international law.  This action erodes trust and confidence between the parties, which is critical for the resumption of meaningful negotiations.  We are again at a very sensitive time, when maximum restraint must be shown by all sides.  I call upon the Israeli government to reverse this decision and to halt all settlement construction.”
The fresh steps by the Israeli government defy the United Nations, EU and international law.  United Nations Security Council Resolution 2334
of 2016 states that Israel’s settlement activity constitutes a “flagrant violation” of international law and has “no legal validity“.  It has been the long-term position of the United Nations that Israel stop such activity and fulfill its obligations as an occupying power under the Fourth Geneva Convention.

The Anti-Defamation League disagrees, asserting that the statement that “settlements are a violation of international law” is inaccurate, and providing settlers with a list of responses for maintaining that they do not violate those laws.  Israel’s Highest Courts have also rejected a strict application of the Fourth Geneva Convention to their settlement activities.

The official Israeli legal argument against the application the Fourth Geneva Convention in the West Bank is based on a 1971 interpretation by Israeli Attorney-General, Meir Shamgar.  Shamgar, in his capacity as Israel’s Military Attorney General in the early 1960s, prior to becoming Attorney General, had created legal textbooks and military kits for the Israeli Defense Forces to cope with a situation where they might be perceived in international law as being an “occupying power.”  His view was presented by Moshe Dayan in a speech before the 32nd session of the United Nations General Assembly in 1977.

Shamgar believed that the Convention did not pertain to the territories captured by Israel since they had not previously been recognised as part of a “Sovereign State” and could not be considered “the territory of a High Contracting Party“.  Shamgar claimed, “There is no rule of international law according to which the Fourth Convention applies in each and every armed conflict whatever the status of the parties…. The whole idea of the restriction of military government powers is based on the assumption that there has been a sovereign who was ousted and that he was a legitimate sovereign. Any other conception would lead to the conclusion, for example, that France should have acted in Alsace-Lorraine according to rule 42–56 of the Hague Rules of 1907, until the signing of a peace treaty.”

The Israeli legal argument advanced by Shamgar and Israel was dismissed by the International Court of Justice. The Court cited the Geneva Convention’s travaux préparatoires, which recommended that the conventions be applicable to any armed conflict “whether [it] is or is not recognized as a state of war by the parties” and “in cases of occupation of territories in the absence of any state of war” as confirmation that the drafters of the article had no intention of restricting the scope of its application.

The Non-Aligned Movement, a forum of 120 developing world states that are not formally aligned with or against any major power bloc, declared in 2003 Israeli settlements as illegal, stating, “the main danger to the realization of the national rights of the Palestinian people and the achievement of a peaceful solution is the settler colonialism that has been carried out in the Occupied Palestinian Territory, including East Jerusalem, since 1967, through land confiscation, settlement building and the transfer of Israeli nationals to the Occupied Territory.”  The Organisation of Islamic Cooperation views settlements as “a blatant defiance of the international will, constitutes a flagrant violation of international law and relevant conventions, agreements and international legitimacy resolutions, and represents a manifest aggression on the rights of the Palestinian people to their land.”  Human rights organisations such as Amnesty International, Human Rights Watch and B’Tselem maintain that Israeli settlements violate international law.

The International Committee of the Red Cross in a declaration of December 2001 stated that “the ICRC has always affirmed the de jure applicability of the Fourth Geneva Convention to the territories occupied since 1967 by the state of Israel, including East Jerusalem“.

The United Nations General Assembly has affirmed the applicability of the Convention to the Palestinian Territories in many resolutions. The United Nations Security Council has taken the same view. Security Council Resolution 271 (1969) called upon “Israel scrupulously to observe the provisions of the Geneva Conventions and international law governing military occupation“. Security Council resolution 446 (1979) affirmed “once more that the Geneva Convention relative to the Protection of Civilian Persons in Time of War, of 12 August 1949, is applicable to the Arab territories occupied by Israel since 1967, including Jerusalem.”

Israel Encouraged by President Trump and Secretary of State Pompeo
This week, Secretary of State Mike Pompeo announced plans to visit the very Israeli settlements that have been declared illegal under international law and numerous UN and UNSC Resolutions. The Trump Administration broke with long-standing US policy by moving its Embassy to Jerusalem and closing the Palestinian Authority offices in Washington, D.C., acts which were deemed to encourage Israeli settlements and that undermine the viability of a Two State Solution.

Previously, President Trump proposed a ‘Peace Plan’ which was warmly embraced by Israel and wholly rejected by Palestinians.

The Plan, summarised by the White House in a media release, touted several points that the Trump Administration claimed would lead to a peaceful resolution of the Israel-Palestinian conflict while purportedly maintaining a Two State Solution, including::

“Pompeo’s decision to visit Israeli settlements in the occupied West Bank is a provocation to the Palestinian people and leadership,” Palestinian Authority spokesman Nabil Abu Rudeineh said in statements cited by the official Wafa news agency on Sunday.  Abu Rudeineh called Pompeo’s visit as “a blatant disregard to the resolutions of the international community on top of which is the UNSC resolution 2334.”

Statement by Minister of State for European Affairs, Thomas Byrne T.D. on Belarus