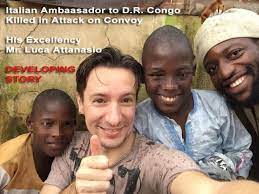 GOMA (D.R. Congo) – His Excellency Mr. Luca Attanasio, the Italian Ambassador to the Democratic Republic of Congo, was killed this morning after the convoy in which he was travelling came under fire in the North Kivu province.  Reports of his death were issued by the Italian Foreign Ministry.  The story is developing.

According to AP Reports, two other people were killed in the attack, including an Italian soldier.  Major Guillaume Djike, Army Spokesperson, did not further identify casualties.

Attack on the WFP Convoy
The UN World Food Programme (WFP) convoy was on a fact-finding mission in the country’s eastern provinces which have experienced significant troubles of late.  The attack occurred near the town of Kanyamahoro at approximately 10:15 a.m. local time (08:15 GMT).  According to a Spokesperson for Virunga National Park, the attack upon the convoy is believed to be part of a kidnapping attempt.

Ambassador Attanasio was reported to have “died of his wounds” according to a Government spokesperson in Kinshasa.

The Italian Foreign Ministry released a brief statement after learning of the attack, “The Ministry of Foreign Affairs confirms with great sorrow the death of Italian Ambassador to the Democratic Republic of the Congo Luca Attanasio and a carabineer in Goma today. The ambassador and the carabineer were moving in a vehicle of a convoy of the United Nations Organisation Stabilisation Mission in the Democratic Republic of the Congo,” the Ministry said in a communique.

North Kivu, where the attack upon the convoy took place, is a home province of the Allied Democratic Forces (ADF).  The ADF is a coalition of Islamists and other forces opposed to longtime Ugandan President Yoweri Museveni.  The ADF has been operational in the province since the late 1990s. In 2017, the group swore allegiance to the Islamic States.  The United Nations has cited the group as being responsible for killing hundreds of civilians.

Ambassador Attanasio – A Career of Caring Service
Born in Saronno, a town in the Lombardy Region northwest of Milan, in the province of Varese, Luca Attanasio was 43 years old. Ambassador Attanasio graduated from Bocconi in 2001 with a Masters in International Politics.  Prior to entering the Italian Foreign Service, he had a brief career in business consulting.  He began his diplomatic career in 2003.

Serving as the Head of the Economic and Commercial Office at the Italian Embassy in Bern (2006-2010), then Regent Consul General in Casablanca, Morocco (2010-2013), Ambassador Attanasio was known as a collegial person forging relationships with others in the diplomatic field as well as with locals.  In 2013, he returned to the Farnesina for an appointment as Head of the Secretariat of the Directorate General for Globalization and Global Affairs.  In 2015, he then returned to Africa as First Counselor at the Embassy of Italy in Abuja, Nigeria (2015).

In 2020, Ambassador Attanasio was awarded the Nassiriya International Peace Prize 2020.  His wife, Zakia Seddiki, was also a recipient of the award in her role as the President of a humanitarian organisation that assists homeless children.

Ambassador Attanasio’s wife, Zakia Seddiki, is a native of Morocco.  is the President of MAMA SOFIA (mamasofia.org) an NGO founded in Kinshasa in 2017.  MAMA SOFIA is an organisation staffed by  Italian and international volunteers that aims to improve the lives of women and children in difficulty in the Democratic Republic of Congo.  MAMA SOFIA follows several projects in Congo (Kinshasa and Central Kongo) mainly in the health, education and access to water sectors, for the main benefit of the children.

There have been 247 recorded attacks upon Diplomatic Missions since records began in 1829, with a full 77 of those attacks (31%) occurring within the last decade.

Attempts to reach the Italian Embassy in Dublin and the Department of Foreign Affairs for comment prior to publication were not successful.  This is a Developing Story.