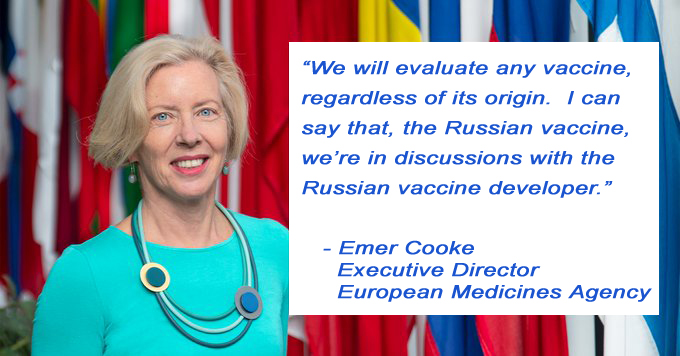 DUBLIN – In a surprising move late Friday, 16 January 2021, European Medicines Agency Executive Director Emer Cooke, herself Irish, commented during an open webinar [at 39:00], “We will evaluate any vaccine, regardless of its origin.  I can say that, the Russian vaccine, we’re in discussions with the Russian vaccine developer.  We’re very open to discussing and looking at the dossiers and hopefully evaluating them.  If they have a role in this pandemic, we want them to play that role.”   Attempts to verify the accuracy of the Ms. Cooke’s remarks and provide comment prior to publication went unanswered by the European Medicines Agency.

Ireland is currently rolling-out its comprehensive Covid-19 vaccination programme.  As of midnight on 13 January, the HSE had administered some 77,303 vaccine doses with 69,378 of them being frontline healthcare workers and 7,925 does in long term care facilities.  The Pfizer/BioNTech COVID-19 Vaccines began on 26 December 2020 from the first delivery of 10,000 doses received by the HSE.  Vaccinations initially took place at 4 hospitals across the country – St James’s Hospital and Beaumont Hospital in Dublin, Cork University Hospital, and University Hospital Galway.

In an Exclusive Interview with Miceal O’Hurley on 5 August 2020, Russian Federation Ambassador, His Excellency Mr. Yuriy Filatov spoke to Diplomacy in Ireland – The European Diplomat about being the first country to develop and administer a Covid-19 vaccine amongst vocal safety concerns, “Russia has consistently proposed to the international community to join the efforts in fighting the disease within the framework of wide international co-operation” said Ambassador Filatov.  “We do not view the anti-COVID vaccine research in terms of a “race” between different nations to be first on the market.  The effort is aimed to confront the disease early, under strict scientific and sanitary regulations, making sure that the new vaccine is safe, effective and available for as wide population as possible.”

Pharma giant Pfizer, which developed the COVID-19 Vaccine called ‘Comirnaty’ in cooperation with Germany’s BioNTech, received European Medicines Agency (EMA) and EC marketing authorisation for Comirnaty on 21 December 2020.  Pfizer and BioNTech announced a temporary cut-back in distribution of its vaccine in Europe.  Ireland is currently administered the Comirnaty vaccine with the Modern vaccine only beginning to be administered in the last 24 hours.

The planned reduction in production and supply, according to Pfizer/BioNTech, is temporary and necessary to upgrade its facilities to increase overall production capacity.  Germany’s Foreign Ministry expressed the sentiments of the EU community upon learning of the last-minute delay in production/shipping, “At short notice, the EU Commission and, via it, the EU member states, were informed that Pfizer [and BioNTech] would not be able to fully meet the already promised delivery volume for the next three to four weeks due to modifications at the Puurs plant,” a Ministry Spokesperson said.

Reacting to the breaking news from Dublin, Health Minister Stephen Donnelly made clear Ireland’s position, “We must make modifications to the process to boost productivity.”  According to the World Health Organisation (WHO), Ireland now has the world’s highest Covid-19 infection rate.  According to WHO data, it took Ireland 9 months to reach 80,000 Covid-19 cases.  However, after bowing to public frustration, Government eased restrictions over the Christmas period, pointedly against the advice of the Nphet working group, with the result that it only took 3 additional weeks to exceed 160,000 cases.  In all, Ireland moved from having one of the lowest infection rates in the world to the very highest in only the past 6 weeks.  According to the HSE and Nphet, twice as many Irish people are in hospital as were admitted in the first wave of the pandemic.

Last week reports emerged that Government was considering rationing ICU beds for “those with the greatest chance of survival.”  Daily new infection rates in the post-Christmas period have invariably ranged between 4,000-8,500 per day. The Irish Examiner reported on 12 January that Dr. Brian Carey, a consultant physician at Bantry General Hospital, issued a written notice to colleagues in the Bantry area warning they may have to make difficult decisions to treat patients in ICU who are the most likely to survive.  HSE Chief Executive Paul Reid gave a briefing on 13 January in which he indicated there were 1,792 patients in hospitals with Covid-19, 169 of whom are in ICU, down from the previous day of 172.  According to the HSE, during the first wave of the pandemic, the number of ICU admissions peaked at 160.  Of those in ICU at the time of the briefing, Reid indicated some 100 patients required ventilated support.  Red went on to say that the number of people in Irish hospitals was up 80% from the previous week.  To date, some 2,536 people have died from Covid-19 since the pandemic began with a 73,16 new cases in the first 2 weeks of January alone.

Government, however, points to Ireland having relatively high daily vaccination levels compared to other European countries.  As of January 14, 2021, the United Kingdom had the highest COVID-19 vaccination rate in Europe having administered 4.94 doses per 100 people in the country.  At the latest data, the Denmark had carried out 2.23 doses of the vaccine per 100 population, followed by Italy with a vaccination rate of 1.61 then Ireland at a rate of 1.57.  Being the first in Europe to approve a vaccine for widespread use, the UK began vaccinations using the Pfizer/BioNTech vaccine on 8 December 2020.

Consideration of the Russian made ‘Sputnik V’ vaccine (only one of several vaccines under development in Russia) comes on-foot of “evolving information” from the WHO and the National Immunisation Advisory Committee.  Russia, as reported by DiplomacyIreland.eu, has been administering the Sputnik V vaccine since August 2020, most notably with Russian Federation President Vladimir Putin stating his own daughter took the vaccine.  The head of Russia’s Sovereign Wealth Fund, Kirill Dmitriev, who was responsible for coordinating the development of Russia’s vaccine development, announced to Reuters news agency that Russia will submit a formal application to the European Union next month for approval of its Sputnik V coronavirus vaccine.  Peer-reviewed results of the vaccine are expected to be released shortly to demonstrate its “high efficacy” added Dmitriev.

Reached for comment by DiplomacyIreland.eu, a Press Secretary for the Embassy of the Russian Federation to Ireland provided the following statement, “We believe that the “Sputnik V” vaccine deserves the most serious attention.  It has proved its safety and effectiveness.  It is up to the EU and Irish authorities to decide on the scope and priorities of the vaccine policy. If there is an interest in “Sputnik V”, it is fair to say that it will be dealt with due consideration.”