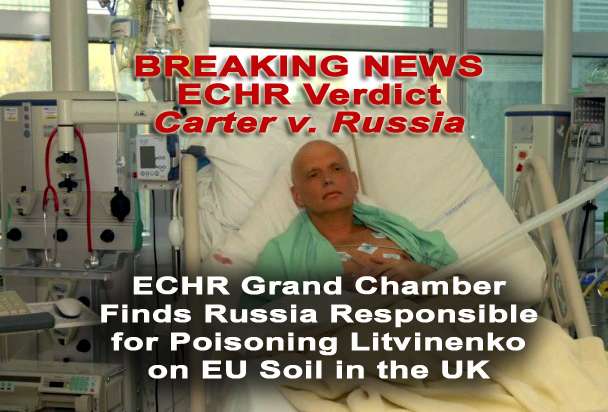 STRASBOURG – The Grand Chamber of the European Court of Human Rights (ECHR) issued a ruling this morning concluding, “Russia was responsible for assassination of Aleksandr Litvinenko in the UK.”

Alexander Litvinenko, a former Russia spy who became an outspoken critic of Vladamir Putin and the Kremlin died in London hospital in 2006.  He was found to have been poisoned with polonium, likely from tea he drank at a hotel in the company of two other Russians, themselves purported to be Russian spies.  The published ECHR ruling found that, “The Court found in particular that there was a strong prima facie case that, in poisoning Mr. Litvinenko, Mr. Lugovoi and Mr. Kovtun had been acting as agents of the Russian State.”

Russia has long denied any involvement in Litvinenko’s murder.

The case, Carter v. Russia (application no. 20914/07), began in May 2007, slowly grinding  its way through the courts until today’s decision was disseminated.  The case was brought by Litvinenko’s wife, Maria Anna Carter (Ms. Marina Anatolyevna Litvinenko).  She was represented by Christian and Khan, Solicitors, London.

In a damning decision, the Grand Chamber of the ECHR further ruled that Russian authorities, “…had not carried out an effective domestic investigation capable of leading to the establishment of the facts and, where appropriate, the identification and punishment of those responsible for the murder.”  The ECHR unanimously found that Russia failed to meet its obligations under Article 38 of the European Convention on Human Rights.

Russia is also suspected in numerous other murders of critics including the attempted murder of father and daughter Sergei and Yulia Skripal, the murder of Dawn Sturgess, the poisoning of Alexander Navalny and a multitude of others.

The BBC also reported this morning that Prosecutors have authorised charges against Denis Sergeev in the Novichok attack on former double agent Sergei Skripal and his daughter Yulia.  This bring to three the number of Russian’s that will be charged in this poisoning on what was then European Union soil before the United Kingdom engaged in ‘Brexit’.  United Kingdom police, investigating the matter, have confirmed they believe all three suspects belonged to a Russian military intelligence team that undertakes assassinations both domestically and internationally against Russia’s critics.