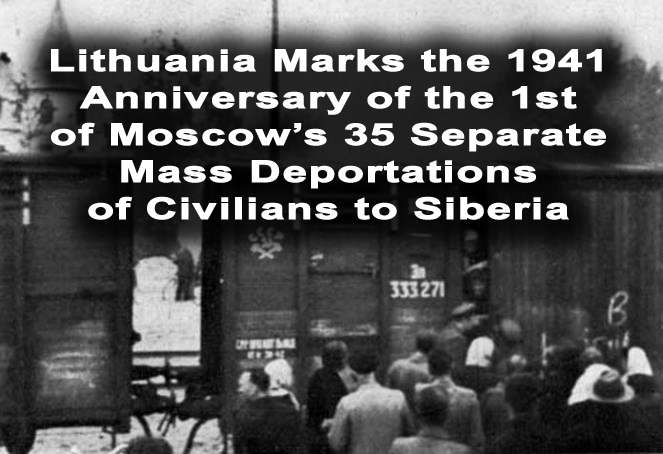 DUBLIN – His Excellency Mr. Marijus Gudynas, Ambassador of Lithuania to Ireland, today led the Embassy in its annual commemoration of the more than 17,500 innocent victims of Moscow’s mass deportation of Lithuanian into the Russian interior in 1941.  Almost 28,000 Lithuanians died in exile.  Most deportees were never allowed to return, dying in the most remote and inhospitable regions of Russia.  Lithuania observes the annual Mourning and Hope Day annually on 14 June in memory of those deported and who died in Russia’s hinterlands.

On 14 June 1941, the first of what would become thirty-five separate mass deportations that formed part of an overall Soviet terror campaign against Lithuanians was carried-out on orders from Moscow.  Of the 17,500 Lithuanians deported at gunpoint by Russian forces an estimated 70% of them were women and children.  Red Army troops also rounded up some 4,500 ethnic Poles in the operation.

While the 17,500 civilians deported in this first mass deportation operation the figure excludes and addition 150,000 Lithuanian partisans that continued to fight for Lithuania’s freedom and independence.

In August 1939, just prior to both Germany and the USSR invading Poland, Nazi Germany and Soviet Union signed the Molotov–Ribbentrop Pact.  The Pact, signed in Moscow at the behest of Josef Stalin, sought to divide Eastern Europe into spheres of influence.  The Baltic states (Lithuania, Latvia and Estonia) were to fall under the sphere of Russian control.  Moscow’s plan to assert its will over the Baltic States was meticulous.  Beginning with “mutual assistance treaties” imposed by threat of force and intimidation, and at times assassination, Moscow was permitted to establish military bases in the Baltic States.  Moscow quickly used these military bases not for the defense against Nazi forces, but against the independent Baltic States and their peoples.  Moscow’s order for the forcible deportation of civilians to labor camps and other forced settlements into the most remote parts of the Soviet Union was an extension of the Kremlin’s plans.  Lithuanians were transported by rail cattle cars, with little food and no heat, into the Russian interior, most notably in the Irkutsk Oblast and Krasnovarsk Krai.  Moscow’s mass deportations served the dual objectives of reducing resistance to the Sovietizaiton of Lithuanians and ensuring Moscow could further exploit Lithuanians through forced labour.

Following the end of World War II, Moscow engaged in the forced migration of ethnic Russians into Lithuania and the other Baltic States, forever changing their historic population makeup.

Following Josef Stalin’s death in 1953, the controlling triumvirate, and later Nikita Khrushchev, began to allow some remaining deportees to return.  Following the final general release of the Lithuanian deportees in 1963, a total of only 60,000 managed to return to their homeland in Lithuania.  Moscow continued to prohibit the remaining 30,000 from returning home, even after 20 years had passed.

Similar deportations took place in Latvia, Estonia, and other parts of the Soviet Union and areas of Europe where Soviet forces occupied following the allied Victory in Europe.  More than 1 million Lithuanians, Latvians, Estonians and Ukrainians were forcibly deported to Siberia on Moscow’s orders.

The deportations and atrocities to which the Baltic States were subjected are still recalled in the once again independent Baltic States of Lithuania, Latvia and Estonia.

Minister Simon Coveney T.D Visits the Gulf to Hold Discussions on a Number of Key Issues for the UN Security Council